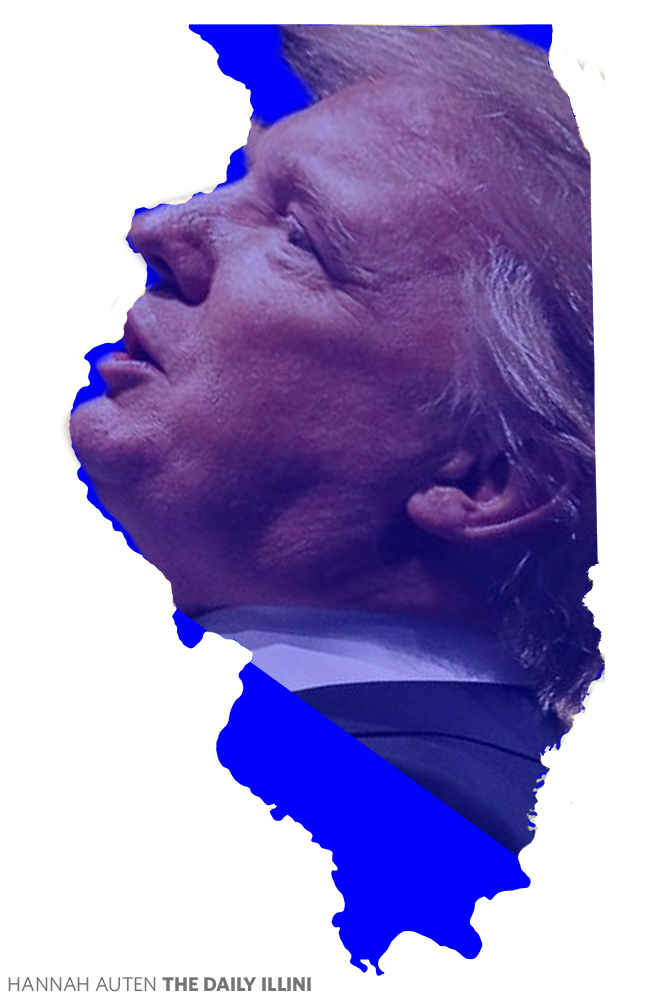 The northwest border of the state of Illinois looks like an outline of President Trump’s face.

Now let’s be clear here: this was supposed to be a column about the football game.

It was supposed to be originally, but I don’t really have the words to talk about it. It was just meh. Lovie didn’t have much more to say besides he couldn’t think of anybody on the team who had a good game. If that is all he can say about it, then I am not going to try and force out words that just aren’t there.

I guess this column has something to do with football, though, if you count the fact that I saw the picture pointing this out on Twitter while I was supposed to be covering the game.

I literally cannot stress the importance of this discovery, and the fact that it was made during an Illinois football game is a claim to fame that no National Championship ring could supply. Think about how excited people get when they see a chip that looks like the outline of somebody’s face, and multiply that by 1 million.

If this would have been brought to my attention before last November, I would’ve bet my life on Trump to win the election. It was the most blatant omen in the history of omens. The man’s face is literally imprinted into the country.

It’s not like some old dude in a powdered wig drew that border line. The majority of that border is made up by the Mississippi River. The river winds along the contours of his face in a way that is too uncanny to be coincidence.

But let’s get back to the fact that this was discovered during an Illinois football game, and just how unlikely that really is. Smack in the middle of Zuppke Field is a big block I encased in an outline of the State of Illinois. That’s where it happened. Some incredibly observant person looked at their TV, and saw our Commander-in-Chief chilling in the best seat in the house.

Illinois football did not play a good game on Saturday, and by all accounts, the game was extremely boring to watch.

But thanks to this hero that made the biggest discovery since the wheel, the game was not only tolerable, but entertaining, because with every dry play that went by, I would start to lose interest and drift off, only to see the outline of Trump’s face on the state of Illinois again.

I could have watched Illinois rush for only 93 yards. But I didn’t have to.

I could have watched Illinois only pass for 99 yards. But I didn’t have to.

I could have watched Illinois defense give up an average of 14.5 yards per catch. But I didn’t have to.

I could have watched Illinois not score one touchdown, despite holding the ball for 31 minutes. But I didn’t have to.

Because any time things got bad, I just looked at the middle of the field, and I laughed.

I was like a baby who had just been handed a bunch of keys. I couldn’t stop. And I have one person to thank for that, and that is the person who sent the Snapchat pointing out the face of the leader of the United States hidden within Memorial Stadium. You may not know what you did, but the history books sure will.