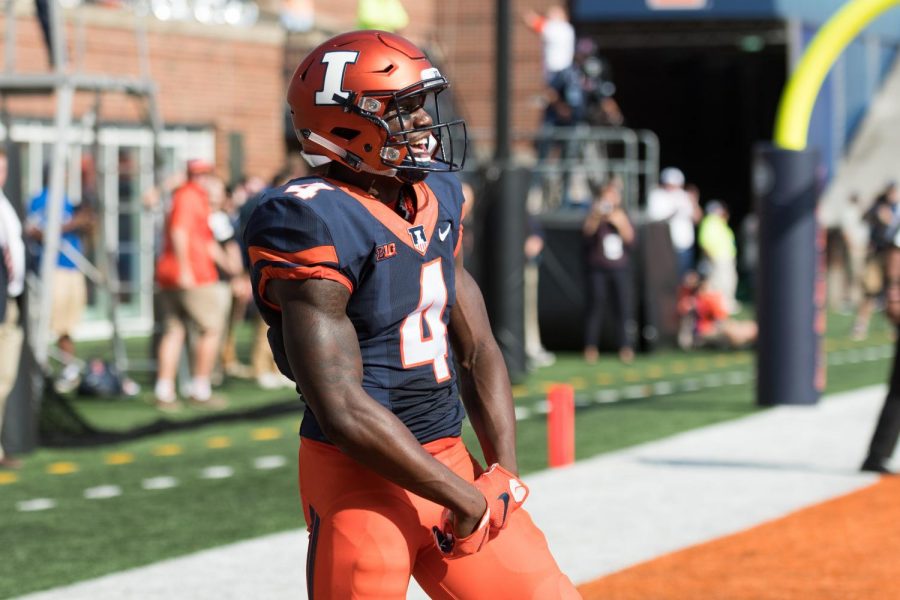 Illini freshman wide receiver Ricky Smalling celebrates after catching a touchdown in the Illini's 35-24 loss to Rutgers. Smalling had 103 receiving yards on the day.

The Illinois football team’s confidence is nothing like what it was after its Week 2 victory against Western Kentucky.

The Illini have lost four-straight games since then to drop to 2-4.

Offensive coordinator Garrick McGee said some of his players have not possessed the same confidence that some of their younger teammates have shown.

“He’s got extreme confidence — something that we don’t have a whole lot of right now,” McGee said. “We have a lot of guys who are very talented, but just true, core confidence they don’t have. Ricky has that.”

McGee said he has called timeouts in the past in which Smalling approached him to question how much the offense wants to move the ball.

He wants the ball in his hands.

It’s that passion that has given McGee and the team reason to be hopeful for what lies in the future.

Smalling said he doesn’t know if he would be playing college football if it wasn’t for his confidence.

The freshman was a three-star recruit out of Brother Rice High School in Chicago. He noted that he has always been the guy a quarterback trusts to go up and get the ball.

The freshman snagged two jump balls for long receptions against Rutgers. He finished with five catches for 111 yards and a touchdown.

McGee said tight end Louis Dorsey is another player who possesses a great amount of confidence.

Dorsey is rooming with Smalling in what they call the “817,” referring to their residence hall room number. Dorsey said he and Smalling have similar playing styles.

“We’re the future of the team,” Dorsey said. “(Having that confidence), that’s just how we play. We’re just trying to have a positive rest of the season.”

Senior wide receiver Malik Turner has also noticed Smalling’s progress early this season. He believes that Smalling is a big factor in the offense now and wonders how much he can produce in the future.

“He’s taking advantage of the opportunity he is given,” Turner said. “He’s got that aggressiveness to go get the ball. He got here a little late in the summer, but he’s caught on and been a major contributor to the offense.”

Smalling’s confidence has also caught head coach Lovie Smith’s attention. Not only does Smith like the confidence he has, but he also enjoys the freshman’s physicality on the field.

“He’s a big, strong receiver who can really catch the ball,” Smith said. “Looking for some positive things, I thought Ricky competed hard and took another step (against Rutgers).”

McGee said he hopes starting quarterback Jeff George Jr. will be looking for a certain member of the “817” when the team travels to Minnesota this weekend. He wants Smalling’s confidence to stay high but not enough to overtake his job.

“When (Smalling) becomes a junior, I’ll probably have to tell him to get out of my face,” McGee said. “He’ll probably be saying ‘You gotta throw me the ball every time.’”