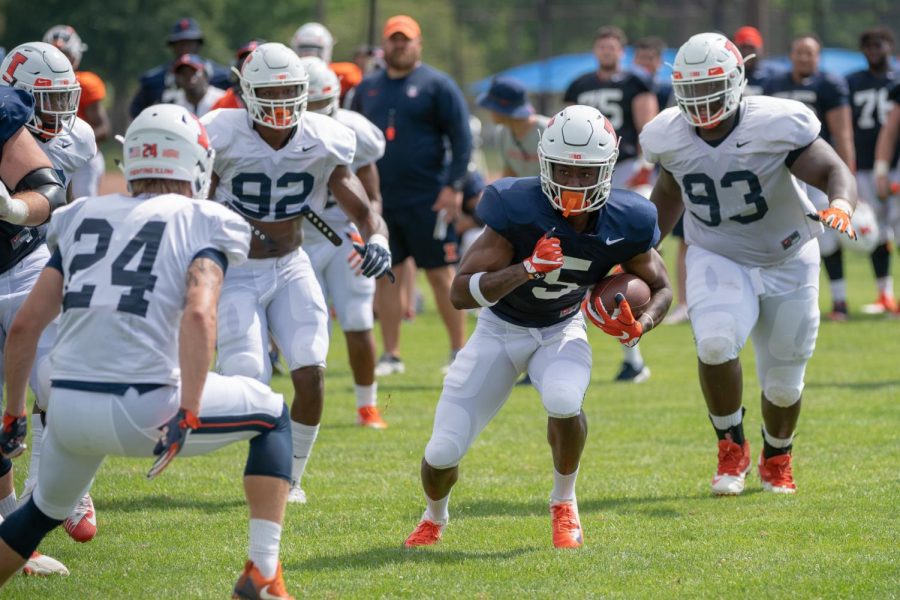 Illinois sophomore wide receiver Carmoni Green tries to avoid defenders after making a catch at Illinois training camp on August 8, 2018. Green looks to have a strong season after an underwhelming freshman year. Photo by: Illini Athletics

Half of sophomore wide receiver Carmoni Green’s receptions in 2017 came in one game.

It was a season where head coach Lovie Smith played more true freshmen than any other team in college football, yet the four-star (Rivals) recruit out of Miami didn’t find his breakout performance.

On Nov. 7, 2017, Green caught four receptions for 28 yards against Iowa, the best game he would have all season. Take a step back and look at his season numbers, and he only got his hands on the ball eight times for a total of 75 yards.

Now, Green is surpassing his freshman season total in yardage almost on a daily basis at Illinois football training camp. A year has made all the difference for the 6-foot-1 wideout and, no matter who is up at quarterback, Green is making plays.

“My offseason, it was very intense,” Green said. “When I went back home to Miami, I put in a lot of work every day to try and get better. I see the improvement when I come out here every day.”

The improvement led to not only more reps for Green, but more looks on the deep ball as well. No receiver has been targeted down the field more than Green during this Illini training camp run.

Whether it be a 45-yard dime from freshman quarterback Matt Robinson or an extended grab that came off the hands of probable starter AJ Bush, Green is connecting with his quarterbacks.

While Green has garnered growing attention from players and staff alike, he has been sure to notice his personal improvements as well.

“My route running has got extremely better,” Green said. “I know how to set guys up quicker and know when to take it off and cut it back on and things like that.”

wThe work Green has said to put in during the offseason continues to pay off and the receiver has no lack of confidence in his skills. Speed, route running and a knowledge of the game are the qualities Green will use this season to describe what he brings to the team.

As the kickoff against Kent State nears its Sept. 1 deadline, Green wants to do all he can to prove his worth. And while many of his receptions have come down the field, he wants to assure his teammates he can make plays anywhere.

“I want to be able to stretch the field,” Green said. “But also I want to be an all-around receiver, like a great route runner, just a guy that you can count on in tough situations. I want to be that guy.”