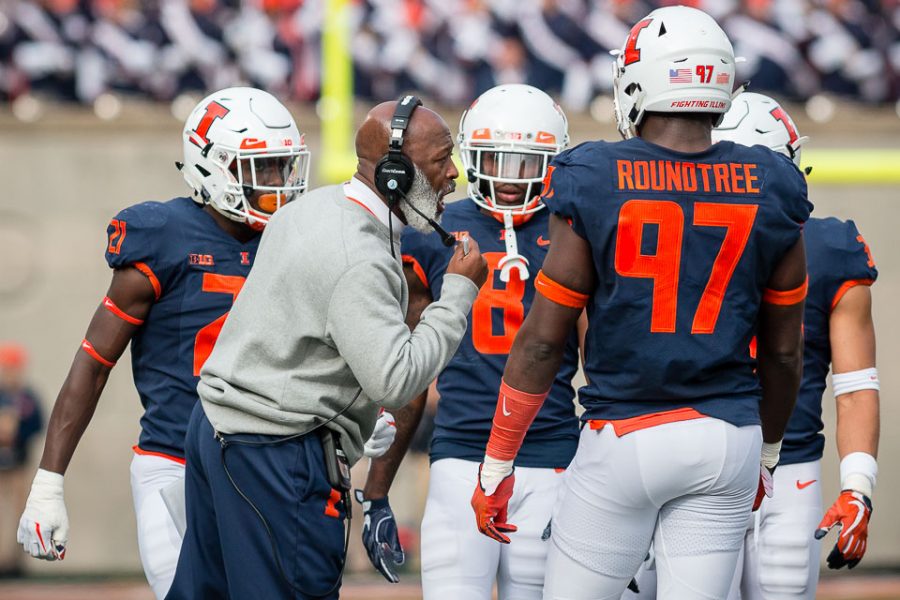 Illinois head coach, Lovie Smith, talks to his team during the game against Minnesota at Memorial Stadium on Nov. 3. The program announced Friday it had recruited University of Miami wide receiver, Jeff Thomas, for the 2019 season.

The Illinois football program announced Friday that after spending the last two seasons at the University of Miami, wide receiver, Jeff Thomas, will be making the move back to Illinois.

Thomas signed a Big Ten Tender of Financial Aid and plans on enrolling at Illinois in the spring, according to fightingillini.com.

“We recruited Jeff extremely hard out of high school and when he contacted us about the possibility of returning home, we were immediately interested in making his wishes come true,” Smith said. “We will fully support his efforts for immediate eligibility at Illinois.”

While Thomas still has two years of eligibility under NCAA rules, it remains unclear whether he will be able to suit up in 2019 for the Illini.

The 5-foot-10, 175-pound former All-State player collected 52 receptions for 937 yards and five touchdowns during his two years at Miami. This season, Thomas racked up a team-high 35 catches for 563 yards in 11 games.

Thomas graduated from East St. Louis High School as a four-star recruit and the No. 40 player in the class of 2017. He was ranked as the No. 5 wide receiver in the country and the No. 2 player in Illinois.