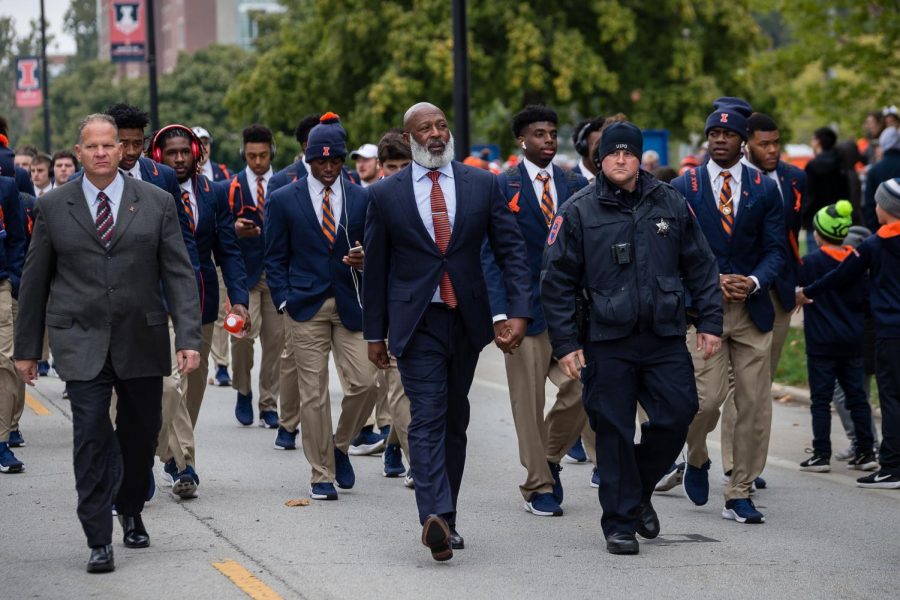 Illinois head coach Lovie Smith walks with his team down First Street before the game against Purdue at Memorial Stadium on Oct. 13. Georgia tight end Luke Ford has announced he is transferring to Illinois due to familial reasons.

Players returning home after testing the waters down south has been a common theme this offseason for Illini football.

Georgia freshman tight end Luke Ford from Carterville, Illinois, announced via Twitter on Friday he is transferring to Illinois. Ford follows in the footsteps of East St. Louis wide-receiver Jeff Thomas, who made the decision to transfer to the University after two seasons at Miami. While the reason for Thomas leaving Miami is a bit clouded, Ford made his reason for leaving Athens, Georgia, very clear through his Twitter message.

Ford, like Thomas, was a highly-regarded four-star recruit (No. 51 in the 2018 class per 247sports.com) who had several high-major schools looking his way, including Auburn and Alabama.

Ford finished his freshman season at Georgia with a single 4-yard catch in its opener against Austin Peay, but did appear in nine games total. His lack of production may have stemmed from being stuck behind Isaac Nauta, a former five-star recruit who put up 430 yards receiving and four touchdowns for the Bulldogs this fall.

Whether or not Ford was going to leave Athens was unclear until Friday’s announcement. He was unsure of how things would play out as recently as postgame interviews after the Sugar Bowl on New Year’s Day.

“I could for sure see myself staying,” Ford said in an interview with 247sports.com. “I’ve got to talk to the coaches. There’s no doubt in my mind I could do that. Then there’s also the reason: for family, to go home. With my grandpa getting more and more sick, I want him to see a couple of games. It’s hard for him to make a 10-hour drive or flight or something like that. I want my family members to come to all my games.”

Ford’s eligibility for the 2019 season will depend on if he seeks the NCAA family hardship waiver and whether or not that waiver ends up passing.

In 2018, the Illini tight end group was led by freshman Daniel Barker, who totaled nine catches for 84 yards and a touchdown. So far in the 2019 class, Griffin Moore, a three-star prospect from Bloomington, Illinois, is the only tight end committed or signed, as he officially joined the program on early-signing day.