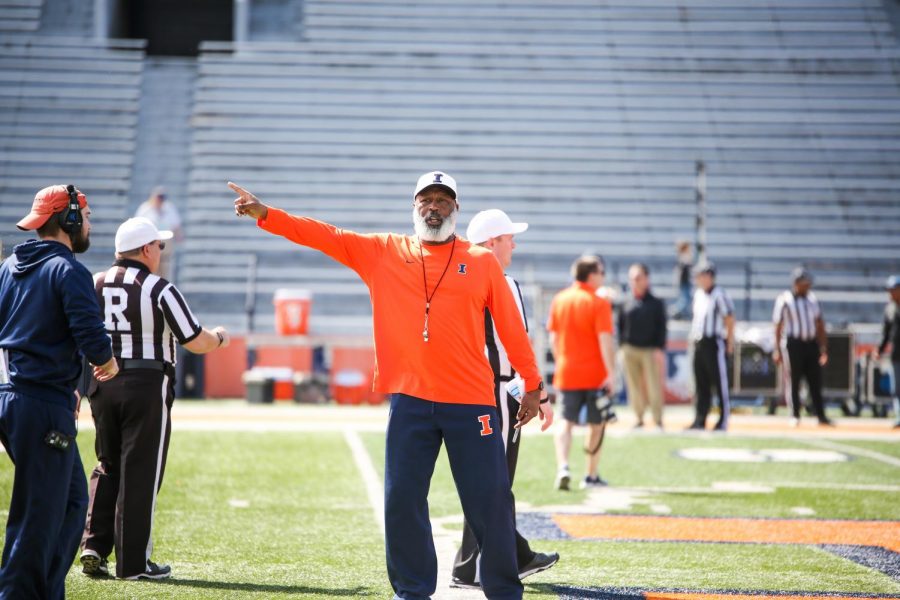 It may be head coach Lovie Smith’s fourth year in charge of Illinois football, but Saturday will mark the program’s first spring game with Smith at the helm.

With three returning scholarship quarterbacks healthy and on the roster — a first since Smith has been in charge — Illinois finally thinks it has the depth needed to be able to have a true spring game.

Though the atmosphere Saturday at Memorial Stadium will likely feel much more like a soft opening rather than a grand reveal of measured progress, the spring game is an opportunity for the program to celebrate recent recruiting momentum while assessing its available depth in a live-game setting.

Offensive coordinator Rod Smith still thinks Illinois needs to add more depth and develop talent throughout the roster, but he thinks the program is in a better spot than when he arrived.

“We got more depth probably than we had at this time last year,” Rod said. “I wouldn’t say our depth is deep but I think it’s enough. That’s Lovie’s call. Lovie is the one who makes the call on that as far as what type of game it’ll be on Saturday.”

Newly minted cornerbacks coach Keynodo Hudson is eager to get a less filtered look at his group, which returns veteran junior Nate Hobbs and has a host of younger talent.

Hudson said Saturday will give the staff tape it can use to make evaluations for how players have progressed through the spring since the end of the season.

“It’s to build depth and see where these guys are going to fit in at the depth chart, as far as building the two-deep for us,” Hudson said. “From an offensive perspective, a defensive perspective and also in the kicking game, this gives us a tremendous opportunity to get out, put it on tape and be able to evaluate all these young guys when we get back in the office on Sunday.”

While Hudson’s group has some compelling personnel questions that could be answered to an extent on Saturday, fourth-year wide receivers coach Andrew Hayes-Stoker wants to see someone emerge from his inexperienced crop of receivers.

Illinois only returns one proven Big Ten receiver in soon-to-be junior Ricky Smalling, who led the team with 406 receiving yards and five touchdowns on 33 receptions.

Smalling caught two touchdown passes against Penn State and had a season-high seven receptions for 72 yards and a touchdown at Northwestern, but Illinois struggled to find consistent production at receiver last fall after Mike Dudek went down with another season-ending injury.

Hayes-Stoker said Smalling has showed the most in spring practice so far, but he was clear playing time is up for grabs.

“Right now, there are a lot of jobs that are open and available; nobody has really solidified anything,” Hayes-Stoker said. “If you say there’s one guy that’s made more plays than anybody, I think it’s Ricky at this point in time right now. Even his job right now, if somebody comes in and competes, he’s got to step up too.”

While nothing will be solidified after Saturday, he and other staff members will be taking careful note of how players perform.

“I think somebody’s got to step up,” Hayes-Stoker said. “I’m looking for guys that are going to come in and take a role.”

Illinois hasn’t had many opportunities to shine a positive light on the program over the last few springs, but the team’s Junior Day on Saturday featured more live ball than usual and the Illini got four commits in the ensuing days.

The program will once again be playing host to an ensemble of highly touted recruits and Illinois wants to give them something to look forward to and imagine themselves contributing to down the road.

To make those good impressions and further the pitches to interested prospects, the Illini will look to showcase an offense more comfortable playing at Rod Smith’s high tempo and a defense that can improve from a disappointing fall.

“(Last weekend) stressed guys and guys were forced to make decisions going high-speed and we saw some guys make errors,” Hayes-Stoker said. “I’d like to see guys clean some of that stuff up and be able to function and make the right decision when we’re pressing for pace.”