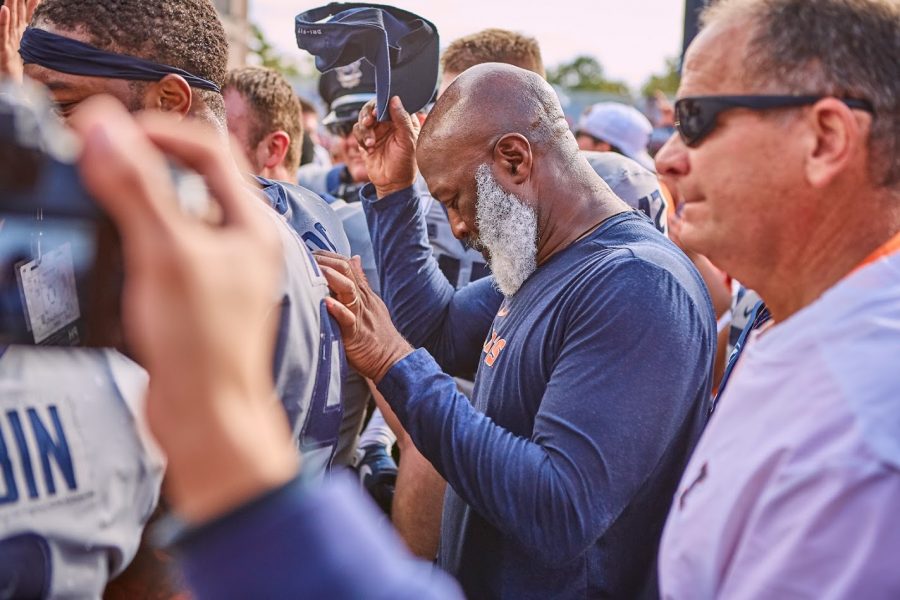 Lovie Smith takes off his hat after the Illini upset the Badgers at Memorial Stadium on Oct. 19.

A year in the college football world is like a decade in the normal world. The constant turnstile of the coaching carousel and the continuous changes of a team’s narrative seemingly overnight is a part of what makes the sport so popular.

Last year, Illinois football head coach Lovie Smith was tied for the 10th-most-expensive college football contract in the country. His $5 million total salary put him ahead of leaders of blue-blood schools such as Oklahoma’s Lincoln Riley ($4.8 million) and the University of Miami’s Mark Richt ($4.05 million).

This year, Smith doesn’t even crack the top-25 in the highest-paid coaches category. With his $4 million total pay this year, Smith is ranked 29th in the country, tied with Louisiana State University’s Ed Orgeron who is currently 9-0, coming off a convincing victory against Alabama in Tuscaloosa and ranked #1 in the country.

Smith is the 10th highest-paid coach in the Big Ten, despite only eight conference victories during his tenure as head coach, including an 0-9 conference record in 2017.

Clemson skipper Dabo Swinney overtook Alabama’s Nick Saban this year for the number one spot in total pay, as Swinney will rake in $9.25 million, following three College Football Playoff appearances in four years. Saban is a close second as he will make $8.85 million and Harbaugh rounds out the top three with a total salary of $7.5 million this year.

After signing a six-year $21 million contract in 2016, Illinois Director of Athletics Josh Whitman extended Smith’s contract by two years last year, tying him to the Illini through 2023. In addition, Smith’s offensive coordinator, Rod Smith, earned a $200,000 raise, which brings his salary to $700,000 this year. Rod will get an additional $50,000 next year.

Faith in Lovie had begun to waver among Illini fans after starting out 9-27 in his first three seasons at the helm. And after a heartbreaking loss to Eastern Michigan early this season that started a four-game losing skid, the heat under Smith’s seat was hotter than ever.

But this is college football, and anything can happen, like when the Illini pulled off an upset over the then-ranked No. 6 Wisconsin Badgers as 30.5 point underdogs, marking the Big Ten’s greatest upset since 1982. Illinois football has not lost since the time of this writing, riding high on a four-game winning streak, including the largest comeback in program history (25 points) in a thrilling matchup against Michigan State, that gave way to the Illini’s first bowl appearance in five years, and the first under Smith.

What a difference a year can make.