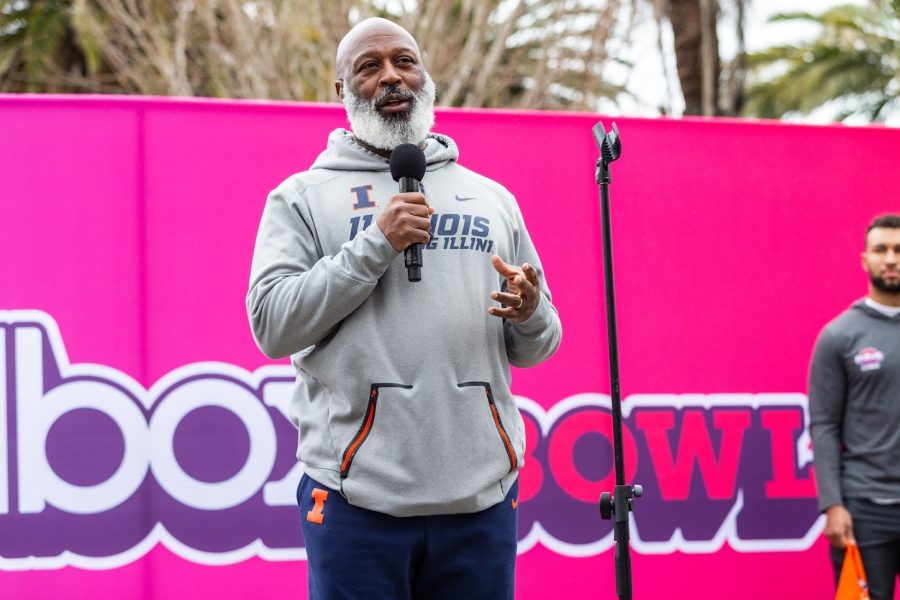 On Friday, the NCAA restricted on- and off-campus recruiting visits, handcuffing the Illini’s football recruiting efforts on the transfer market.

Last season, Illinois found lots of success in the transfer portal, including its starting quarterback (Brandon Peters), a pair of starting wide receivers (Josh Imatorbhebhe and Trevon Sidney), a starting offensive guard (Richie Petibon) and a starting defensive end (Oluwole Betiku). Illinois also relied heavily on Milo Eifler as a linebacker, who transferred to Illinois before the 2018 season. Eifler played the previous season at Washington and was forced to sit out the 2018 season because of NCAA transfer rules.

Heading into the 2020 season, Lovie Smith’s team expects Peters, Imathorbhebhe, Sidney and Eifler to all be starters on their respective sides of the ball. In addition, Illinois will play redshirt sophomore tight end Luke Ford this season after the NCAA denied his hardship waiver request over a year ago. Ford transferred from Georgia to be closer to his family who lives in Carterville, Ill.

Illinois football has given itself the nickname ‘Grad-Transfer U’ on social media graphics because of the success they had on the transfer market last winter and the immediate success transfer players had in an Illinois uniform.

Illinois has already landed one grad-transfer this offseason with the commitment of Wisconsin grad-transfer Christian Bell, an edge rusher who has the ability to play defensive end and linebacker. In three seasons with the Badgers, Bell recorded eight tackles, two tackles-for-loss and a forced fumble.

While not having the most impressive statistics, Bell is one of the more talented players the Illini will have for the 2020 season. According to 247Sports recruiting ranks, Bell has the 13th highest-ranked high school recruiting ranking on the Illinois roster. Adding talent is never a bad thing, and at the very least, Bell adds depth at a position of need for Illinois.

However, this Illinois coaching staff isn’t done recruiting grad-transfers, which is a good thing because there are still holes at important positions on the 2020 roster.

Illinois lost three of their top four defensive tackles with the graduation of Jamal Milan, Tymir Oliver and Kenyon Jackson. That puts a lot of pressure on juniors Calvin Avery and Jamal Woods to stay healthy and produce. According to 247Sports, Illinois has sent coaches to visit Stanford grad-transfer Jovan Swann during the winter. Swann has totaled 14.5 tackles for loss and 8.5 sacks. Swann would have an opportunity to start on the Illini defensive line immediately and could play the three-technique, replacing Milan.

Illinois has a proven offensive line that will be one of the better offensive lines in the Big Ten in 2020. Illinois returns junior Kendrick Green, senior Doug Kramer, senior Alex Palczewski and senior Vederian Lowe to anchor the offensive line. The problem: Kramer, Palczewski and Lowe all graduate after 2020, and Green has the potential to leave early for the NFL. The Illini are looking for immediate help on the offensive line at right guard to replace Petibon. If training camp started today, there would be a competition between sophomores Verdis Brown, Jordyn Slaughter and Julian Pearl for the starting right guard spot while still exploring graduate transfers.

According to 247Sports, Illinois has shown interest in Akron transfer Brandon Council, but Council is drawing interest from traditional powers like LSU, Auburn and USC. UCLA transfer Chris Murray has two years of eligibility remaining but could potentially have to sit out one year if the NCAA doesn’t revise their transfer rules in April when the NCAA voted to allow players to transfer once without penalty.

The need at offensive line isn’t as big as defensive tackle, but Illinois needs to begin planning for 2021 and beyond with the offensive line. Linemen take longer to develop than other positions because it requires more strength and technique to be as impactful as skill players.

Wide receiver is another position Illinois needs to begin to look beyond 2020. Assuming Illinois stays healthy at receiver in 2020, the Illini will start three senior wide-outs in Ricky Smalling, Imatorbhebhe and Sidney, an impressive trio that is one of the best in the Big Ten. After 2020, the Illini have questions to answer at the receiver position, too. In 2019, freshman Casey Washington showed potential, grabbing 11 receptions for 132 yards, and sophomore Donny Navarro had 27 receptions, 345 yards and two touchdowns.

Smith has upgraded the talent level and raised the floor of Illinois football during his four seasons at Illinois, but for his program to have sustained success recruiting becomes important. Illinois has had small recruiting classes in 2019 and 2020 because of scholarship limitations. Landing transfers have allowed Illinois to fill the holes on the roster, and Illinois needs to continue to explore the transfer portal to add depth at key positions on the roster.