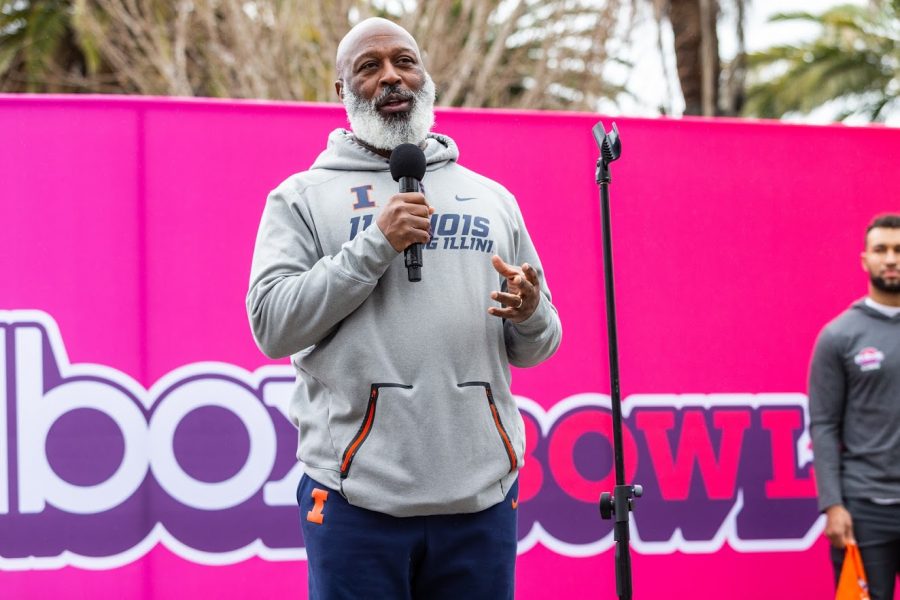 Lovie Smith became the head football coach at Illinois in the spring of 2016. Because of the timing of his hiring, Smith’s first recruiting class came in 2017. In his three full recruiting classes, only 20 players have come from in-state high schools. In the 2019 and 2020 recruiting classes combined, only five players are from Illinois, and none of those five are in the 2020 class.

Illinois is struggling to get in-state prospects to sign with its state school. Smith said in December that Illinois made offers to 19 in-state players in the 2020 class, but none signed with the Illini.

Relationships are everything in recruiting, and Illinois is clearly struggling to develop strong relationships with in-state recruits and high school coaches across the state.

Illinois made a strong push for East St. Louis safety Antonio Johnson, ranked 78th in the country, but he is leaving for Texas A&M.

Illinois is going to struggle to out-recruit traditional college football powers, like Texas A&M and Michigan, but they should be able to better compete for recruits with schools like Iowa and Northwestern. Of the top 20 in-state players, eight decided to sign with Northwestern or Iowa.

It should also be noted that Illinois’ last two recruiting classes have been smaller because of the large amounts of rising juniors and seniors on the current roster. However, the 2021 class is going to be a big class, due to the fact that 25 seniors are set to graduate after the 2020 season. To have a strong 2021 recruiting class, Illinois needs to improve its relationships with in-state recruits and coaches.

One in-state wide receiver Illinois made a priority was Plainfield North product Marcellus Moore; he signed with Purdue. What makes him an attractive prospect is his superior speed — Moore runs a 4.35-second 40-yard dash.

“In my 13 years of coaching I haven’t had a relationship with U of I at all,” said Plainfield North head coach Anthony Imbordino. “U of I hasn’t really come up as much as you would think to the schools that I have been to in the Chicagoland area.”

Another top player in Illinois that the team prioritized was Kevo Wesley, an offensive lineman from Curie Metropolitan in Chicago. Wesley listed the Illini as one of his top schools late in his recruitment, but he eventually committed to Vanderbilt.

Assistant coaches on college staffs do the majority of the recruiting. Illinois’ running backs coach Mike Bellamy receives a lot of the in-state recruiting responsibilities because of his in-state connections. Grazzini says he hasn’t spoken to Bellamy in his time at Curie.

“I have never met Coach Bellamy,” Grazzini said. “We are talking about building that relationship. Usually, they pop in and say, ‘anything you need.’ I look forward to meeting Coach Bellamy. Hearing what he has to say, (about) Illinois’ future, their plan, so I can sell it to the kids like I sell them every option.”

Even though Imbordino says he hasn’t developed a relationship with the Illinois coaching staff, he says Smith came to Plainfield North to recruit Moore in an effort to build relationships, but the coaching staff doesn’t have the presence in the Chicagoland area as large as Northwestern or even Northern Illinois.

“Northwestern has done a tremendous job in the last decade of its recruiting of the state of Illinois, in particular,” said Grazzini.

In the last decade, Illinois has had three different head coaches: Tim Beckman, Bill Cubit and Lovie Smith. Grazzini says Smith is doing a better job than Beckman did.

“I don’t know anyone in (Chicago Public Schools) that ever saw Tim Beckman,” Grazzini said. “I would say that Lovie and his crew are doing a far (better) job in-state, in particular being seen in CPS.”

Each of the Chicagoland coaches say a great way for Illinois to build strong relationships is to host more camps for high school players to participate in because it allows the Illinois staff to meet players and coaches from across the state.

The last two seasons that Illinois played in a Bowl Championship Series game were 2007 and 2001, and each of those teams was filled with homegrown players that were key contributors to the team’s success.

Grazzini believes Illinois could take a significant step to compete at a higher level if it could recruit the state of Illinois better.

“A lot of schools who are successful win their state,” he said. “I think winning your state is really important. I think your school being the number one option in your state is always important … because when you have that mega kid you have a chance at that kid.”