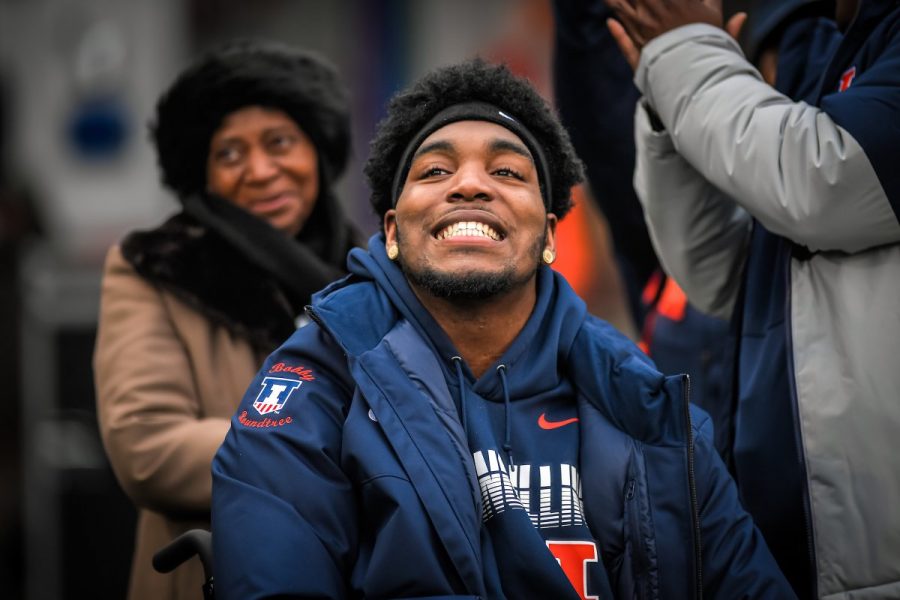 Junior Bobby Roundtree attends the final home football game of the season against Northwestern on Nov. 30, 2019.

Under blue skies and immense pressure, junior kicker James McCourt lines up for a 39-yard field goal down by two. A successful attempt results in a program-saving upset over the undefeated and No. 6 Wisconsin Badgers while cooling down Lovie Smith’s hot seat talk.

The ball is snapped, and McCourt drills the ball right down the middle with no time remaining. The tortured and frustrated fan base storms the field as the 3-4 Illini stunned the Badgers, 24-23.

Understandably, after securing its biggest win since knocking off the No. 1 Ohio State Buckeyes over a decade earlier, the postgame party in the locker went wild, with players dancing and celebrating the program’s victory that sent a message to the college football world. With music blasting, though, there was one message that went unnoticed: Bobby Roundtree’s calls.

“When we beat Wisconsin, I was calling everyone, trying to get in,” Roundtree said. “Finally Ayo (Shogbonyo) called me, and I was like, ‘thank god.’ They all said this one is for you, and it felt good they let me in on my fun. I didn’t know how to call because they were all dancing. The people in the hospital were all looking at me like, ‘What’s going on?’”

On May 18, 2019, in a swimming pool near his home of Largo, Florida, Bobby Roundtree suffered a devastating spinal cord injury that left him paralyzed from the legs down, ending his promising football career.

For a lot of people, enduring a situation like this would cast a permanent shadow over one’s life. People question why this happened to them as well as their purpose in life. Instead, Roundtree has kept a positive attitude throughout his entire process, inspiring a community and fan base through his toughest challenge yet: relearning to walk.

Since getting released from the hospital, the University of Illinois, along with other rehabilitation centers, has helped Roundtree in his mission to walk once again, with physical therapy programs aimed to get him going. Head football athletic trainer Jeremy Busch, who has been with Roundtree during this whole process, can’t believe the amount of progress he has made.

“He is far ahead of schedule in terms of what he’s trying to do,” Busch said. “Everyday he continues to break down another barrier and accomplish another goal. Whatever goal we set for him, he will attain it.”

Roundtree has started to use stand-up machines, which has helped him put some weight on his legs once again, as well as using bikes and vibration plates while trying to strengthen his core. Roundtree just wants to be as creative as possible and utilize all types of therapeutic workouts he can do independently.

“A lot of therapists have been telling me putting weight on your legs again has a lot of benefits,” Roundtree said. “But also, working on the core, you need that (strong) core. I’ve just been looking at new things that I can do without having an actual therapist here with me. Trying to do more things and more weight on things that I used to not be able to.”

As a player, Roundtree had an immediate impact on a struggling defense. Head coach Lovie Smith, known as the master of the Tampa 4-3 defense, used Roundtree’s talent to help tighten his defense that was getting gashed by Big Ten offenses. A monster on the field, Roundtree helped lead a rebuilding Illinois defense with his ability to rush and sack quarterbacks and swat down passes. After his sophomore season, Roundtree was honored with the Dick Butkus Outstanding Defensive Player Award, generating some NFL buzz.

Roundtree admits after the accident, he experienced some dark times. Constantly being told how strong he was, drugged up on medication and weight loss put Roundtree in a surreal experience he didn’t think he would ever have to face. But during times of struggle, Roundtree was able to learn about himself and realize what needed to be done if he wanted to reach a point in his life where he could take more responsibility.

“Having that independence again, I’m not used to having my mom and everybody caring for me and doing things for me that I can’t do,” Roundtree said. “I’ve got goals. I want to travel. Just seeing how I used to be, I lost so much weight and I was so weak. You’ve got to put in a lot of work to get stronger and get back on your feet. I love working. I hate sitting around. I hate when they say I can’t work out. I’m just a go-getter.”

While Roundtree has focused on trying to learn how to walk again, he hasn’t cut ties with the football program he loves. It was just last year when Coach Smith accomplished his goal of getting him back to campus for a game. Roundtree gave an emotional speech prior to kickoff against Northwestern, encouraging the team to play with tenacity. While Roundtree continues to have an impact on his teammates, their love for their defensive leader hasn’t wavered, either.

“They’ve been very supportive,” Roundtree said. “They know I’m gonna work. I know they’re gonna work. We’ve got each other’s backs. Some of them spent nights in the hospital when I was in Chicago, taking the time out of their Fridays or Saturdays or even Sundays to come see me. It meant a lot to me that I didn’t always have to be in the hospital by myself. It was just a blessing to me to have my coaches, teammates and trainers come check me out to see how I was doing and how I was with everything. I wouldn’t trade it for the world.”

During a time of despair given the death and economic hardships Americans are facing right now, Roundtree is a textbook example of how to deal with a crisis that feels like it will crush you. Roundtree, who had an NFL career waiting for him, has put aside his sorrow and put himself on a path to secure his goal of being able to walk again.

“There’s a reason for everything. Hard times don’t last forever,” Roundtree said. “You know, there are people out there that have worse things (happen) to them. Be grateful for what you’ve got going on and keep pushing through it. Just find something throughout your day that’s positive that’s going to keep you going. You’ve got to stay hungry. You’ve gotta keep that juice, that’s what I say.”