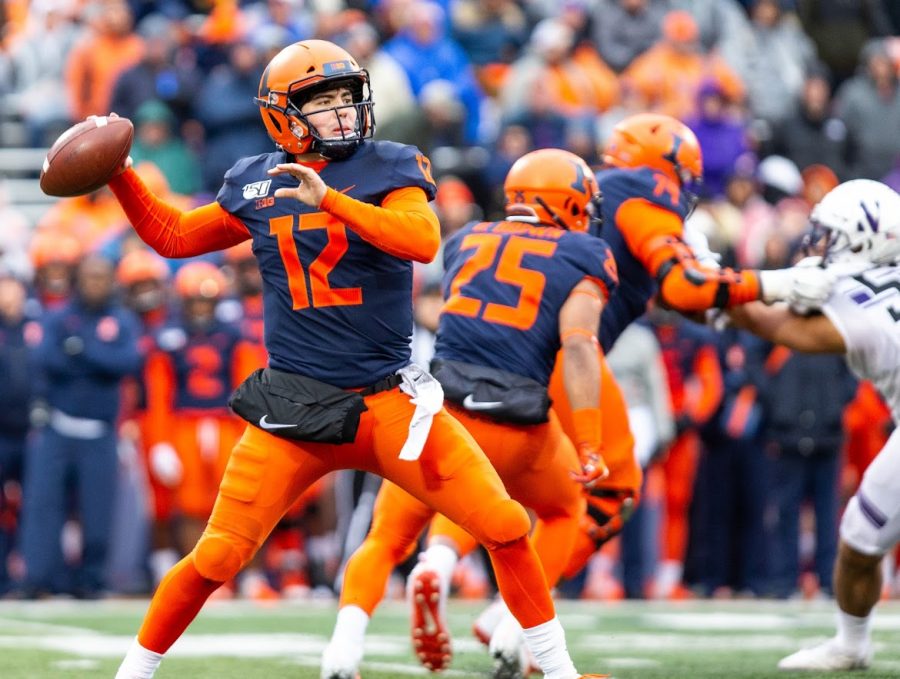 Redshirt freshman Matt Robinson throws a pass during the match against Northwestern on Nov. 30, 2019 at Memorial Stadium.

The Big Ten, most likely, has decided to enact a conference-only schedule for all fall sports as the conference tries to eliminate long distance traveling and have a universal method for testing its athletes.

Multiple sources within the league say there is widespread want for a ten-game regular season for football. Regarding the gridiron, that means some high profile games will be cancelled this season, which includes Ohio State at Oregon, Penn State at Virginia Tech and Notre Dame taking on Wisconsin at Lambeau Field.

As for Illinois, their three non conference games against Illinois State, UCONN and Bowling Green will be cut from the schedule. This is a big blow to Group of Five teams as many of those schools rely heavily on getting paid to play road games against big schools. Bowling Green has lost the agreed upon $2.2 million by Ohio State to play them in September.

Yesterday, the Ivy League canceled all of its fall sports for the 2020 season, but they are less financially dependent on their athletic departments. As of now, this seems like a compromise the Big Ten made with themselves on how to still bring in revenue while keeping its student-athletes protected from the virus. While the Big Ten is the first conference to announce a cancellation of its non-conference portion of the season, it’s expected that other Power Five conferences will follow their move.

If it’s a 10-game regular season, every school in the Big Ten would play every team in their respective division and four crossover games instead of three. Right now, Illinois is projected to Ohio State, Rutgers and Indiana as crossovers with an extra game against either Maryland, Michigan, Michigan State and Penn State looming. While a Big Ten championship will likely take place if the season doesn’t get cancelled, the whole postseason bowl structure has been thrown into complete disarray as getting six wins to become bowl eligible has changed.

Illinois, who hasn’t had a winning season since 2011, will now have three less chances to achieve it.