Isaiah Williams may get chance to showcase ability 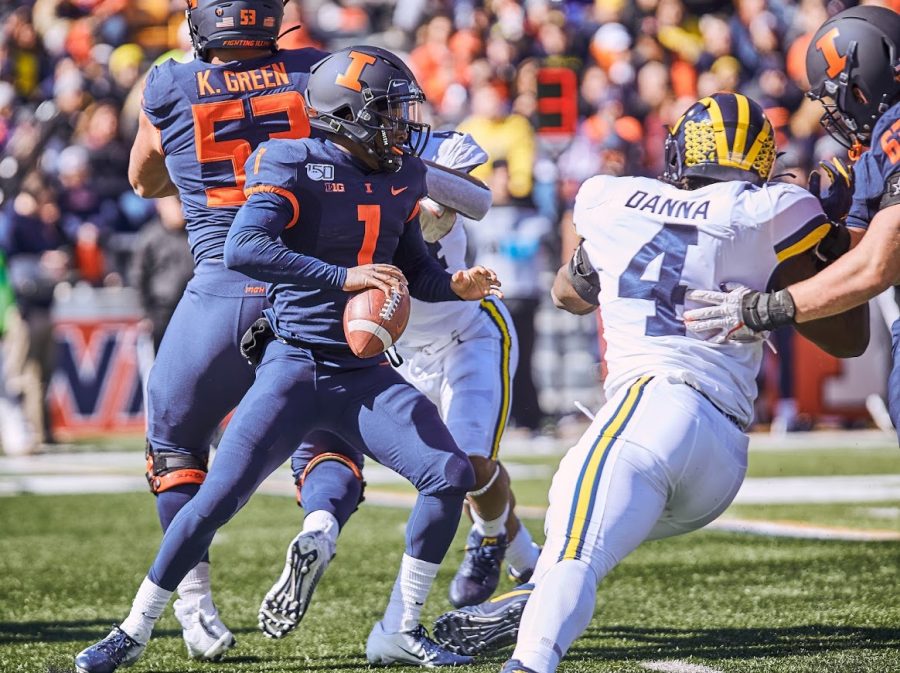 Redshirt freshman quarterback Isaiah Williams scans the field during the game against Michigan on Oct. 12, 2019, which Illinois lost 42-25. Williams may start as quarterback against Rutgers on Saturday.

While senior quarterback Brandon Peters has one more week until he’s cleared to play, the Illini will have to rely on one of their backups to spark the offense again, and head coach Lovie Smith seems to have his mind set on who it’ll be.

“I have an idea, (and) it’s pretty clear,” Lovie said. “But you still go through practice and find things out.”

Peters is obviously out. The Illini have yet to comment on the status of sophomore Matt Robinson, who suffered an ankle injury against the Boilermakers. Sophomore Coran Taylor, who showed flashes of talent against Purdue, is still the fourth-string quarterback. It appears redshirt freshman Isaiah Williams will get a chance to start his first game.

The St. Louis native came to Champaign last season with a lot of hype; the four-star recruit received offers from Alabama, Clemson and Ohio State.

Regardless of the offers from college football’s premier programs, he chose Illinois because he would be given the chance to play quarterback, despite his size. He didn’t want to move to defensive back or wide receiver. His action so far, however, has been limited.

Despite playing four games — where he finished with just four pass attempts — Williams was able to redshirt the season and remain a freshman this year. And this season, Williams’ only action came throughout the Wisconsin game before he was sidelined due to COVID-19 exposure.

While Williams was out of practice for a couple of weeks, the staff doesn’t sound alarmed if he jumps right back into the offense.

“He’s with us every time we have meetings,” said offensive coordinator Rod Smith. “He’s getting all of the coaching in the film room that Coran and everyone else is getting. He’s had enough (physical) reps to know what we are doing.”

This week’s opponent, Rutgers, is one of the most improved teams in the Big Ten. After not winning a conference game for two seasons, the Scarlet Knights are 1-2 after upsetting Michigan State 38-27 in Week 1. And in its two setbacks — undefeated Indiana and Ohio State — Rutgers played competitively, so if Williams does get the start, it won’t be easy.

The problem with Williams is he’s never been given a full game to show what he’s got. In the Badgers game earlier this season, the offensive staff gave him few opportunities to show his throwing ability. Instead, they elected to run a wildcat-like offense, where the St. Louis native was limited to handing off the ball.

The biggest question mark with Williams is his arm. Williams has only completed three passes for 38 yards and two interceptions in an Illini uniform. But that’s during limited action, and Rod said the redshirt freshman has improved.

Williams has the potential to be a good fit for Rod’s offense. The offensive coordinator has a long history of coaching scrambling quarterbacks from West Virginia, Michigan and Arizona. Players like Pat White, Denard Robinson and Khalil Tate all thrived under Rod’s system and were regular 1,000 yard-plus rushers. Williams, too, has the mobility to replicate similar results.

But this year may not be the year for Williams. Once Peters is cleared to return, he will most likely retain his position, but Peters is a senior this season and will likely leave Champaign after the season. Being 0-3 already, Peters isn’t the future. One of his backups is.

While Taylor made some plays against Purdue, he doesn’t come near Williams’ natural talent, and Robinson doesn’t fit as well into Rod’s offense. For the 2021 season, Williams will probably have the chance to play a full season, and for this weekend, Williams might have the chance to give Illini fans a sneak peek of what’s to come.