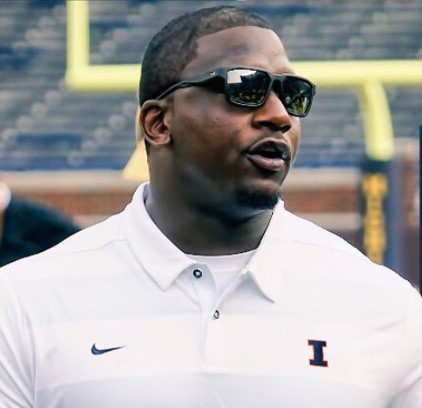 Tank Wright has recently been named the new Director of Football Strength and Conditioning.

He likes to go by the name Tank. He rejected NFL offers to become a strength and conditioning coach for college programs. He married his longtime girlfriend in a college weight room. He’s very unconventional.

However, hiring Tenarius “Tank” Wright, who loves to see others improve in life and football, as the program’s director of strength and conditioning was the most conventional, slam dunk hire Bret Bielema could make.

Tank is a man who’s very secure with himself. Growing up, Tank was physically gifted and knew he had a chance to become a great football player. He knew he had the opportunity to make a career out of the game. But instead of competing against his competition, Tank always felt the need to bring others along and act as a leader.

“Growing up, I would teach guys my secrets, teach guys my work ethics, tell them how I eat in the morning and that translated all the way through college,” Tank said.

After a productive collegiate career under Bobby Petrino at Arkansas — finishing with nine career sacks and a Sugar Bowl appearance — Tank decided the NFL wasn’t his calling. He knew that a career helping others succeed was what he wanted, and coaching was the perfect avenue for it.

Tank has wasted little time rising in the coaching ranks. Unlike a lot of coaches who start out at smaller programs, his first job came as the assistant strength and conditioning coach at his alma mater, Arkansas, under Bielema.

His time at Arkansas was probably cut shorter than he would’ve liked. After three bowl seasons at his alma mater, the Razorbacks fell hard in 2017, finishing 4-8. After a tough 48-45 loss to Missouri, Bielema was immediately let go, which led to Tank having to find another job to support his then-girlfriend and child.

Luckily for him, Jim Harbaugh and the Michigan Wolverines came calling with a similar job, and Tank was able to help guide the Wolverines to a Peach Bowl appearance while coaching two first-round draft picks, two third-round draft picks and a fifth-round pick.

With that success, he was able to parlay that into a defensive line coaching job at Army, where Tank realized what football is really about.

“You don’t get the 5-star, 4-star, 3-star recruits over at West Point,” Tank said. “You get coaching, discipline and fundamentally sound athletes. I’ve learned (it’s about) the team. It’s about love, trust and being committed to excellence and following the plan coaches have put in front of you.”

Tank isn’t carrying over military workouts from West Point for his Illini players; instead, along with weight training, he wants a wide-ranging program involving flexibility, mobility, hydration, diet and lean muscle mass. He doesn’t want the weight room to become just “a slaughterhouse.”

But throughout his career, Tank’s passion for helping others has made him think it’s both a gift and a curse.

He’s seen players just go through the motions and not appreciate the help they receive. But at the same time, unfocused, unmotivated athletes keep Tank always wanting more and wanting to see athletes change their habits and attitudes about the weight room.

While Tank enjoyed his time at West Point coaching defensive linemen, he always knew his true passion for football comes from the weight room. It allows him to showcase his leadership skills and have a larger impact on every single football player on the roster instead of just a position group. It’s where he sees athletes grow the most.

When his former boss came calling for him to come down to Champaign and leave Jeff Monken and the Black Knights, Tank couldn’t pass it up.

Tank will be the first one to admit Bielema’s tenure at Arkansas didn’t go according to plan. However, during his phone call with Bielema before accepting the job, he could sense his boss’s hunger to put that era behind him and turn that failure into success.

“I have moved and evolved and went through different changes. That time is a blur,” Tank said. “The reaction on (Bielema’s) face when he brought up the word Arkansas, it hurt him.

“Whatever broke the camel’s back, especially the new experiences he’s been through with Belichick and the New York Giants. He has grown, I have grown, we’ve all made steps to make it different. You should see how much grind he has put in.”