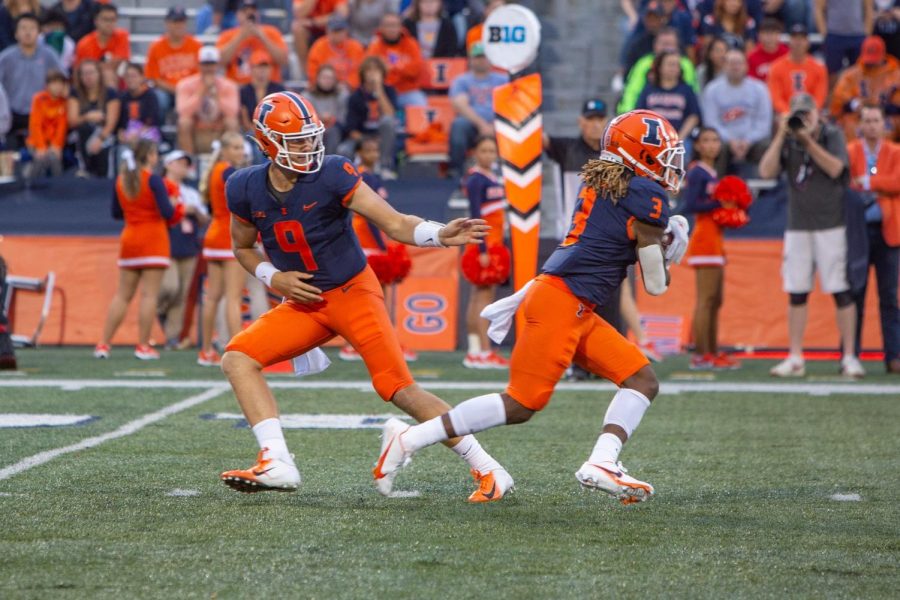 Quarterback Artur Sitkowski hands the ball off to running back Jakari Norwood during the game against UTSA on Sept. 4. With uncertainty at the quarterback position, the Illini will need consistent production from their running backs.

The Illinois football team returned to Champaign this weekend after its second straight loss, this time to the Virginia Cavaliers. Virginia led throughout the entire game, as it never looked back en route to a 42-14 win at Scott Stadium in Charlottesville.

The Illini seemed to be out of answers on offense at several points during the 60 minutes. Artur Sitkowski’s honeymoon phase as the temporary starting quarterback is over. He went 24/45 with 221 yards, a touchdown and an interception. Going into Big Ten play, it will be tough to win any game with a quarterback putting up those stats, so it is imperative that head coach Bret Bielema’s running game comes alive.

For the Illini, there is no shortage of options at the running back position. There have been five different backs who have taken carries during these three games, which will help Illinois as injuries inevitably pile up. Bielema knows that it’s important for the Illini to have a “next man up” mentality this season, and he hopes some of the backups can answer to the call.

“I think offensively, when your number is called — whether you’re a quarterback, running back, wide receiver or lineman — early on, we have to answer those questions quicker,” Bielema said.

Mike Epstein has dealt with a series of injuries during his time with the Illini, but the fifth-year senior came into this year as the number one back on the roster. Against Nebraska, he carried the ball 16 times for 75 yards and even ran into the end zone for an Illini touchdown.

After the game against UTSA, the injury bug bit Epstein once again. According to Bielema, there still isn’t a time table for Epstein’s return, which does not bode well for Illinois’ running game.

Much like Epstein, Reggie Love III has seen his carries per game slowly diminish throughout the early part of this season. Love and Epstein were the primary ball carriers against Nebraska and UTSA, but with Epstein out against Virginia, Love only received one carry. During the upcoming game against Maryland, I expect the St. Louis native to be more involved in Illinois’ offense.

After not featuring against Nebraska in the season opener, Josh McCray has assumed a larger role in the Illinois offense throughout the last two games. He got five carries for 16 yards against UTSA, and then seven carries for 33 yards versus Virginia. Bielema is pleased with McCray’s development early on in the season, and he hopes for the freshman to continue his strong play.

“Josh is a very talented player,” Bielema said. “He obviously brings a little more physicality than anyone on the roster. He comes from the part of the country where he naturally runs the ball very physically. He is a very talented back, and the coaches have recommended him to me.”

Hayden played a minor role throughout two games of the season, putting up four carries for 12 yards against Nebraska and one carry for six yards versus Virginia. With Epstein’s injury, I expect Hayden to receive a few more touches per game.

It has yet to be seen if one of these players will emerge as the primary ball carrier for the Illini, but with the current offensive struggles, Bielema and his staff are looking around the whole offensive depth chart.

“We sat down yesterday and took a look at who our running backs are, who our tight ends are, who our wide receivers are and who our five best offensive linemen,” Bielema said. “And that’s hopefully going to help us as we enter Big Ten play.”