Collegiate golf may look at PGA Tour for guidance 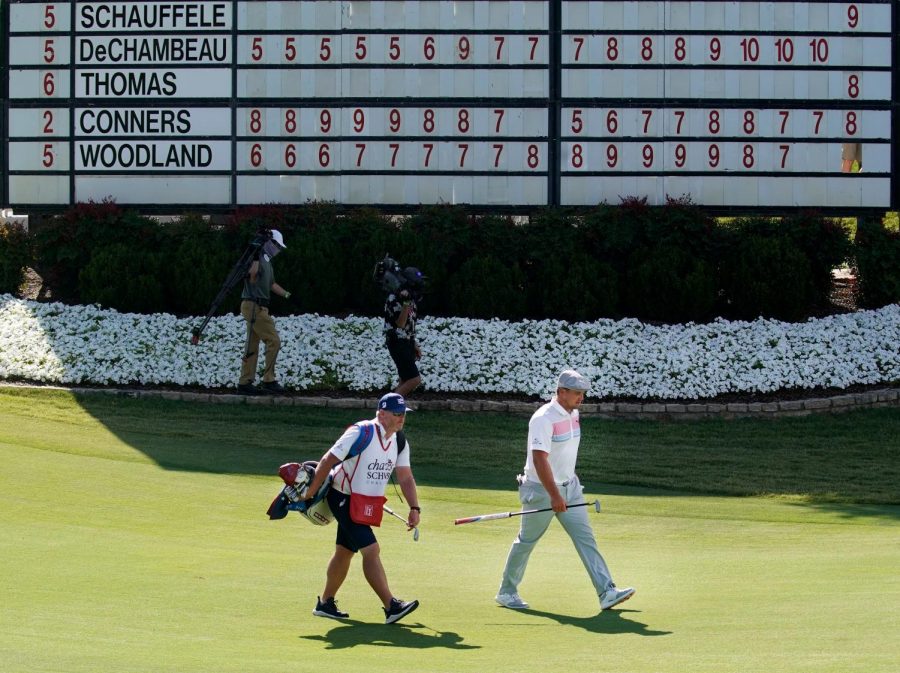 PGA Tour golfer Bryson DeChambeau (right) walks up the 18th fairway past the leaderboard showing him at 10-under during the second round of the Charles Schwab Challenge at the Colonial Country Club in Fort Worth, Friday, June 12, 2020. He finished the day tied for second with Jordan Spieth at 10-under. The Challenge is the first tour event since the COVID-19 pandemic began.

Golf was one of the first sports to come back after the shutdown began to wrap up. The success of the new rules the PGA Tour installed is what will determine what the NCAA will do about college golf next season.

The PGA Tour and its sub tours, like the Korn Ferry Tour, will provide constant testing and safety equipment. They limit golfer interaction with other golfers, caddies, fans and staff at events.

Former Illini and the 2010 individual national champion Scott Langley is a part of the Korn Ferry Tour. Since returning, he has played in both the KF Sawgrass and King and Bear Classic.

“I think the KF Sawgrass was a success, it’s been some adjustments for us all to get used to, but I have a lot of confidence in the plan the Tour has in place and feel very comfortable being at golf tournaments and competing safely,” said Langley. “I had a lot of practice at home already with making certain adjustments when going out and about, so to come out here and be asked to do similar things isn’t that big of a deal.”

He plans on playing in all of their tournaments and he said most guys feel confident in the steps the Tour has taken to reduce the risk as much as possible.

As a former college golfer, he can only imagine what it will look like next year.

“It’s hard to say how these coronavirus adjustments will impact golf. I think it begins with figuring out when students can get back to campus,” said Langley. “Then from there, you can start to think about testing and how to create an environment at college events which promotes safety. I’m sure there will be adjustments guys will have to make as everyone has.”

For the University of Illinois students, the semester will be a hybrid of in-person and online classes.

Coach Small declined to comment on what pro golf has done and what college golf could look like next year in response to the coronavirus. He didn’t want to speculate and wanted more information in relation to the subject.

Back in March, Small wanted to rely on the sports department, university, state and federal government for guidance. There was and still is a lot of unknowns with the virus and the team just wanted to get back to golfing however possible.

Other than the status of golf, he expressed disappointment in how the season ended for the players. They had a below standard fall but responded in an impressive way to start the spring season. The Illini wanted to extend their 12 year Big Ten Championship streak and unfortunately couldn’t.

However, he was excited about next season and, at the time, hopeful the rumors about the NCAA granting spring sport seniors would come to fruition. The rumor became a reality and two of the Illini’s three seniors decided to return for a fifth season. Geovanni Tadiotto and Michael Feagles took up the NCAA at their offer, while Bryan Baumgarten wanted to make his jump to the pros.

“The developments effectively just delay most college guys’ pro careers for a year … An extra year of college golf playing for coach Small is still pretty great! And it will make guys even more prepared when they do turn pro and get into the professional ranks,” said Langley.

As of now, only one professional golfer has tested positive for the virus. PGA Tour player Nick Watney had to withdraw from the second round of the RBC Heritage and had to quarantine for 10 days as required by the new guidelines they instilled before returning.

His contemporaries were a little nervous, but they all understood it can happen to anyone.

This was the second tournament for the PGA Tour; they had no positive results at the Charles Schwab Challenge a couple of weeks ago from June 11-14.