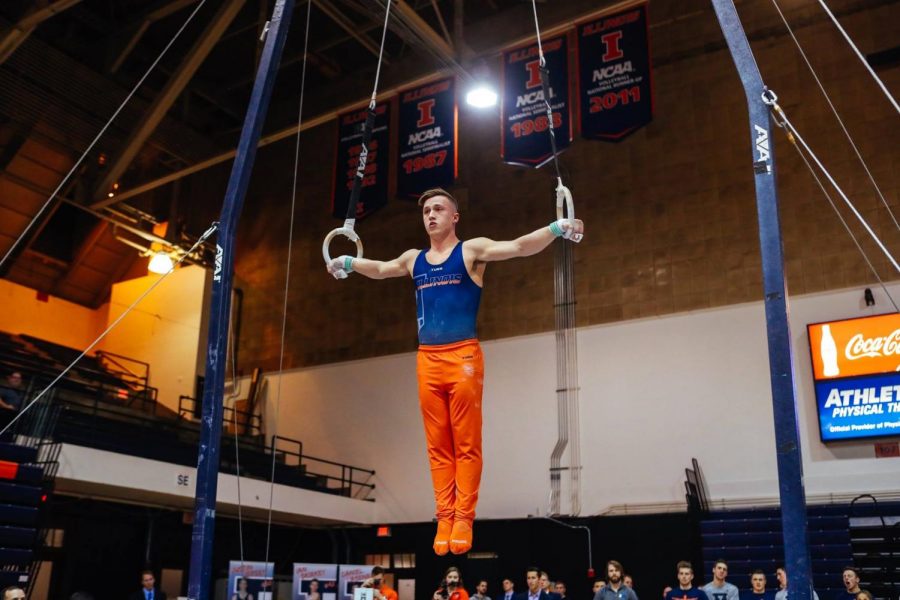 Max Diab performing on the rings at Huff Hall

The Illinois men’s gymnastics team heads to Iowa City, Iowa, this weekend to compete in the Big Ten Championships.

After multiple disappointing weeks, the Illini will attempt to flip their momentum and get back on track. For head coach Justin Spring, success comes down to being consistent.

“We train to be perfect, but as long as we don’t let one mistake get in our head, then we can be champions,” Spring said.

Last year, the Illini won the conference meet and were crowned Big Ten champions and this year they’re hoping for the same outcome.  If the Illini are planning on becoming back-to-back Big Ten champions, they’ll need their national champion gymnast, senior Alex Diab, to step up.  Diab has been consistently dominant and has shown why he’s so valuable. Diab has put up a score of 14 or higher on both the vault and the rings while maintaining superb with his floor routine as well.

The Illini will also have to rely on senior Johnny Jacobson in Iowa.  The All-American is immensely valuable to this team as he competes in multiple events, including the all-around. Jacobson’s success on the parallel bars is immense for this Illini team. Just last week, Jacobson had a fluky performance on the parallel bars and he scored a season-low 10.300; the Illini lost the meet by 2.600 points.  Jacobson would need to have a bounce-back meet for the Illini to be successful.

Another gymnast to watch is junior Michael Paradise. The junior only competes in one event, the pommel horse, but is still invaluable to this team. Paradise is almost guaranteed to score a high-14 on the pommel horse and is a name to watch at this meet and the NCAA Qualifiers in two weeks.

The Illini feel confident in their chances at winning another Big Ten title despite recent struggles. The time off seems to be really helping the team.

“Similar to that gap before we played Stanford, we came off just cruising and our time before Big Tens feels like that,” Spring said.

The Illini will compete in the Big Ten Championships both Friday and Saturday. This will be their last meet before the NCAA Qualifiers at the State Farm Center on April 19.