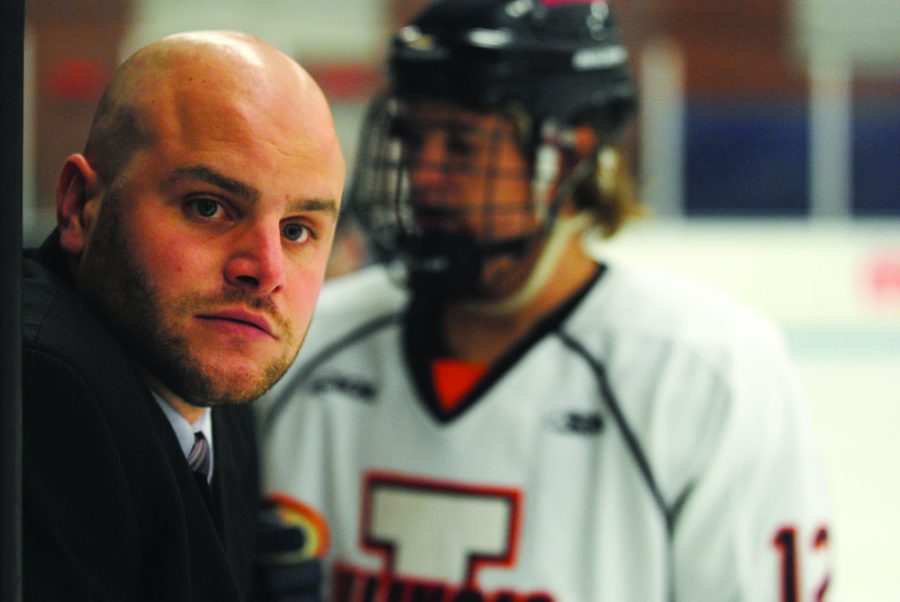 Head coach Nick Fabbrini looks to the referee for an explanation of a penalty call during the game against No. 2 Ohio at the Ice Arena Saturday night, November 3, 2012.

For Illini hockey head coach Nick Fabbrini, there is no place like home, but soon enough he will be 5,791 miles away.

Fabbrini was recently named an assistant coach for the 2019 U.S. Men’s National University Hockey Team. He will help the team during the 2019 Winter World University Games, taking place March 2-12 in Krasnoyarsk, Russia.

“It’s really exciting; it’s definitely an honor to represent your country,” Fabbrini said. “We’re really looking forward to it. For me, the highest level that I’ve coached at to this point, and you’re basically coaching against current and former professional players, so I definitely look to take some things and figure out ways to apply them back to here.”

Debuting in 1960, the games are held every other year (with the exception of 1980) and will host 76 events within 11 different winter sports.

For Fabbrini, receiving an offer to help coach his country is greatly appreciated, but his ideal job remains here in Champaign.

Fabbrini, a decorated Illini hockey player himself, took the head coach job hoping to turn Illinois back into the contender it was when he was on campus, and he is proud of the work that has been done thus far.

“Through the last couple of years, with the help of the coaching staff and, most importantly, the players, we’ve been able to get things back to the way that they were when both (Pierce) my assistant coach and I played here,” Fabbrini said. “Where we’re competing for national championships every year. Where there’s a high level of accountability and expectation.”

The platform of a national hockey team provides all the necessary resources a team needs to be successful. Whether it is travel accommodations, dining, training equipment or high-quality rink use, USA hockey pulls out all the stops it can to help its teams win gold.

That is far from what Illinois hockey has at its disposal. However, Fabbrini is proud of the fact that his team listens to him, even when the program cannot give them all the special amenities.

“That’s something that shines through in the way we play,” Fabbrini said. “Especially the last couple of years, where we’ve certainly had a lot of talent but we don’t necessarily have all of the resources that a lot of the other top programs in our league have. It’s really a testament to our guys, their buy-in and their belief in what we ask them to do.”

While he’s away in Russia, Fabbrini will coach for and against top-level players, many of whom will, are or have been professional hockey players. And even though he is going to be soaking in every moment, Fabbrini’s top priority is still being head coach for the Illini.

“This is my dream job; I love it,” Fabbrini said. “I get to coach at my alma mater and coach guys that, while they’re not gonna be professional hockey players, are gonna be leaders in all different fields.”