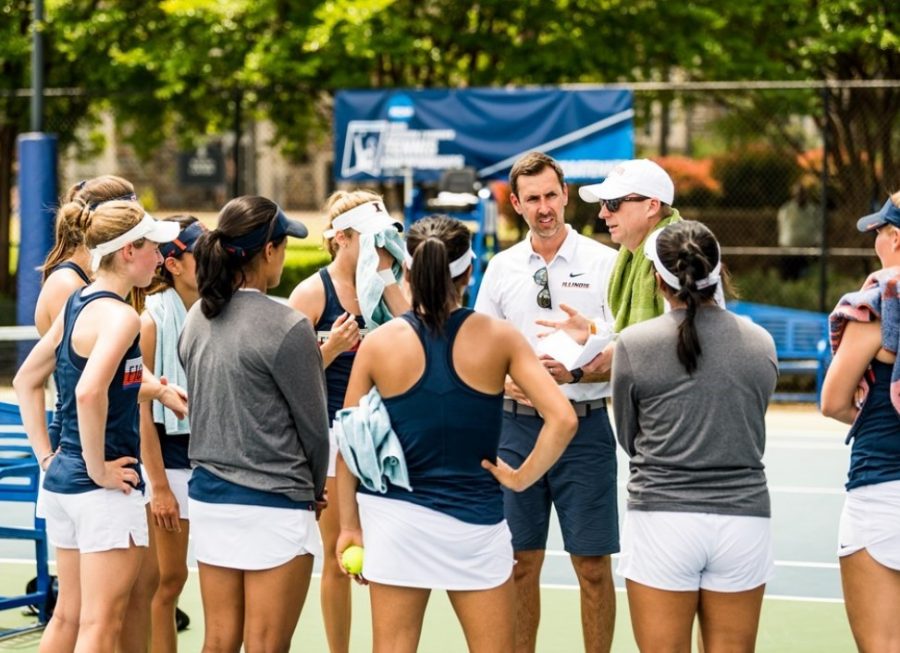 Illinois Women's Tennis Head Coach Evan Clark, wearing a white hat and sunglasses, huddles with his team before matches begin during a meet against Arizona State on May 4, 2019.

On Jan. 26, the Illinois women’s tennis team began its spring season triumphantly at home by winning both matches in a doubleheader against Eastern Michigan and Eastern Illinois.

On the surface, the wins were almost an expectation for Illinois; the team had lost just two home games in their previous couple seasons, and the day’s matches weren’t against top competition, but those two wins carried extra meaning. With the second win of the day over Eastern Illinois, head coach Evan Clark reached 100 career wins.

The impressive milestone was only “just a number” to Clark, but his path to 100 wins almost never happened at all.

For Clark, tennis has been a north star for almost his entire life.

“I started playing tennis when I was 5 (or) 6 years old,” Clark said. “My dad played tennis a ton. He put me out there, and I had my racket in my hand at an early age.”

As a youth tennis player, Clark was incredibly successful. While at Liberty High School in Missouri, Clark placed sixth in the state singles tournament in each of his first three before finally breaking through his senior year and winning the tournament to a tune of a perfect 31-0 record on the season.

Clark went on to play tennis at the University of Missouri-Kansas City on a sizable scholarship for three years before transferring to Arkansas for his senior year. Spending time at a smaller program before transferring into a top-tier tennis school provided Clark with some perspective.

“It was always good to see both sides,” Clark said. “At UMKC, we didn’t have very much money and travel was tough. We didn’t get a lot of stuff. Arkansas was the total opposite, so I saw both ends of the spectrum.”

Perspective remained a common theme for Clark, as his first head coaching job came at UNC Wilmington, a very small tennis program. Clark said Big Ten schools like Illinois have more resources than at his first job, so he’s learned not to take anything for granted.

Despite playing tennis for almost his entire life, Clark planned for a career unrelated to the sport. Clark majored in psychology and minored in political science. He intended to use the degrees to pursue a career in politics. After college, Clark took a deep dive into his field, working for his local congressman and eventually a senator. Although he was quickly able to make inroads towards a career in D.C., he soon realized that politics wasn’t for him.

“When you do something for so long, you take it for granted,” Clark said. “Right out of college, I got out of tennis. Worked on Capitol Hill and got into politics for about a year, and I realized pretty quickly that tennis was really important to me. Tennis wasn’t that bad, so I think it was important for me to have a different perspective and see something else and realize how good I have it playing tennis.”

After all, Clark had unfinished business.

“I felt I didn’t achieve my full potential in college,” Clark said. “I didn’t want kids to have those types of regrets. It’s probably one of the main reasons I’m still in it (coaching) and I enjoy doing it.”

Unfortunately, becoming the head coach of a major tennis program doesn’t happen overnight. Once Clark decided to make the move back to tennis, he began working for USTA, tennis’ governing body. After spending a year at UTSA, Clark got his first big break at a job working as an assistant coach for Penn State.

He was able to leverage that experience into another assistant coaching job at the University of Maryland before eventually landing his first head coaching job at the small but respectable UNC Wilmington. During a brief and successful stint at UNC Wilmington, Clark earned awards such as Colonial Athletic Association Coach of the Year. Clark received the job at an incredibly young age, being just 28 years old.

“I was so young when I got my first head coaching job,” Clark said. “Like any younger coach, I was very hungry and very driven. A go-getter and no one’s going to tell me no. You feel like you know everything at a young age, and you certainly do not.”

After his successes at UNC Wilmington, every experience that had come before finally coalesced into Clark receiving the coaching job at the University of Illinois. Clark has been able to use his breadth of tennis knowledge to inform his style of coaching, allowing him to take a more simple and precise approach.

“If there is an option for me, I’m always going to take the positive route and try to be constructive,” Clark said. “When I’m talking to players, I don’t give them a ton of information. Especially during the heat of the moment during matches, they have a tough time processing stuff. I’m a little bit more of a players’ — a family coach.”

During matches, Clark is often seen on the sideline carefully watching, precisely picking his moments to share advice with his players in the simplest way possible and avoid information overload. When he does talk to a player, he typically uses short words or phrases to focus on a single idea.

“I want to be something consistent in their life. I feel like they have so many inconsistent things in their lives right now,” said Clark. “School, personal life, family, and so much other stuff they’re dealing with right now. My big goal every day is (to provide) something that they know they can show up to practice and say ‘Hey, I know what I’m getting today from coach and it’s this.’ I like to be a consistent, positive force in their life.”

Sometimes, the most difficult tasks have the simplest solutions. When it comes to coaching tennis, Clark may have found that solution as he has seen immense levels of success with his more consistent and technical approach. Clark has already broken the record for Illinois’ best start by starting 19-3 in the 2017-2018 season. He tied the school record for most wins with 22 and broke the record for the highest ITA ranking by being fifth in the rankings for numerous weeks that same year.

Despite all of his past successes, the 2020 spring season ended with Illinois having a record of 5-9, Clark’s first losing record during his time as head coach. To Clark, this season brought likely the most difficult schedule he’d faced at Illinois, but he felt the team was about to turn a corner. The team’s last match was a 4-1 win over Purdue, their first Big Ten opponent.

“We were going to be 1-0 in the Big Ten, and I felt like we could rattle off several in a row,” Clark said.

For Clark, the accomplishments have come naturally as he’s spent his life focusing on a process over immediate results. Despite only being 36, he’s already gotten immense perspective through playing and coaching at small and large schools alike. Although this season was a bit of a down year, if his experience at Illinois is anything like his past, he won’t be down for long.

“Hopefully I have a hundred more [wins] in me or two hundred more in me,” Clark said. “I was happy to do it at Illinois for sure. I think that was a big, big deal for me to have it happen at Illinois — someplace where I feel like I’ve been through a ton and built the program and a place I hope I’ll be for an extended period of time.”