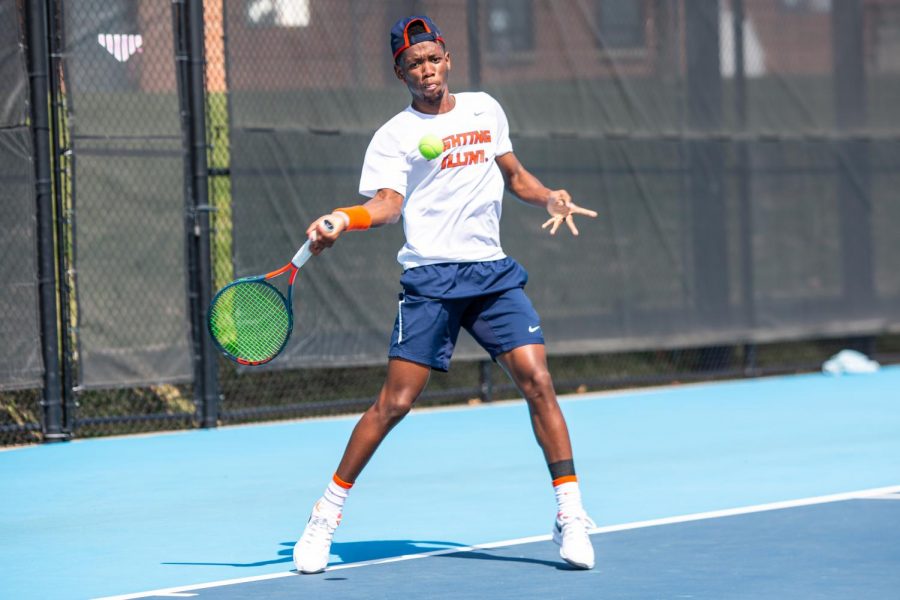 Redshirt sophomore Siphosothando Montsi returns the ball in his singles match against a player from Minnesota on Sunday. The Illinois men’s tennis team defeated both Wisconsin and Minnesota this weekend at Atkins Tennis Center.

Illinois closed out its final weekend matches at Atkins Tennis Center, playing against two familiar faces: Wisconsin and Minnesota. Though the No. 12 Illini took some losses out on the courts both days, they inevitably came out with two team wins.

On Friday, Illinois defeated Wisconsin 6-1 for the third time this season. At first, the doubles point seemed promising to the Illini as all three duos took the early lead.

Wisconsin, however, refused to give in that easily. Its players on court three breezed past Hunter Heck and Noe Khlif 6-2. Alex Bancila and Aleks Kovacevic struggled to break Wisconsin’s serves on court two and dropped their match 6-3. The sole Illini doubles win came from Alex Brown and Zeke Clark. They extended their win streak to nine after a tight 6-4 match.

Though the Badgers had the edge entering singles play, the Illini stunted their momentum and went on to win all six matches. First to finish was Clark, then Kovacevic, who won their matches 6-2, 6-1. Kweisi Kenyatte also finished with dominant straight-sets while Heck clinched Illinois the win with a 7-5, 6-2 close out on court five.

Brown and Khlif played to three sets as they each lost their first one. With both matches filled with long rallies, each side clung on, ripping backhand after backhand. Eventually, Brown and Khlif topped Wisconsin’s loss off 5-7, 6-4, 6-2 and 6-7, 6-3, 10-5, respectively.

On Sunday, Illinois not only beat Minnesota 5-2 but also celebrated its graduating athletes. The team and their families honored the fifth and final year of play for Vuk Budic, Clark, Khlif and Kovacevic.

Unlike the last match, Illinois secured the doubles point with credit to contributions from courts one and two.

In the singles matches, Illinois put four points on the board — three of which came from the seniors.

Budic didn’t play but stayed highly involved in the matches as he consistently offered words of encouragement and coaching to his teammates, especially to Siphosothando Montsi. Montsi grappled with his opponent throughout the two-set match that broke his undefeated season title.

As is, Montsi’s 6-3, 6-4 final score fails to reflect just how close the battle was. He trailed his opponent in the first set, even being down 0-3 at one point, but lessened the lead to 3-5. In the match point play, Montsi delivered a forehand return to Minnesota that was called to be out of bounds. The second set consisted of more or less of the same action. Montsi hastened to take command and took the lead once and tied the score three times before losing multiple deuce points that would ultimately result in his loss.

At the third position, Clark added to his accolades after a 7-5, 6-4 match that cemented his 12-0 record.

Kovacevic sealed the Illini victory in a 6-3, 6-4 straight-set win by way of his typical fashion of play: aggressive baseline returns that are either too forceful to return or near impossible to chase after.

The Illini leave Atkins Tennis Center with a polished 14-2 record and enter the remaining away matches with a 10 win streak. Next week, Illinois will face Iowa at 1 p.m. on Friday and Nebraska at noon on Sunday.