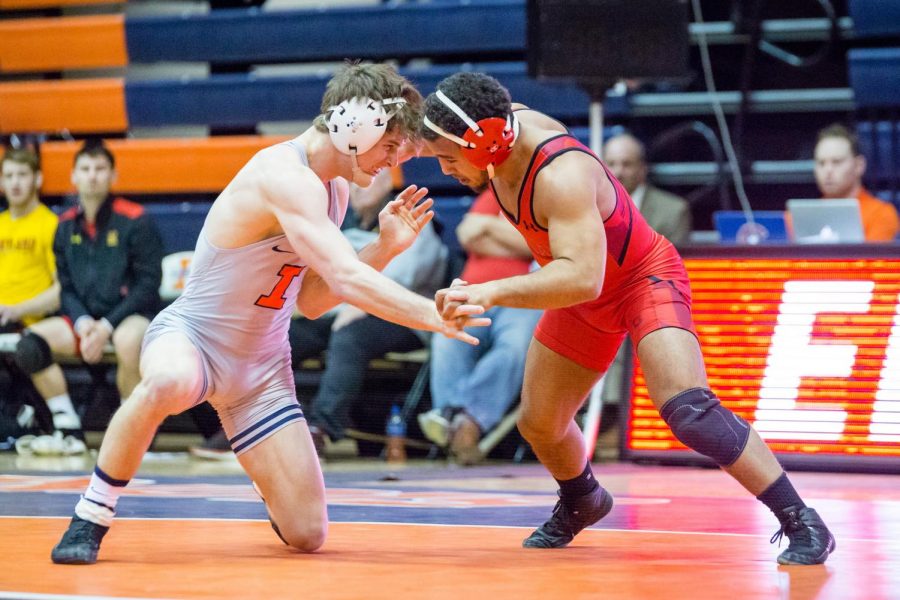 Illinois’ Eric Barone wrestles with Maryland’s Alfred Bannister in the 149-pound weight class during a meet at Huff Hall on Jan. 28. The Illini won 25-18.

The Illini wrestling team traveled to Las Vegas over the weekend to compete in the Cliff Keen Invitational. The last time Illinois competed, the team had a strong showing, with nine wrestlers placing at the Lindenwood Open.

Illinois sent eight wrestlers to the tournament with a wrestler in every weight class except for the 184-pound and 149-pound classes.

In the first round, every Illini wrestler advanced except for 197-pound redshirt-senior Andre Lee. Lee lost his first matchup of the weekend against Oklahoma’s Jake Woodley Norman by a 5-2 decision. For the rest of the tournament, Lee competed in the consolation bracket.

During his first two matchups in the consolation bracket, Lee faced Casey Jumps of Air Force and Chasen Blair of North Carolina. In those matches, Lee outscored his opponents 14-5, showing off his defense.

“For me, it’s always been about being stingy with everything,” Lee said. “Obviously if I give up a takedown, that’s more work for me having to get to a takedown. Same goes for being on the bottom and getting an escape. The way I see it is if I don’t get taken down, that’s half the match. Just have to focus on my offense and getting to my scores.”

Lee’s next matchup was a rematch from the first dual meet of the season against Missouri. When the Tigers came to Illinois’ Grange Grove, Lee lost to Wyatt Koeling in a 2-1 decision due to a penalty.

Even though it was a rematch, Lee didn’t see it as revenge, as he went on to lose on a penalty point.

“In my head, it was just another match or a continuation of the first match,” Lee said.

Posting an impressive weekend, 157-pound redshirt junior Eric Barone took down two ranked opponents. Barone pinned his first opponent, Christian Labrie from Brown, in overtime to move on to the round of 16.

In the round of 16, Barone faced No. 5-ranked Ke-Shawn Hayes from Ohio State, who won by a 2-1 decision.

After losing in the quarter finals, Barone headed to the consolation bracket and faced No. 17-ranked Hunter Willits of Oregon State. Barone beat Willits in a 4-0 decision to finish the day in seventh place.

“I knew going into it that it was my last match,” Barone said. “I had seven more minutes left, and I’m done for the weekend. So I just had to go out there and wrestle as hard as I can for seven minutes.”

Two Illini wrestlers placed sixth in their brackets. Michael Carr, 141-pound redshirt sophomore wrestled all the way until the semifinals, when he faced Jaydin Eierman of Missouri. It was the second time Carr and Eierman had faced off; Eierman won the first time around. In their second encounter, No. 3-ranked Eierman again got the best of Carr by scoring a 5-2 decision.

Head coach Jim Heffernan liked what he saw from junior Travis Piotrowski and 133-pound redshirt-sophomore Dylan Duncan. The Lindenwood Open marked both wrestlers’ first action of the season, and Heffernan was pleased with how they performed.

“Overall, (there were) some positives, but glaring weaknesses in different spots,” Heffernan said. “Some good wins and progress from a couple of guys, but still need more out of a few others.”

Next weekend, the Illini will travel to DeKalb to compete in a dual meet against Northern Illinois. Heffernan said he’ll likely send the same guys that competed in the Cliff Keen Invitational, but he’s focused on addressing the weekend’s successes and failures with the team before thinking about NIU.

“We will worry about the next event Monday,” Heffernan said. “We need to do a lot of things better.”