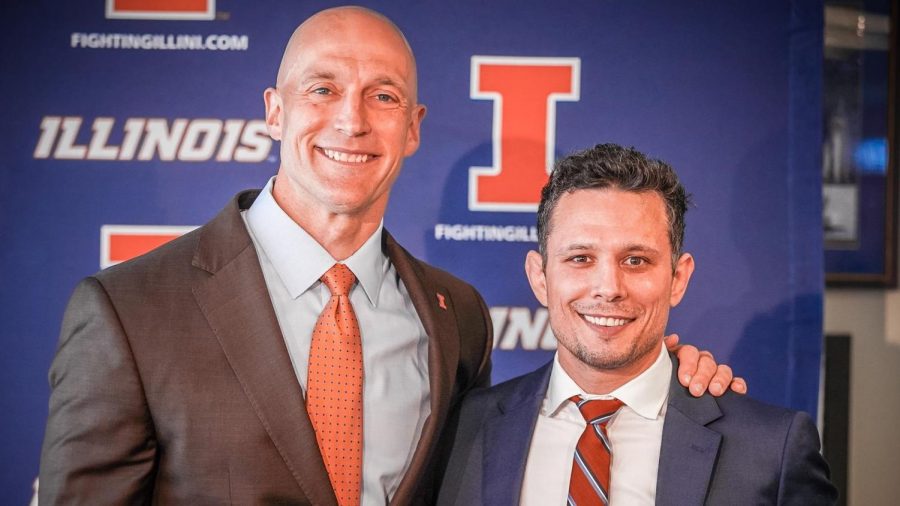 When Mike Poeta was introduced to the Illinois faithful as the new wrestling coach, he knew he had big shoes to fill. However, all early signs are pointing to the fact that Poeta was a fantastic hire for the future of the team.

Poeta recently took over for former head coach Jim Heffernan, who spent a combined 29 years with Illinois wrestling. During his tenure, Heffernan established the Illini as one of the strongest programs in the country, amassing 13 top-10 finishes at the NCAA Championships and coaching 11 national champions.

Heffernan is happy about the hiring of Mike Poeta, as he believes Poeta was a perfect fit for the role.

“I’m so happy for Mike and the program,” Heffernan said. “It’s been fun watching this process come full circle from Mike’s days as an Illini student-athlete, to running a successful club, coming back to campus as an assistant coach and now leading the program.”

Anyone taking over for Heffernan would have to know that to continue this type of success, proper recruiting and training would be paramount. And it is clear Poeta has the track record to back up his hiring, as he has been involved in wrestling his whole life.

The Highwood, Illinois native began his wrestling journey in the early 2000s. During high school, Poeta was rated the No. 1 pound-for-pound recruit in 2004 after he won two Illinois High School Association state championships and three high school national championships.

This impressive high school resume led him to the wrestling program at Illinois, where he was a member of the team from 2004-2008. Poeta went down as one of the most successful wrestlers in Illini history.

He was a vital member of the 2005 Big Ten championship team and gathered a plethora of awards while on the Illinois roster. Poeta was a three-time All-American, two-time Big Ten champion (2008 and 2009) and two-time NCAA finalist. His career record in college was an impressive 105-14, and he ranked second all time in win percentage (.891) and 15th in career wins.

After graduating from Illinois, Poeta spent three years wrestling professionally. He represented the United States at the 2010 World Cup in Russia and competed at the 2012 Olympic Trials.

Poeta stopped wrestling professionally in 2012, and he opened the Poeta Training Center in Lake Forest, Illinois. During his five years as the head coach and owner of the training center, he coached 19 high school and junior high state champions.

Poeta joined the Illinois wrestling coaching staff before the 2017-2018 as an assistant and established himself as one of the top development and recruiting coaches in the nation. Now, in his role as head coach, Poeta wants to continue his great recruiting track record and turn Illinois wrestling into an elite program.

“I have a lot of ideas on how we can get this program to an elite level,” Poeta said. “And the top priority of mine is to keep the Illinois kids, and recruit them and keep them in the state of Illinois.”

Poeta has decades of experience in the world of wrestling. As a wrestler, a coach and at an administrative level, he has displayed excellence and competence over the years. Illinois is lucky to have this type of successor to Jim Heffernan, and there is no doubt Mike Poeta is ready to take Illinois wrestling to new heights.

“Everyone in this sport, in this country and the Big Ten are really competitive, and that includes me,” Poeta said. “It’s going to be fun, and I am excited to get to work.”