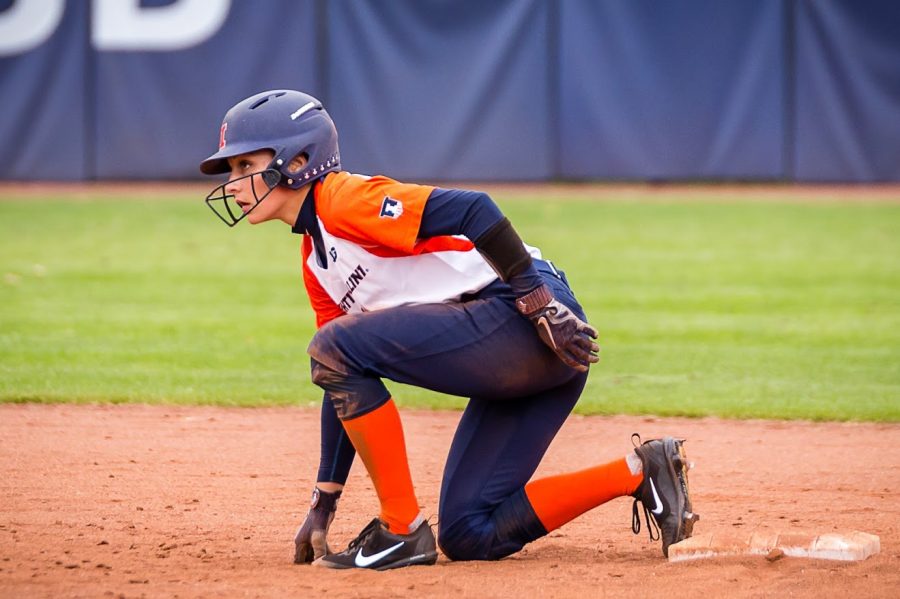 Illinois outfielder Kiana Sherlund (6) gets ready to run to third during the game against the University of Wisconsin-Parkside at Eichelberger Field on Saturday, Sept. 29, 2018. The Illini won 8-0.

The Illinois softball team started its spring season by picking up the program’s 600th and 601st wins in Houston on Friday. During the team’s 2019 season opener, Illinois ousted two top-25 teams — No. 22 Oklahoma State and No. 13 Kentucky — beating them 7-4 and 6-5, respectively.

Senior outfielder Kiana Sherlund got the ball rolling for the Illini in her first at-bat of the season, leading off with a double. She would be knocked home by fellow senior Stephanie Abello, giving Illinois a 1-0 lead in the top of the first.

Senior infielder Annie Fleming also knocked one over the fence to extend the Illini’s lead in the fourth. On the mound, senior pitcher Emily Oestreich earned her first win of the season, but it was the performance on the mound from freshman Sydney Sickels that sealed the deal. Entering in the fifth, Sickels threw two hitless, scoreless innings to keep the Cowgirls at four runs.

Sickels would again take the mound later that day against Kentucky, earning her first collegiate start and win. The freshman held Kentucky to four earned runs while striking out six batters in eight innings.

Head coach Tyra Perry expected nothing but a level-headed performance from the newcomer.

“Sydney doesn’t need to be handled,” Perry said. “She handles herself, which is great; it’s why we love her so much. She’s just a competitor.”

On Saturday, Illinois’ first matchup would be a familiar foe: Oklahoma State. However, the start of Saturday’s game could not have been more different than the teams’ Friday meeting.

The Illini failed to answer the Cowgirls’ one run in the first, and the Cowgirls piled on from there, eventually ahead 9-1 by the fourth. Illinois battled back in the fifth and sixth, closing the gap to 10-6 with runs from senior Stephanie Abello, Bella Loya and Annie Fleming, but a scoreless seventh inning from both teams brought Illinois’ first loss of the season.

“We didn’t show up exactly as sharp as we needed to,” Perry said. “It’s really hard to beat a good team once, but definitely difficult to beat them twice. With not having the ability to slow Oklahoma State’s scoring down, I think that really hurt us because we did score six runs against them. That’s quite a few runs, but you have to stop them from scoring as well.”

Saturday night brought Illinois a win against the University of Houston, the tournament’s host team. Houston was held scoreless until the fifth when they answered Illinois’ offense to tie the game 2-2. Neither team would score until the seventh, when sophomores Rhein Trochim and Katie Wingerter both scored to give the Illini a 4-2 lead and an eventual win.

Oestreich earned her second win on the season, but the task of holding off Houston fell to Sickels, who threw a hitless inning.

“It’s a good one-two punch between the two of them,” Perry said. “Having both of them has been great because we can use them interchangeably.”

Illinois left Houston with a winning record, despite a second loss on Sunday to Sam Houston State, 6-10.

This weekend, Illinois will travel to the ACC-Big Ten Challenge in Atlanta. The squad will face off against Georgia Tech and Boston College across the weekend.