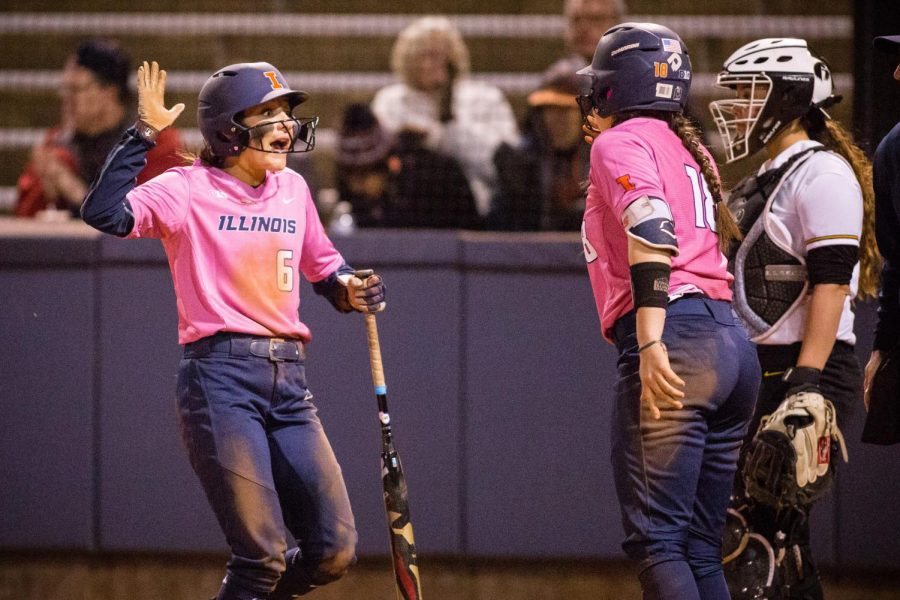 Illinois outfielder Kiana Sherlund (left) celebrates with catcher Bella Loya (right) after scoring a run in the bottom of the seventh to make the score 5-5 against Iowa at Eichelberger Field on April 21. The Illini won 6-5. Sherlund and Loya are excited to start the new season and build on their skills.

Following a 3-2 start to the season, the Illinois softball team heads to Atlanta this weekend where it will face Georgia Tech and Boston College. Fourth-year coach Tyra Perry will look to build off a solid opening weekend and climb the conference rankings.

The team finished 37-18 last season, including a 15-2 home record. Despite the solid record, it was only good enough for sixth place in the Big Ten conference.

“We started out really slow, our first tournament was pretty rough. But our players got back on the grind … they had a new focus,” Perry said.

With a 11-9 road record last season, Perry emphasized the importance of having the right mindset in order to pull out those tough away games.

“We turn each field into our home field. We act as if it’s an auxiliary version of Eichelberger Field and also have the mentality that grass is grass and dirt is dirt,” Perry said.

After leading the Big Ten in a myriad of statistics like batting average, hits and scoring last year, the Illini brings back nine seniors, including center fielder Kiana Sherlund, who led the team in these same categories.

Even with her recent success, the start of a new season is still unnerving for the senior.

“One of our freshman said to me, ‘Man, I’m so nervous for this weekend.’ She said that to me as if I was supposed to tell her not to be nervous,  but I looked at her and said, ‘I’m nervous too!’” Sherlund said.

Nonetheless, the senior picked up right where she left off during the team’s first tournament with seven hits and four runs, tied for first and second on the team respectively.

Although the Illini possess a lot of veteran talent, the team is introducing 10 newcomers this year, eight freshmen and two transfer students. Even though there are more newcomers than seniors, the older members on the team, like Sherlund, have become a model on how to mold their skills, both as a player and a leader.

“It’s unreal the amount of growth we’ve seen out of Kiana,” Perry said. “When she first got here, she was a little nervous and shaky, but now she’s a strong, confident leader. It takes strong leadership skills to play center field and equally as tough to be the lead-off batter on offense, and Kiana is both of those for us. She’s able to help our young players out.”

The culture Perry has created allows the older players to keep the team in check when things start to get sloppy. For coach Perry, she couldn’t be happier that her players take charge.

“We have so many vets on our team that I know I can talk to them directly and tell them, ‘Hey, we need to pick this up,’ Perry said. Having that leadership and minds that want to hear the truth and can handle the truth and turn it into something great is going to be the difference for us this year.”

“The seniors running the team is the best case scenario, and we have that. There are times that I have to step in, but most often I don’t.”

Beyond helping the young players get acclimated on the field, the seniors help out with a lot of the little things off the field. The team will give tips on where classes are, where the best food is and all the local hotspots to help the newbies feel more at home.

Over the weekend, it didn’t take long for the young players to make their presence known. Sophomores Rhein Trochim and Bella Loya both had five hits in their first tournament and tied for the fourth most hits over the weekend.

Loya is off to an especially great start as she leads the team in home runs and runs batted in no other player on the team has more than one home run. Although the long season has only recently begun, Loya and the other newcomers’ early return on investment is a promising sign for the future of the team.

“We love each other; we’re family,” Sherlund said. “That’s going to be huge for us and our team chemistry. We’re a smart team and have always been talented, but what sets this team apart is the resiliency we have. This team is so mentally strong, and the way we’re going to bounce back from (adversity) is something I’m excited to show off.”

With such a tight bond and an arsenal of offensive weapons already established, it’ll be important to watch how the new players continue to develop as the season progresses.

With the first tournament in the books, the next challenge begins Friday against Georgia Tech at 3 p.m.