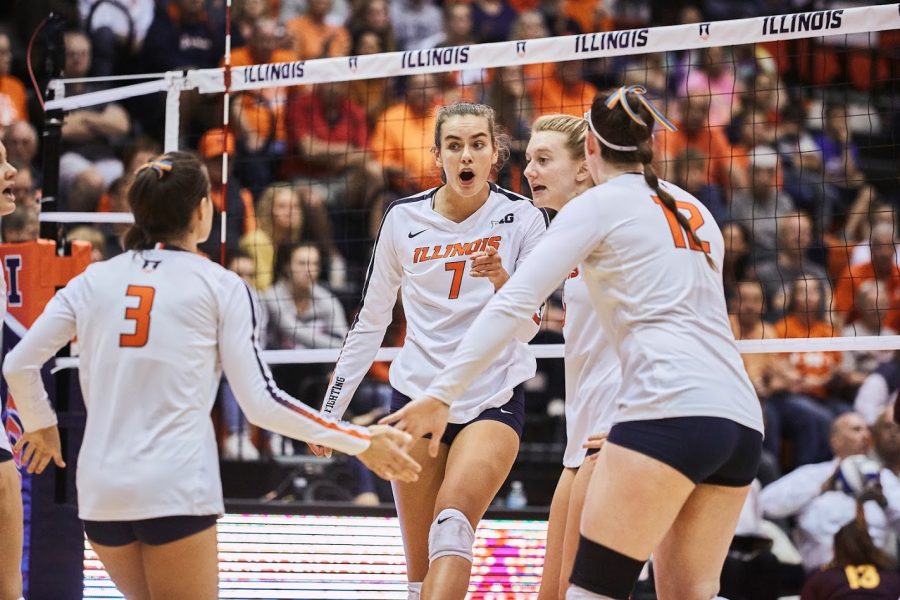 Jacqueline Quade celebrates with the Illini Volleyball team after scoring a point at Huff Hall vs Minnesota on Oct. 9. Illinois lost to Penn State on Wednesday, 3-2.

The No. 17 Illinois volleyball team lost to No. 8 Penn State in five sets after being up 2-0 to cap off a three-match losing streak against the three top teams in the Big Ten.

The last time the Illinois volleyball team played Penn State was last season when the Illini won a five-set match to win their ninth match in a row.

The Illini are now 9-9 on the season and 4-5 in the Big Ten with 11 matches to go in the regular season.

The Illini started strong in the first two sets, playing good defense against Penn State’s attacks. In the first set, the team totaled two blocks and held Penn State to 12 kills on a .188 hitting percentage, winning the set 25-18.

The second set was closer, as Penn State was able to defend Illinois a little better. Illinois’ hitting percentage dropped from .355 to .227 in the second set, and Penn State’s offense elevated their hitting percentage to .244. The Illini were still able to pull out the match in extra points 26-24, with the set winning kill coming off the hands of senior Jacqueline Quade.

Senior middle blocker Ashlyn Fleming discussed how the Illini defense has gotten better over the course of the season.

“Come in every day and work,” Fleming said. “I think we really just focus on that skill, and I think with all of our coaching staff, they’ve really kind of shared the importance of that aspect with all of us. I think we’ve taken on that challenge in wanting to get better, and honestly, anything can get better, so we just have to keep working at that and get that higher than it is right now.”

After the second set, Illinois was a single set away from upsetting Penn State at home and capping off an unsuccessful weekend with a bright spot. But, Penn State was too much to handle. The Nittany Lions got out to an early 13-3 lead. Six of those points coming from errors on the Illini’s end. Penn State continued its good play and won the set 25-15.

In the fourth set, Penn State got out to another early lead and was winning 12-7 midway through the set. The Illini were able to fight back in the set, forcing a back and forth with the Illini’s last lead coming at a score of 28-27. However, the Illini lost the lead, losing the set 30-28.

The fifth set was another back and forth set ending in a two-point loss for the Illini, 15-13.

“I think they made a lot of good changes on their offensive side,” Quade said. “And just kind of gave different looks to their hitters, and credit to them because they are a very physical team, and I think they really capitalized on that later on in the match.”

The next time the Illini are in action will be back at Huff Hall on Saturday against Ohio State (11-10, 4-5).