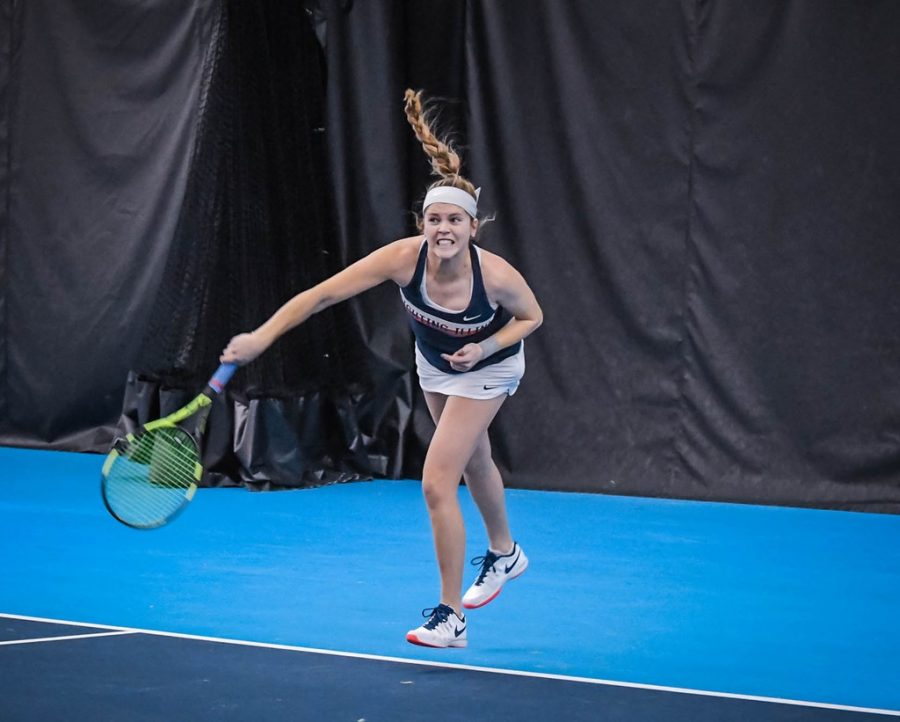 Junior Jaclyn Switkes serves the ball during the match against Furman on Feb. 10, 2018.

During the near half-century since the inception of the Illinois women’s tennis program, the team regularly achieved good but not great results, mostly turning in seasons of slightly over .500 play. However, during the 2017-2018 season, the team showed they could be something more. They caught lightning in a bottle and were able to ride early momentum to a 22-6 record, the best winning percentage in team history.

The previous season, the team had only gone a meager 14-13, so such a sudden and vast improvement came as a large surprise to much of the team.

“I had no idea we were going to go 22-6,” said graduate student Jaclyn Switkes, who was a junior on the team at the time. “With the schedule that I saw, we could have gone 6-22. There was no (early) indicator that we were going to have that success; it just kind of happened.”

The improvement, however, wasn’t without cause. Head coach Evan Clark was entering his third year as the team’s head coach, meaning he finally had a couple of years of experience coaching at Illinois to mentor players through his own vision.

The team also had undergone significant roster changes, with four seniors graduating after the 2016-2017 season, and the quartet of Sasha Belaya, Mia Rabinowitz, Emilee Duong and Asuka Kawai taking their place.

Those seniors had taken up most of the playing time at the number one, two and three spots in singles, so there was immediate room and playing time for players that could step up.

“It was a very competitive group,” Switkes said. “Everyone was fighting for a spot in the lineup to play. We had to prove ourselves in order to play, and that’s what kept everyone motivated.”

Half of the team graduating left a void in internal leadership, which upperclassmen on the team were expected to fill. According to Switkes, that meant leading by example for her and junior Daniela Pedraza Novak. Within the team, the seniors Grace Tapak and Jade Hilton stepped up as the team’s more vocal leaders.

Although the team created an exceptional infrastructure to support their less experienced freshmen, it almost seemed like the freshmen didn’t need any help at all adjusting to the college level, as the team started their season strong with a 4-1 win against Florida State at home.

To Switkes, that win was the moment she began to understand just how great her freshmen teammates were.

“I remember talking to the other junior at the time, Dani, and we were just like, ‘What do we think? Do we have any predictions?’ We know some of the freshmen are good, but we know some are young and need to mature on the court and need to have experience, so we had no idea,” Switkes said. “I think (of) that first match we played against Florida State, our first match at home that season. They were a good team, so that was the true test. We kind of destroyed them, so that gave us confidence for the rest of the season. Before that, we didn’t have any indication of what was going to happen.”

Although the Illini were able to leverage their hot hands to a 3-0 start, being undefeated wouldn’t last very long. Illinois was handed its first loss of the season in almost embarrassing fashion at ITA Kick-Off Weekend, losing to No. 5 North Carolina.

After the match, the team was steaming. It was the first college loss for the four freshmen. who “didn’t know how to lose yet,” according to Switkes. That frustration energized the team to right the ship the next week against No. 11 ranked Texas.

The team did just that, winning 4-2 at home in what Clark has often called his first “signature win” as head coach. If the team’s initial win against Florida State proved the freshmen’s potential to their teammates, their win against then-No. 11 ranked Texas was proof to the world that Illinois tennis would be a force to be reckoned with that year.

The impact of the win over Texas can’t be overstated, as it kicked off a seven-match win streak. The streak wasn’t without challenges, as their next hurdle came a few matches later against No. 22 Washington.

The match was neck and neck from start to finish, with both teams trading blows until the score was tied at 3-3, and only one singles match remained: Switkes versus Vanessa Wong, the 36th ranked singles player in the country. Switkes took the first set while Wong countered by taking the second, but with the third set of their barn burner of a match tied at 5-all, Switkes went down with a cramp.

“I fell to the ground in the middle of the court because I was in so much pain,” Switkes said. “I didn’t know if I could finish the match because I was obviously injured. I took a medical time out and finally somehow won. I don’t even know how I won, to this day. After that, the team rushed the court, and it was just a crazy feeling. We knew that we made history that day.”

Historical is an apt term to describe that win, as the following week, Illinois was ranked as the No. 5 team in the country, the highest ranking in program history. With the whole team on cloud nine due to the ranking, the team headed into the Blue Gray Classic determined to prove that their ranking wasn’t an accident.

While the tennis team has the opportunity to qualify for and play in a handful of tournaments each year, the Blue Gray Classic is especially grueling because it requires teams to play three matches in two days if they are to win. Illinois came out on top in the end, but it took everything to get there.

Initially, Illinois found success in early wins over Yale and Auburn, but their final match against Wake Forest was especially challenging. The team dug themselves into a 3-1 deficit before they could find their footing.

“We lost the doubles point pretty badly,” Switkes said. “We lost five out of six first sets in singles. If you tell anyone that you lose the doubles point and you lose five out of first sets, (they would say), ‘No way you win this match. No way.’ We defied the odds, and we came back. Almost every match was a three-setter, which is unbelievable having it be our third match in two days. It was an amazing feeling knowing that we belong. We’re number five in the nation, and we belong here.”

The team’s victory marked the first time women’s tennis had ever won the Blue-Gray Classic, and it marked potentially an all-time high for the program. They were 10-1, the best start the team had had in decades, and their tournament victory solidified that they were one of the best teams in the nation.

Every team eventually reaches its peak. Unfortunately for Illinois, the 10-1 start was it. The team went a solid 11-5 the rest of the way, struggling primarily against highly ranked opponents whom the team had initially found success against.

The team began conference play with a 4-3 loss against No. 14 Northwestern, the team’s first loss in over a month. Although the team had momentum from their win streak, they were still physically and mentally exhausted from the previous weekend’s matches, bringing their seven-match win streak to an unfortunate end.

The team picked themselves back up, however, and went on to win their next six matches, playing the majority against Big Ten opponents. They won every match by a large margin, letting up no more than one point in any match.

The winning streak was shattered by a 4-0 loss against No. 24 Michigan in Ann Arbor. Michigan was one of the best teams in the Big Ten that year, and its Varsity Tennis Center provided an incredibly difficult environment to play in.

As the trend had been all season, Illinois quickly bounded back, reeling off three victories against Big Ten opponents before losing a tight match to Ohio State.

“The team meeting afterward was disappointing because now, we’d lost to Northwestern, Michigan and Ohio State,” Switkes said. “Those are the three that we want to get up for and ultimately beat at least one of during the season. At that point, we knew that we’d lost to all three even during this ‘historic’ season. It was disappointing that we didn’t get that done.”

The team took care of business with a win at Penn State the next week. With that, the Illini had a chance to reassert their dominance in the Big Ten tournament, but as they had in previous weeks, they struggled against ranked teams.

They started the tournament strong, with a 4-0 win over Nebraska but ultimately lost against Michigan for the second time of the season. The team played a much closer match, with a final score of 4-3, but the loss was heartbreaking for the team.

The one bright side was that Illinois would get to play in its first NCAA tournament in years. They faced off against a tough Princeton team first and came up ahead 4-3 but fell in the next match against No. 11 Texas Tech in a loss that ended their season.

Winning a match in the NCAA tournament was huge for the team, putting them into elite company among all-time Illinois teams.

Although Illinois’ best season of the 21st century ended with an unfortunate loss, it proved to be full of historical highs. Despite having an incredibly young and raw roster, the team brought grit and energy every match, never losing two in a row and tying the team record for wins.

The four talented freshmen that helped spark Illinois’ magical season will be seniors next year, providing both a connection to the past and a ray of hope that Illinois can recapture what made the 2017-2018 season so special in the future to see that success once again.