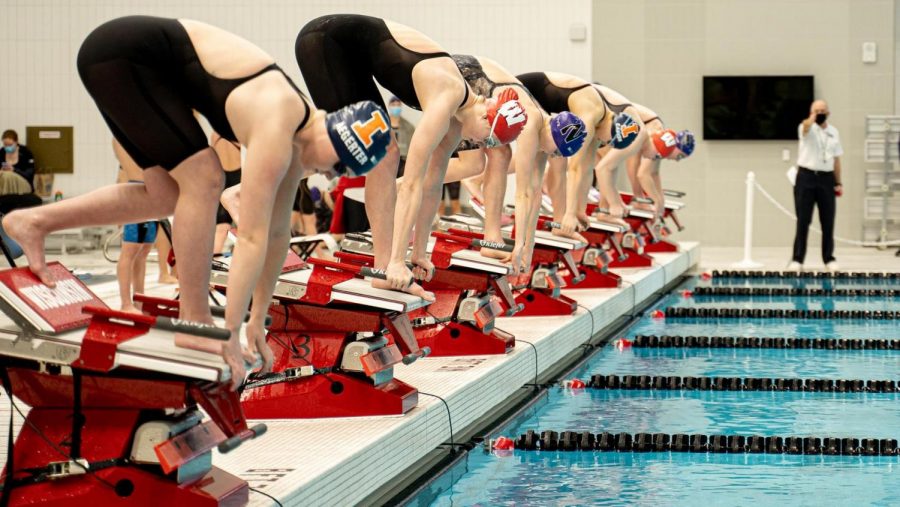 Sophomore Hannah Aegerter and Junior Abigail Cabush prepare to dive from their blocks during the a double dual meet against Wisconsin and Northwestern on Saturday.

The Illini Women’s Swim and Dive’s record currently stands at 1-3 after losing their dual meet against Wisconsin, 57-243, and Northwestern, 49-251.

The team traveled to Madison, Wisconsin, after a week break from their previous meet to face off against these Big Ten heavyweights. The competition took place on February 6 at the Soderholm Family Aquatic Center.

Head coach Sue Novitsky acknowledged her team faced some tough Big Ten conference competition but praised them for the improvements she has been witnessing from them.

“You can tell that they were very nervous for the first relay,” Novitsky said. “They got out there and were a little bit timid during that relay as they were trying to feel it out. Sidney Kennedy in the next event, the 1000 freestyle, had her college best time and really got the team excited. I had to calm them down, so they knew they could step up, compete, and race against two talented teams. It was a lot of people putting together those little pieces of the puzzle that we’ve been trying to work on in practice.”

There were six other Illini swimmers that achieved career bests during this meet, like junior Abigail Cabush, who went on to break the school’s 200 freestyle record with her time of 1:47.90, which was previously set by Barbie Viney in 2007 with a time of 1:47.96.

Another junior, Kaylee Heimes also finished with a new personal best in the 100 butterfly with a time of 57.54.

“They’re gaining the belief in themselves that we work just as hard as these people do so we can step up and compete,” Novitsky said. “Once they settled down and relaxed a bit, it was game on … It wasn’t about winning the event. It was about seeing the improvements that a lot of their other teammates were having.

Freshmen Lauren Beard and Meghan Niziolek rounded out the younger group of swimmers that placed new bests at the meet when Beard set a new record in the 500 freestyle with a time of 5:11.88 and Niziolek in the 100 backstroke with a time of 59.56.

Novitsky mentioned how excited it is to watch the swimmers on the team start to have belief in their abilities, especially the freshmen for the amount of energy they bring to the team when they go out and compete.

“There was a lot of the of the little details that we’ve been working on, reenforcing in practice, and trying to hammer in, and we are starting to see those little things show up in races, naturally, without having to overthink the race … It’s that full team effort and belief coming together as a team that the hard work they are doing in the weight room and in the pool is paying off, it makes sense, and the pieces are falling into place,” Novitsky said.

This loss was the Illini’s last regular-season competition for the season before heading to Minneapolis, Minnesota for the 2021 Big Ten Championships.

The Illini has a little more than a week to rest and recover before their playoff competition, but having time to practice with each other is something that will help the team stay motivated for the Championships, according to sophomore Athena Salafatinos.

“I feel like everyone’s attitudes are really good even with everything that is happening, and I feel like everyone is really pumped up for Big Ten’s and competing because this year was so up in the air,” Salafatinos said. “We didn’t know if we were going to compete or not, so I think having these meets, seeing each other at practice, and seeing each other compete at these meets has definitely kept our spirits high and has kept us motivated at practice.”