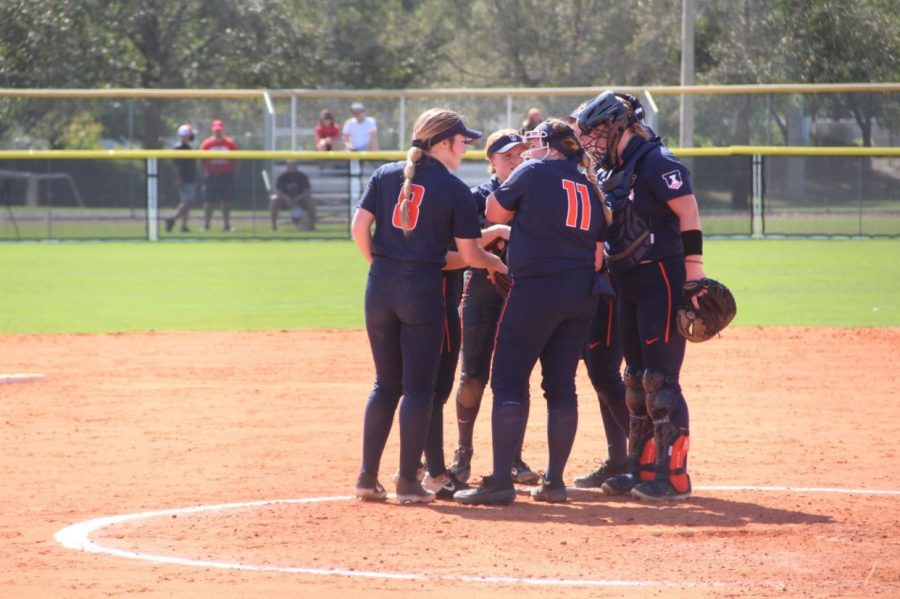 Members of the Illinois softball team gather at the mound to talk strategy during competition. The team won out in both games against Rutgers during a double-header on Friday.

The Illini finished 2020 out on a high note, shutting down a ranked Missouri Tigers squad with pitching and timely hitting. The world has rapidly changed and adapted since the shutdown, and the Illini did, too.

Behind rock-solid pitching and timely hitting, the Illini coasted over the Rutgers Scarlet Knights in a double-header, sweeping the New Jersey state school to start the season 2-0.

“I think the energy was great,” said head coach Tyra Perry. “We are almost a complete year without a game. Something inside of us said it was time to go time.”

Pitching laid the foundation for Illinois’ success last season, and head coach Tyra Perry will probably be able to rely on it some more this season.

Perry elected to give junior Sidney Sickels the opening day start, and the Iowa native didn’t disappoint. Behind her 5-foot-11 frame, Sickels shut down Rutgers, surrounding only four hits while striking out 10 batters.

But Sickels performance isn’t a surprise: the offensive production was. After struggling to keep up with pitching last season, Perry put an emphasis on her lineups playing smart and taking advantage of opportunities. Even though the Illini struggled at times — leaving eight on base — Avrey Steiner did the best she could to offset that.

Going 3-3 with a walk and three total runs scored, Steiner led the way for the Illini, as she was able to spark the Illini offense early.

“You can’t talk about offense without Avrey Steiner,” Perry said. “She did a great job setting the table.”

By the second inning, the Illini jumped out to a 2-0 lead after Steiner RBI single, and the Illini were able to push it up to 4-0 after the fourth inning, providing more than enough insurance for Sickels.

Up 6-0 in the last frame, Rutgers was able to get to Sickels and score a run to avoid the shut-out. But Sickels came back and struck out the side, securing a 6-1 victory and her 19th career complete game.

Less than an hour later, the two squads met back on the diamond, but the rematch didn’t fare well for the Scarlet Knights.

The Illini roughed up Rutgers pitcher Izzy Berouty immediately, hanging four runs on the board after the first frame, capped off by a Kelly Ryono double that knocked in three runs.

Provided a big lead after just one inning, junior Addy Jarvis pitched to contact while still only allowing two hits in five innings.

“Something I love to see,” Perry said about her pitchers avoiding walks. “They came in throwing strikes. They did the same thing in the second game.”

After Berouty settled down, shutting out the Illini in her final three innings, the Illini lineup came alive in the sixth inning, with Steiner knocking in Rhein Trochim for another RBI. Steiner finished the double-header batting 6-7 with 3 RBIs.

The Illini extended the lead to 8-0 after Kailee Powell homered to center field, and freshman pitcher Tori McQueen closed out the Scarlet Knights in four at-bats, helping the Illini walk away with an 8-0 victory.

After struggling at the plate last season, the Illini came out aggressive and productive. While Steiner stole the show, the offensive attack was well-balanced, as the Illini outscored Rutgers 14-1 while recording over 22 hits.

“We did our job well today,” Perry said. “(We) got bunts down and ran the bases really well. We had timely hits that broke the game open.”

Next up for the Illini is a double-header with the Maryland Terrapins, who play Minnesota Friday.