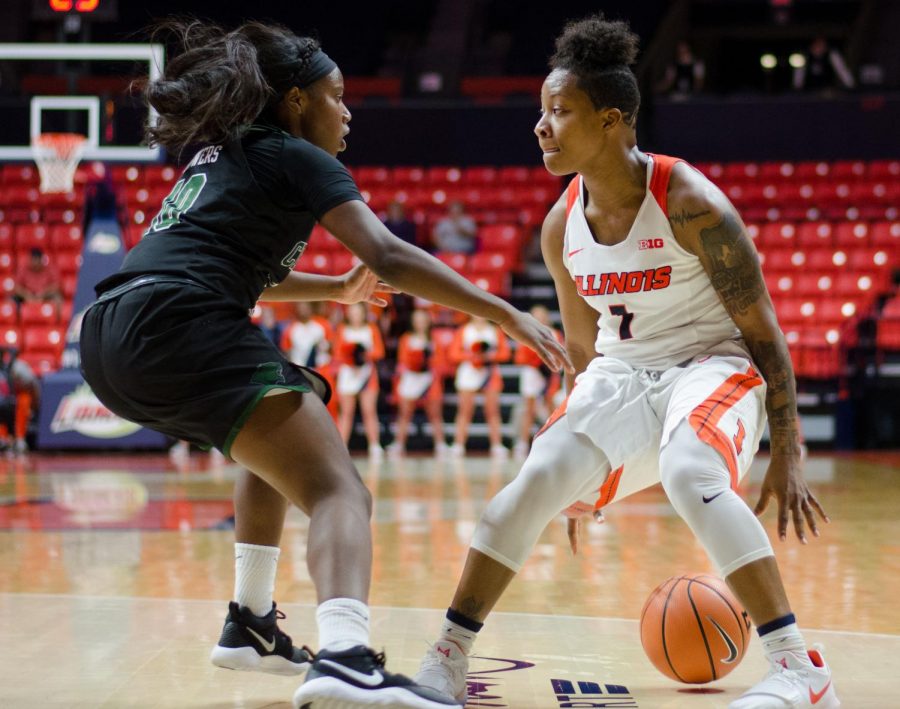 As 2017 winds down, Illinois women’s basketball sits at 8-4, with a home matchup against Austin Peay on Saturday before Big Ten Conference play begins. Head coach Nancy Fahey’s debut season has had a few tough nights, but has overall been bright enough for Illini fans to expect good things going forward.

Going into this season, the Illini had some talent returning, but every player was going to have an opportunity to prove themselves and playing time was going to be earned.

Early on, it was clear that Fahey’s players enjoyed learning under her and that they liked the way she runs the program. Brandi Beasley saw great things ahead with Fahey at the helm.

“She’s a great person and great coach,” Beasley said. “I’m enjoying the time that we’ve had so far and I really look forward to the future under her.”

The 2017-18 campaign tipped off with a victory over Fort Wayne, and junior forward Alex Wittinger and sophomore guard Beasley set the tone for the games ahead as they combined for 25 points in a 64-50 win. Another notable contribution came from senior Akron transfer forward Alli Ball who had 13 points and seven rebounds.

Fahey has stressed that effort in practice will be rewarded with playing time, and Ball’s season-opening extended run of minutes was a sign of that. While she said her play has not quite reached those heights in the games since, Ball certainly caught Fahey’s attention against Fort Wayne.

“I knew (Ali) was a shooter, but what I really did notice (was) her ability to rebound,” Fahey said.

“I walked down to the bench and said, ‘That’s how you get my attention.’”

Illinois then traveled for its first matchup away from the State Farm Center, as it went to Fort Myers, Florida, to take on Florida Gulf Coast. The Eagles, the 2017 Atlantic Sun champions, avenged last season’s loss in Champaign, as they defeated the Illini 85-61, despite 20 points and nine rebounds from Wittinger.

Illinois returned home and fought for two victories that came closer than expected. Sophomore guard Petra Holesinska would tallied a double-double with 11 points and 10 rebounds, an early sign of things to come and yet another example of Fahey’s changing rotations.

Illinois would suffer a setback the next time out, as it was defeated by Western Illinois at the State Farm Center. Wittinger was again impressive in another defeat.

The Illini sported a 3-2 record as they arrived in Albuquerque for the New Mexico Thanksgiving Tournament.

Illinois opened with a 65-59 victory against UC Irvine, with Beasley and Wittinger again shouldering the offensive load. The next matchup, this one with Wichita State, would see a breakout performance from sophomore forward Ali Andrews, who totaled 26 points, including the game-winning free throws in a 68-67 win.

Illinois was simply overmatched in the final, as it suffered a 97-68 defeat to a currently undefeated New Mexico team. Holesinska did not appear in the tournament, as she was nursing a concussion.

As the team returned home, an even steeper disappointment would greet Illinois as Virginia Tech comfortably handled them 96-49 in the ACC-Big Ten Challenge. Although it hurt in the moment, Fahey vowed to do everything she could to prevent it from happening again.

“You (can) get a negative losing attitude when this happens and you let it just drain into the next game and the next game,” Fahey said. “I refuse to let my team do that, and I think the kids in the locker room feel the same way.”

Fahey’s team responded accordingly, as Holesinska returned with 12 points to compliment another Wittinger double-double, and Illinois rode a 22-3 scoring advantage in the fourth quarter to defeat Memphis 63-47 in a true-road atmosphere.

Fahey loved her team’s response, knowing that the Virginia Tech performance could have snowballed into more defeats.

“This was a big game for us emotionally and mentally,” Fahey said. “I was really proud that we had that bounce-back attitude.”

Illinois returned home and handled Indiana State easily, as Holesinska put up 16 points, including four  3-point shots. With the game out of reach, Fahey inserted freshman wing Addaya Moore into the game, who preceded to put up 10 points in the fourth quarter alone.

Although her performances were continuing to stand out, Wittinger preached the importance of sticking to Fahey’s system and playing team basketball.

“It’s about continuing to play as a team; it’s about sticking to our system and not trying to go one-on-one,” Wittinger said.

Illinois then faced Detroit Mercy, and while Fahey admitted it was not pretty, her team found a way to grind out a 73-65 victory to take an 8-4 record into the finals period for the student-athletes.

While the stretch between New Mexico and Virginia Tech resulted in losses, Fahey’s team has responded to that two-game funk and looks primed to be competitive in the Big Ten.