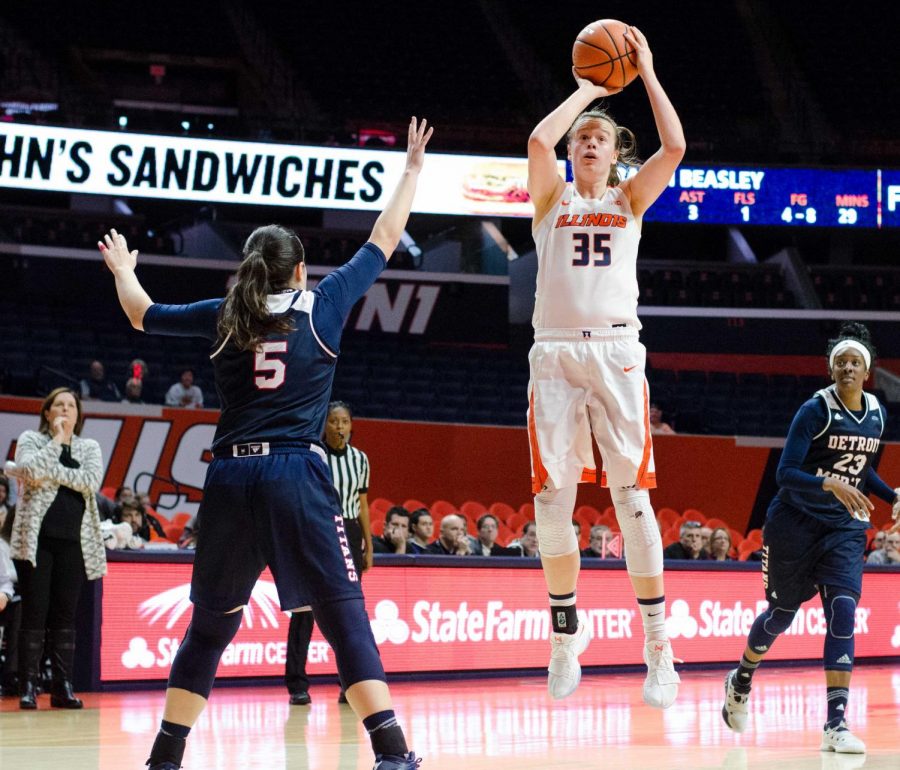 Alex Wittinger takes a shot for Illinois in their 73-65 win over Detroit Mercy on Dec. 10, 2017. The season hasn’t gone as well as planned, with the team most recently sustaining a tough loss to Nebraska on Wednesday. Illinois’ record is now 9-10.

The Illinois women’s basketball team is still looking for a win in the Big Ten. After coming up empty handed in their first four conference contests, the Huskers stuffed the Illini at home on Wednesday in an 80-72  contest.

Illinois now shifts to a losing record of 9-10 and is tied with Wisconsin for last place in the Big Ten with a record of 0-5.

“It was a tough one,” said head coach Nancy Fahey about the loss to Nebraska. “The kids played their hearts out. As much (as) I feel, they feel the same thing. We are just looking for a win. We got closer, but we aren’t in this to be close. Nebraska hit some key threes down the stretch.”

Nebraska shot 4-6 from three down the stretch to fend off Illinois.

The Illini might have to wait until Tuesday to improve upon their empty conference record thanks to the Huskers. But they didn’t go down without a fight — four Illini spilled over into double-digit scoring and a handful of season bests.

Junior forward Alex Wittinger posted a season-best performance with 23 points, which marks the 11th time in her career she’s scored 20-plus points within a single game. Wittinger also went 11-for-22 and snagged seven boards and three blocks.

“I’m not going to take anything away from Nebraska, but I think that we should have won,” Wittinger said.

Also stacking up season bests was sophomore guard Courtney Joens, who put up a season-high of 13 points. This marks the first time Joens has scored double digits this season, and the seventh time in her career as an Illini. She also went 3-for-5 in 3-pointers and nailed down three steals for the Illini in her 27 minutes on the court.

Sophomore guard Brandi Beasley joined her teammates in a season-first. The 5-foot-6 sophomore posted her first double-double of the season with 10 points and 11 assists.

Despite coming up short, the Illini trailed the Huskers throughout the contest. Each team flexed their offensive muscle, both sides sinking about 44 percent of their shots overall and producing almost identical scoring per quarter. Illinois gained an edge in the second quarter against Nebraska after battling back from their largest deficit of five points in the first.

The Illini went into halftime down 38-41, and used a massive 7-0 run in the third quarter to steal back the advantage from Nebraska. But Illinois ended the quarter down by four.

“That is something that we have struggled with in the past is coming out after halftime right away,” Wittinger said. “We need to learn to keep bringing that consistency and come out hard every quarter break and every halftime and be focused and ready to work hard every game.”

In the fourth quarter, Nebraska sealed the fate of the game with four 3-point goals with about a minute left on the clock. The Huskers pulled ahead and ended the match going 14-for-22 at the freethrow line and 40 rebounds.

Illinois has its sights set on redemption and a chance to finally improve their record against Michigan State at home on Tuesday at 8 p.m.