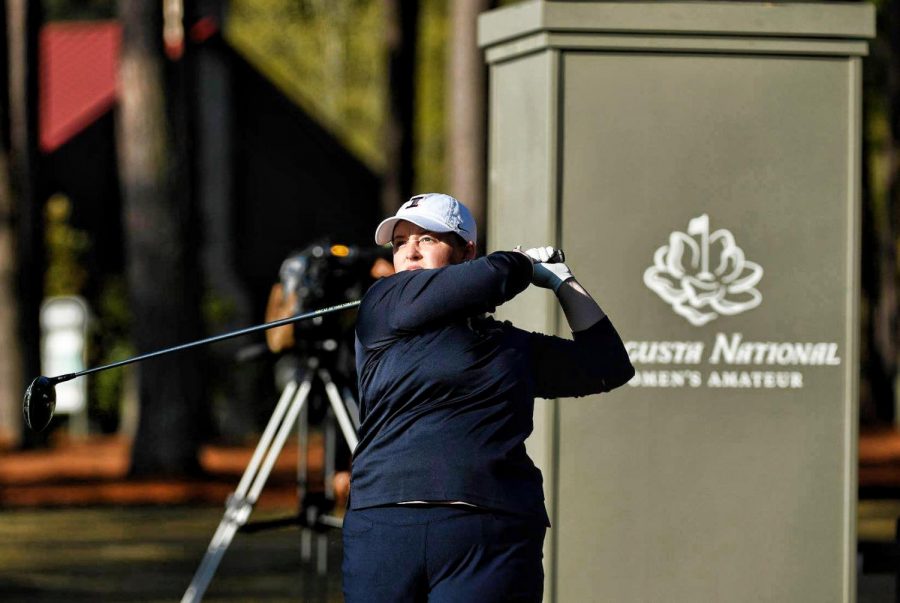 Senior Tristyn Nowlin watches her ball fly through the air during competition.

In a shortened year, these Illinois women’s golfers only needed a few meets to showcase their talent and get recognized. Senior Tristyn Nowlin and sophomore Kornkamol Sukaree were named to the All-Big Ten First Team and Second Team, respectively, while sophomore Reena Sulkar was nominated as Illinois’ Sportsmanship Honoree, given to golfers with upstanding ethical behavior and good sportsmanship.

Nowlin, a Kentucky native, has now made an All-Big Ten Team all four years she’s been at Illinois, although she was stuck on the second team for the first three years. After seeing her stroke average go up one her junior year, the preseason honoree put together her best season yet as an Illini, finishing with an average of 72.58 strokes.

Nowlin’s best performance this year came in the Cardinal Cup tournament, where she finished the three-day period with six strokes under par. Her stellar performance resulted her in taking home first place.

When the pandemic struck and ended her senior season, Nowlin, like many, believed her final season playing in Champaign would finish off anti-climatically. However, when the NCAA announced senior spring athletes would be granted another year of eligibility, Nowlin went on Twitter to announce she would take advantage of the fifth year option after she was nominated for the Dike Eddleman Athlete of the Year.

Sukaree, who hails from Thailand, has continued to show the Illinois coaching staff how big of an immediate impact she has on the program. As a freshman this season, Sukaree was named to the All-Big Ten First Team for her performance while recording the third-lowest single-season stroke average in program history at 72.62. Sukaree continued to perform very well this season, finishing with a stroke average of 72.78 in a season where she only got to play less than half as many events as her freshman campaign. With a dream of becoming a professional golfer, Sukaree is on track to come back for her junior season and try to recapture the First Team status.
Sulkar, the UIC graduate who’s currently pursuing her masters in business administration, is in the midst of her first year with the program before the shutdown. Sulkar chose Illinois because “(her) values strongly align with those adopted by the coaches and team members, and (she) fell in love with the campus and golf facility.”
Sulkar had an eventful sophomore year with the team, experiencing some fantastic individual achievements. Participating in five events, Sulkar averaged 76.8 strokes per round. Her best individual performance came in the Westbrook Invitational on Feb. 21, finishing with a round of 69.
Illinois plans on having many of this year’s athletes back for hopefully a full season, including the soon-to-be fifth year Nowlin. With the trio that helped Illinois finish in the top half of the standings in the majority of their tournaments returning next season, head coach Renee Slone can expect to compete for an even bigger prize: the Big Ten Championship.
@gourdiereport
[email protected]
Leave a Comment
MOST READ
1