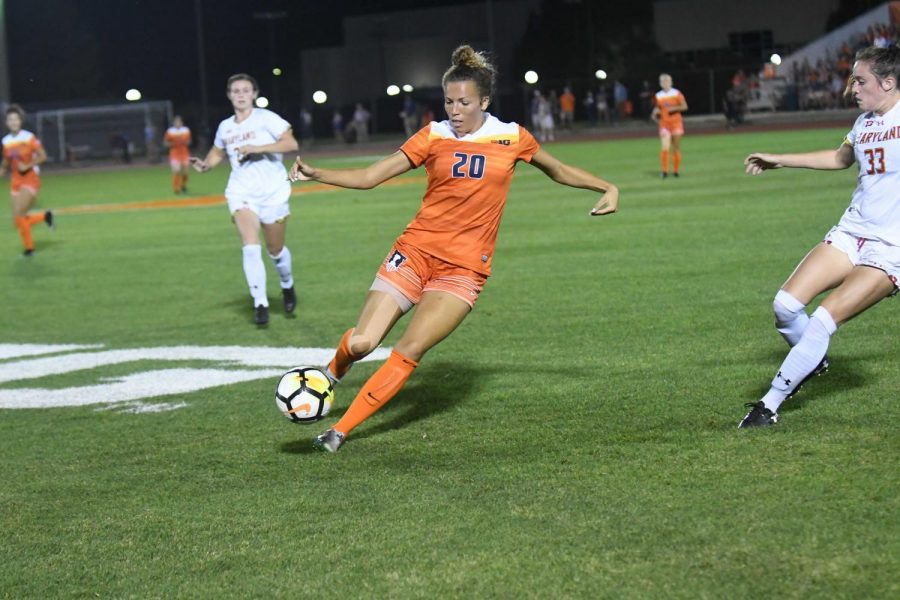 As the Illinois soccer team locked horns with Northwestern on a wet, windy Saturday night, the only concern on the minds of each team’s players was doing whatever was necessary to defeat its arch-rival.

The game was a defensive stalemate, which is exactly what coach Janet Rayfield had been anticipating in practice that week. She knew her team was going to have to work hard to carve out an opportunity to score.

“You can tell when you see the number of corner kicks that were played that it (was) a defensive battle,” Rayfield said. “That’s the way these games go. You have to defend, you have to weather the storm, and you have to find an opportunity to score. This is the kind of gritty, grind-it-out win that you have to have in the Big Ten.”

The game did see plenty of corner kicks. However, it was the Wildcats who attempted the lion’s share, as they had 10 compared the Illini’s three. This meant that sophomore goalkeeper Jaelyn Cunningham was under pressure all night, which she acknowledged, but praised her defense for aiding her.

“They definitely had a lot of chances,” Cunningham said. “I thought we made the most of (ours). We defended well today.”

The Illini made the most of their opportunities, as with just over 20 minutes remaining, senior Kara Marbury found the back of the net from a free-kick delivery for the third time in two games. Marbury acknowledged the contributions of her teammate Lauren Ciesla.

“Lauren, our primary free-kick taker, swung one in with her right foot and I just happened to get on the end of it,” Marbury said.

Rayfield herself acknowledged that while her team constantly works on set-pieces, converting them in a game is an entirely new challenge.

“The hard part about set-pieces is you can work on them a lot, but no two are the same “It’s never the same angle that you’re serving or the opponent sets up differently,” Rayfield said. “Their confidence and their decision making are growing, and that helps because now we can be even more unpredictable it’s not always scripted.”

The game marked the Illini’s first winning streak in over a month, and players, including Cunningham, seemed to sense a change in the overall mindset of the team.

“I honestly think it’s mentality.  We definitely had a tide turn against Penn State, but then we went back to our old ways,” Cunningham said. “We got a taste of what winning feels like against Indiana.  I think we’ve been replicating in practice and in games. That’s (what) led to our success.”

The win was especially significant for five members of the team as it was the first victory for the senior class against Northwestern.