Illini soccer on the cusp of breaking through 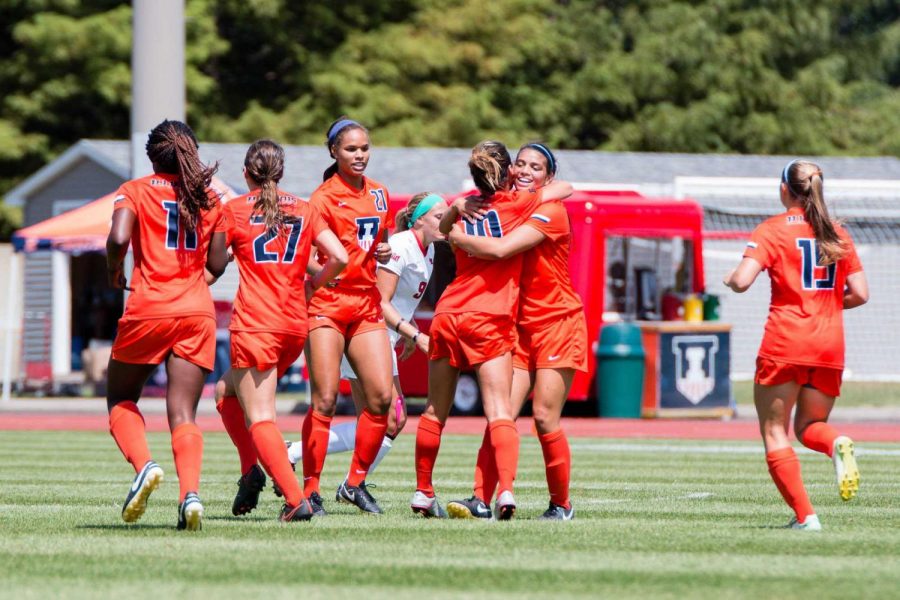 Illinois’ Allison Stucky gets a hug from Alicia Barker after scoring the only goal in the game against Illinois State at Illnois Soccer Stadium on Aug. 21, 2016.

The feeling of being on the cusp of success can be a double-edged sword: You are close to achieving your goals, but at the same time you are unable to take anything for granted without wasting the hard work already put in to succeed.

This is the position Illinois soccer head coach Janet Rayfield finds her team in as it heads into Saturday’s game at Michigan.

When she says her team needs to communicate better, Rayfield isn’t strictly talking about verbal communication. She additionally wants her team to work on its cognizance of each individual moment.

“It’s not just talking, it’s being aware of what’s going on,” Rayfield said. “I think that is something that we’ll focus on this week, proactive communication that is gonna help us with that one extra moment in the game.”

In preparation for Michigan (5-5-6 overall, 2-4-3 Big Ten), Rayfield is focusing on helping the team establish habits that will lay the foundation for future success.

“We’re going to play a team fighting for their position. We’re going to go in and fight to finish the season on a positive note,” Rayfield said. “The future of this program: That’s what were gonna focus on.”

While the season has been tough for Illinois thus far, Michigan has endured similar struggles, accumulating the same amount of conference victories.  However, the Wolverines have been able to hold on to three draws in the conference, which allows them to narrowly sit above the Illini in the standings.

Illinois will hope to keep that streak going, but will be without sophomore defender Alicia Barker, who received a red card in Sunday’s defeat to Minnesota. Rayfield made clear that Illinois will turn to the recently healed Lexi Carrier to take Baker’s place.

“Fortunately for us, Lexi Carrier, who has been out with an ankle injury, is gonna be back and physically ready to compete,” Rayfield said. “That’s the first option we have in terms of replacing (Baker).”

In a conference season where the Illini have been at times noncompetitive, occasionally just good enough to earn a victory, or often times a small-margin below their opponent, one thing has remained constant: Rayfield’s message.

“The message that we’re going to send doesn’t change: Get better every day, (and) be the most competitive team we can be on the field,” Rayfield said.