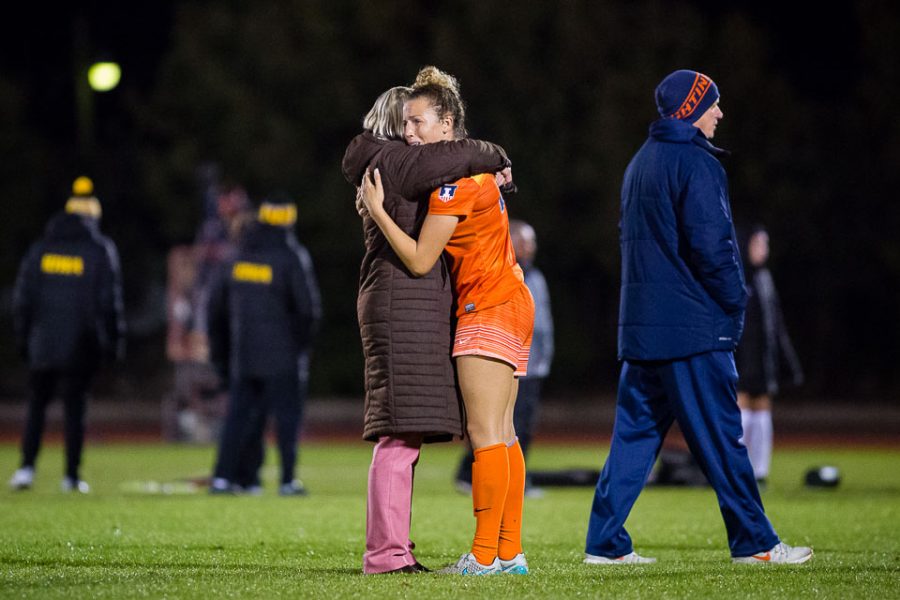 As the Illinois soccer team closed the season with nothing to play for, the only thing left to do was give everything to deliver a happy ending to its senior class’ careers Wednesday night against Iowa.

When Iowa’s Devin Burns found her way into the box and fired her ninth goal of the season past Illinois’ goalkeeper Jaelyn Cunningham just seven minutes into the match, the Illini’s task became a lot taller.

The Illini weathered the storm and even created some chances against the Hawkeyes, who were trying to protect their lead in search of a Big Ten tournament berth. But, the Illini couldn’t find the back of the net, and the Hawkeyes clinched their tournament bid.

Although emotions were riding high going into the game, head coach Janet Rayfield did not feel her team was affected.

“Certainly for the seniors it was an emotional night. It’s hard when you know going into it that it’s gonna be your last game,” Rayfield said. “For them it was emotional, but I don’t think it affected us. This team fought all the way to the end. They showed in the second half that (it) doesn’t matter what the score is, what our record is, they’re going to be Fighting Illini till the end.”

With three saves on the evening, Cunningham moved her total on the season to 106, which is second all-time on Illinois’ single-season list.

Reflecting on her senior class, Rayfield knows that while the results were not what they expected, the Illini program has prepared it to be successful in the future.

“A team that fought, a team that didn’t have the results that they expected or that we expect as a program, but I told them that this senior class is going to go on to do great things,” Rayfield said. “Their (careers) here, irrespective of the record, I hope was a springboard into those great things.”

Meanwhile, as she evaluated the season as a whole, Rayfield feels that her team underachieved. To improve, her team must get back to the basics.

“You look at his record and this isn’t, from the results standpoint, the season we expect to have. This team struggled to score goals and you don’t win soccer games without scoring goals.”

As Rayfield turns her attention to next season, she wants to develop that goalscoring trait within her players.

“When you look at our performance, we’ve got to develop our players into goalscorers. That is something we’ll look to do as we move on to next season,” Rayfield said. “I don’t think there was a game this season, except for Ohio State, that we didn’t feel like we could compete with the (other) team on the field. We’re gonna step out next fall expecting that we can compete with anybody in the country.”