Softball gears up for second tournament of season 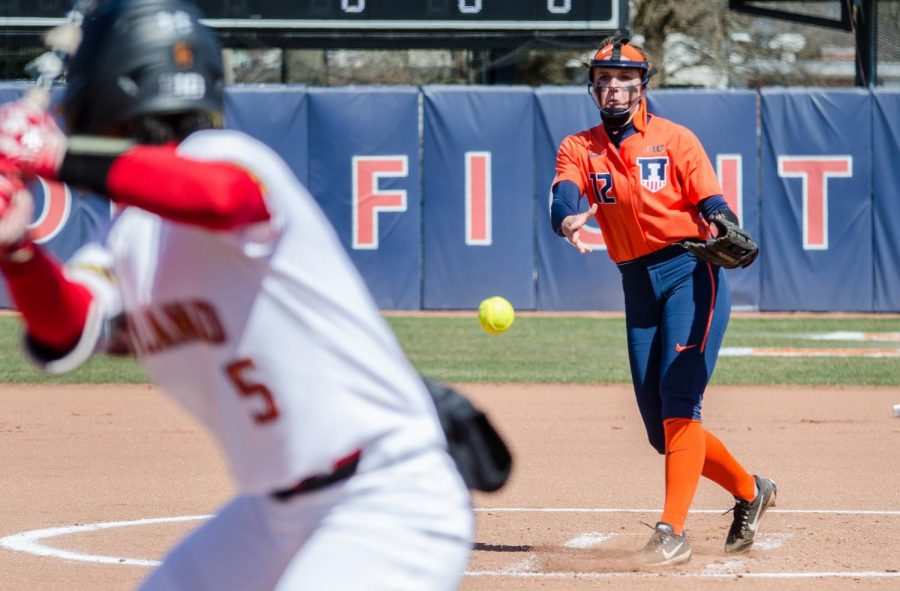 Illinois pitcher Taylor Edwards throws a pitch during Illinois’ home game against Maryland on April 7. The Illini are preparing to play in their second tournament of the 2019 season.

Illinois softball will be back on the road this weekend for its second tournament of the season.

Once again, the Illini are heading for a much more temperate climate to compete in Atlanta. There, the team will be hosted by Georgia Tech and the two teams will face off Friday at 4:30 p.m. CST. Illinois and Georgia Tech are joined by Boston College, which will play Illinois Friday at 11:30 a.m. CST to kick off the tournament.

Head coach Tyra Perry and the Illini come into the weekend with two victories and some major learning moments. Illinois defeated two ranked teams while in Houston on Feb. 8, but also lost to Oklahoma State and Sam Houston State on Saturday and Sunday, respectively.

Senior outfielder Kiana Sherlund entered the season with a fair amount of attention. The unanimous 2018 Big Ten Conference First Team honoree made her way to a national player of the year watch list. But as the season gets going, Sherlund and her fellow seniors know there’s a lot of softball left to play.

“It’s our last year, so I think that’s the biggest change — making sure we give our all every single time because it’s the last time,” Sherlund said. “Don’t want anything left in the tank.”

With nine seniors currently playing in Illinois uniforms, Sherlund is far from alone in experiencing the desire to leave everything out on the field.

According to Perry, the experience the senior Illini bring with them will prove more and more important as the season progresses, especially as the program works to manage growing expectations. The 2019 season marks Perry’s fourth season as Illinois’ head coach, making her connection to this senior class all the more significant.

“Our seniors are people that we’ve coached. Maybe we didn’t recruit them, but we’ve coached them their entire career,” Perry said. “So we are ready to take a step up.”

But the role of the underclassmen in the Illini’s success this coming weekend cannot be overlooked — especially when the first homer of the season came off the bat of sophomore catcher Bella Loya. Loya established herself as Illinois’ resident slugger during her freshman year, leading the team with 10 home runs during the 2018 season, a stat which made her ninth overall in the Big Ten.

The sophomore slugger already has four home runs on the season after play in Houston, but Loya emphasizes the greater successes lie more in the team’s success and how they connect both on and off the field than in her individual accolades.

“I think as a team we were pretty close last year but I think this year it’s a different kind of connection we all have together,” Loya said. “And I think that connection off the field is really helping us on the field as well. Personally, I kind of know what to expect more and I’ve matured a little bit since last year.”