Board games bring players together before big games 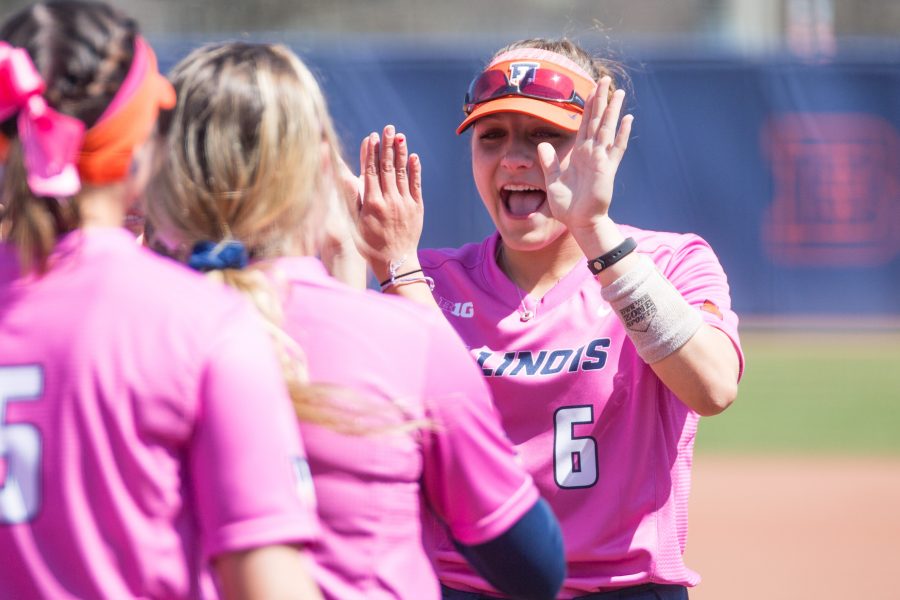 Illinois’ Kiana Sherlund is introduced against Purdue on April 8, 2017. The team discusses the bond formed between the players as they travel on buses and on planes for games.

Whenever a new season of Illinois softball begins, there are a few inevitabilities. The biggest being the time spent on the road. With conditions in Champaign less-than-ideal for spring sports until most students have left campus for spring break, the Illini can expect to be packing their bags and hitting the road at the start of the season.

For newer Illini, this often means adjusting from old ways of traveling to and from tournaments in high school or earlier; freshman players will find themselves traveling in packs with more seasoned veterans instead of relying on mom and dad when necessary.

Oftentimes this means going through airports in groups of three to guarantee everyone gets where they need to be, making big trips a major team effort.

Rookie pitcher Sydney Sickels admitted she noticed the differences between traveling in high school, but still gets to spend time with her family when they travel with the team.

“It’s a lot more team-oriented,” Sickels said. “In high school, we were able to kind of go with our families more, but when we go in college, it’s kind of all as a team. You get some time with your family but not as much. They’re still there and you get to see them once in a while.”

By the time players get to be seniors, like third baseman Annie Fleming, being on the road becomes almost second nature. It isn’t unusual for traveling Illini to be spotted finishing homework in airports or toting a textbook onto a bus whenever they’re away.

Fleming assured they all still find ways to have fun while traveling to and from tournaments — specifically by playing a different kind of game.

“We play board games; we play ‘Head’s Up’ in the back of the bus,” Fleming said. “Especially like these first few weekends, it’s really easy to bring that energy because it’s all brand-new. I think just talking — and a whole bunch of people getting pictures of people sleeping — just little things like that, that’s always really fun.”

As a senior, Fleming also knows who she likes to team up with when getting competitive. Fleming shared she and fellow senior Kiana Sherlund enjoyed a victory against junior pitcher Akilah Mouzon and sophomore Katie Wingerter this past weekend while playing a board game.

But just because the Illini are Division I athletes doesn’t mean they don’t run into some major delays or mishaps like any other traveler. Sometimes, the problems can be easily fixed, like packing the wrong jersey. Other times, they can make getting home on time for that first class on Monday nothing short of stressful.