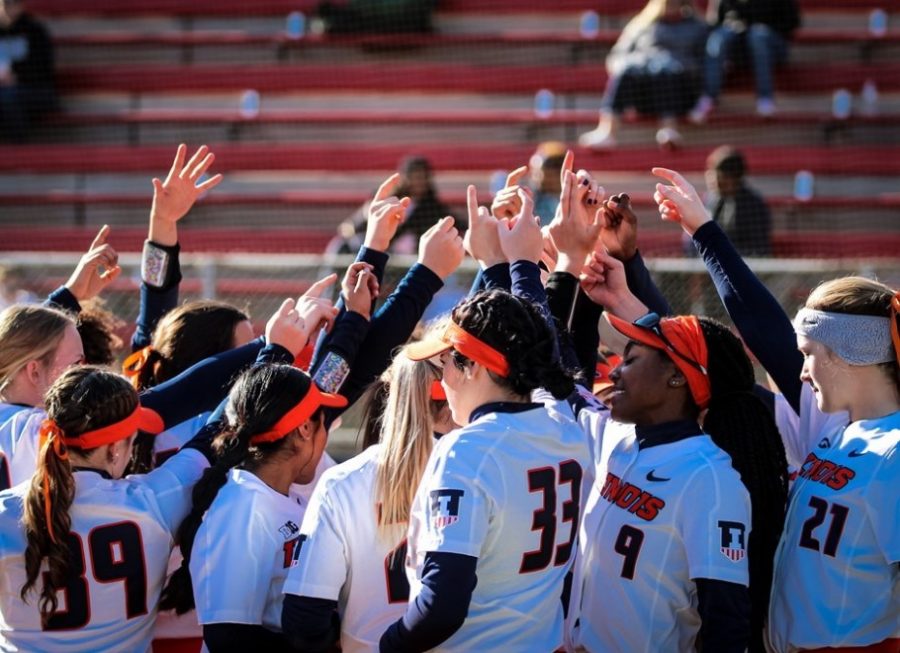 The Illini softball team huddles before the game against Notre Dame on Feb. 15 at Melissa Cook Stadium. The Illini lost 10-1.

Illinois softball was set to host the Big Ten softball tournament for the first time in program history May 7-9.

Head coach Tyra Perry and the Illini had been looking forward to the tournament since the winter.

“We are excited to have the honor of hosting the Big Ten Tournament this year,” Perry per Fightingillini.com in December 2019. “Our event staff has been working very hard to provide a top-notch championship environment for our student-athletes and fans. The Big Ten Tournament has always proven to be a spectacular event where our student-athletes can showcase their talent and represent their university with pride.”

The Illini had an 11-11 record and were coming off a big road victory over Missouri when Illinois sports information director Libby Knight said in a text message March 13 that the tournament was canceled.

The Big Ten had originally stated that all events would be canceled but on March 13 announced that the conference would reassess after April 6.

Adam Augustine of the Big Ten said in an email: “At this time, we would have no further comment beyond our recent statements, which can all be found on bigten.org.”

Hosting a major event like the Big Ten softball tournament would generate revenue for the University and to the community.

Typically, an event with the magnitude of the Big Ten tournament generates thousands of dollars of revenue for the community.

Mike Koon, director of sports, special events and film of Visit Champaign County, said the collective impact on the economy by hosting the Big Ten softball tournament was projected to be $482,000.

While Koon did not break down the individual totals, the total sum included things like lodging and food.

With tournaments, like the one Illinois was set to host, being canceled around the country, other businesses are affected by it. Hotels and restaurants are seeing decreased business across the state and nation. Tuesday was National Takeout Day.

The hotels have been hit hard by the pandemic, with the I Hotel on campus having rooms at a discount.

However, hotels were going to be less impacted by the cancellation. Katie Taylor of Illinois athletics explained in an email that the university had agreements for hotel rooms at the I Hotel, Hyatt Place, Holiday Inn, Homewood Suites, Home2 Suites, Hilton Garden Inn, Courtyard Inn, Fairfield Inn and Hampton Inn.

The University does not normally block rooms for visiting guests. Taylor said she gives visiting teams a brochure of hotels to choose from, and they make their own hotel arrangements.

However, once the tournament field is set, which consists of 12 Big Ten softball teams, the teams get hotel assignments. Taylor said that the teams would have been assigned hotels based on need.