Team of the century: 2010 Illini softball storm through regular season 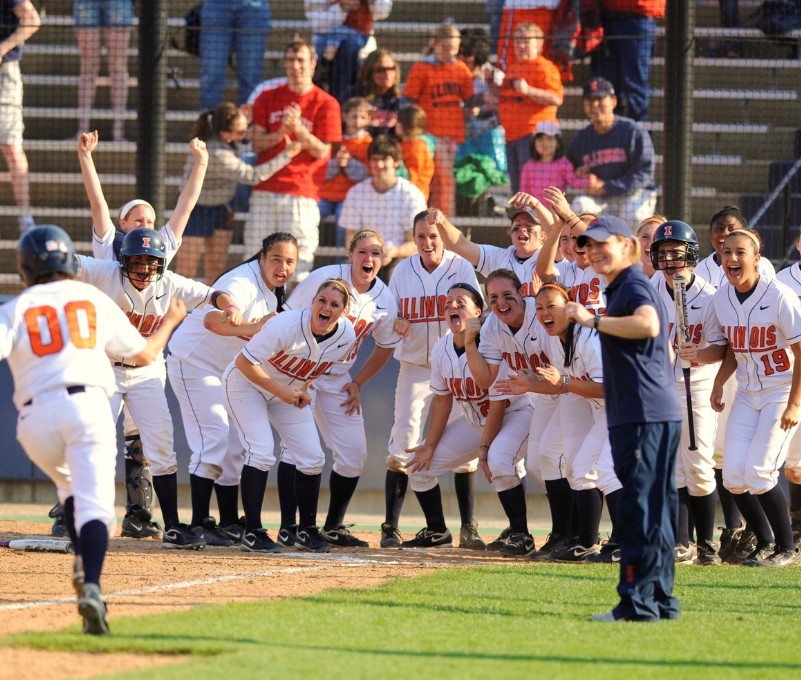 The University of Illinois Softball Team celebrates a walk-off home run during the match against Ohio State on April 10, 2010.

The Illinois softball program hasn’t set the world on fire in this century, but they have been a steady force in the Big Ten. With six NCAA tournament appearances since 2000, Illinois is a program that has had success as a Northern program. In 2010, though, Illinois put together one of the most dominant and special seasons in Big Ten, let alone school, history.

Going into 2010, the Illini were coming off of a respectable 2009 season, finishing 29-17 with an early exit in the NCAA tournament. After their season ended with a loss to in-state foe DePaul, Illini head coach Terri Sullivan saw the team’s potential.

“We got a lot of great play from the young players on our team this season,” Sullivan said. “So obviously that’s exciting for the future. Our senior leadership helped us get back to the postseason, and it’s where we feel we belong.”

Despite losing a few key seniors heading into 2010, the Illini brought back some great talent, led by slugger Meredith Hackett and aces Pepper Gay and Monica Perry.

Hackett, who only batted .229 with seven home runs in 2009, saw the most significant improvement on anyone on the team, improving her batting average to .418 with 16 home runs, culminating with an All-American selection by season’s end.

With the momentum of an NCAA tournament season the year before, this Illini team had the goods for a special year.

The Illini didn’t start the season with high expectations, but they quickly took the country by storm with an impressive opening stretch. Starting the season in Nevada at the UNLV Sportco Kickoff Classic, the Illini went 5-0 and outscored the opposition 43-6.

The team would end up finishing the non-conference portion of the season 23-3 with victories over three ranked teams heading into conference play. The most impressive stat is how this wasn’t a team riding the coattails of one player; they were batting was .338 after the first 26 games.

Still, despite the outstanding record, the Illini weren’t getting as much love as other Big Ten rivals, ranked only 18th going into a showdown against No.2 Michigan in Ann Arbor. After their one-game series against the Wolverines, the pundits looked right.

Despite another home run by Hackett, her fourth in five games, the Wolverines blasted the Illini 7-1, showing that the Illini were still a little behind the cream of the crop.

“Our offense is good, but we were shut down today and needed more disciplined at-bats,” Sullivan said after the game. “Meredith played well and hit the ball hard. The rest of our offense now has to step up and put the ball in play.”

The Illini didn’t let one setback derail a historic season, however, as the Illini would go on a tear, losing only one more Big Ten game going into the NCAA tournament, securing a season sweep of eight Big Ten teams. After knocking off Minnesota 10-0 on Senior Day, securing a 16-2 conference record, Sullivan lobbied for the team to be awarded the opportunity to host the NCAA Regionals.

“We certainly feel we’ve earned the right to host,” Sullivan said. “Our team is playing great softball, and we have a community that supports it and a facility that is great to play in and watch. Honestly, though, we’ll play anyone, anywhere, anytime. We’re just looking forward to continuing to play well in the NCAA Tournament.”

Unfortunately for Illinois, rival Missouri, the No. 8 team in the country, was given preference, meaning they would have to go through Colombia, Missouri, if they wanted to avoid another first-round exit.

After ending DePaul’s season, who had knocked the Illini out of the tournament the year prior, 9-1, Illinois had to beat the Missouri Tigers twice on the road to advance.

Hackett hit another home run to improve her total to 16, but that wasn’t enough as the Tigers held off an Illini rally, securing a 4-2 victory.

“Pepper did a great job coming in for relief,” Sullivan said after the game. “She came in and tried to keep the game where it was. I’m excited about where Pepper, Monica and Jackie are going to take this team as a pitching staff.”

While Sullivan was looking ahead to what she thought was a bright future, this season ended up being the peak of the Sullivan era. Despite bringing back the trio of pitchers and All-American slugger Hackett, the Illini stumbled out of the gate in 2011, finishing 27-22 and missing the NCAA tournament. The Illini wouldn’t reach it again until 2016, the first year under current head coach Tyra Perry.

Still, this was one of the most electric lightning in a bottle season this program has ever seen. They couldn’t get past the first round, but that’s what happens in college sports. Only losing eight times in a single season is a remarkable accomplishment in what is the highlight of the Sullivan era and the Illini program since 2000.