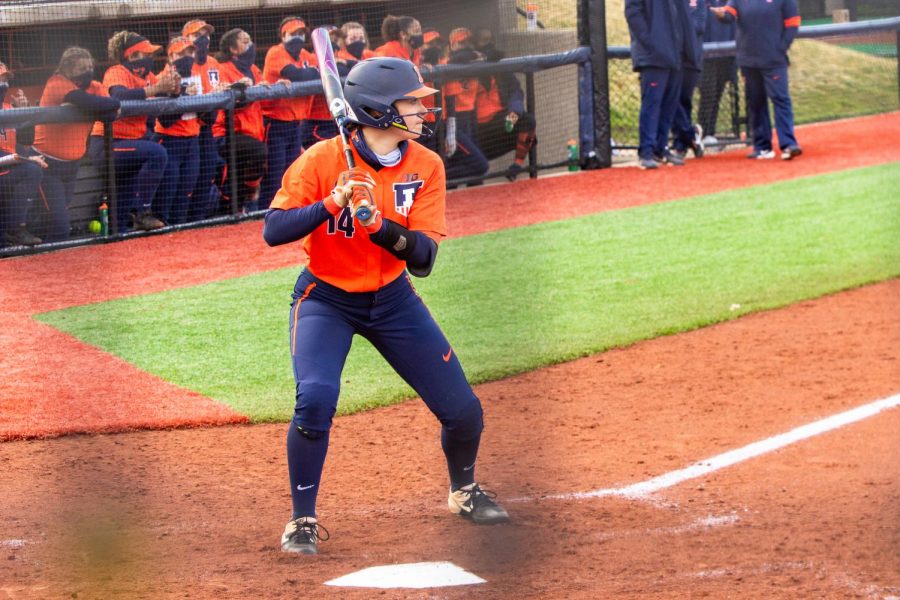 Sophomore Kelly Ryono prepares to bat in a game against Minnesota on Friday. The Illinois softball team is preparing to face Wisconsin this weekend with the same mindset they had to previously beat Minnesota in their final series game.

As the team departs for Madison, Wisconsin on Thursday, they have three key factors in mind: toughness, to go out and do what they do best, demonstrating their competitive excellence; unity, to help them play as a cohesive entity — an element they’ve presented from the start of the season; and potentiality, to be able to stay calm and continuing to play with their collective, vigorous energy.

The Illini are prepared to pick up where they left off from their last game, an 8-0 victory against Minnesota carrying their determination to succeed and perform to their best abilities against Wisconsin this weekend in a four-game series.

With high expectations moving forward, the Illini strive for the Big Ten Conference Softball Champion title. However, their endeavors do not stop there. Illinois is determined to make it to and through the final portion of the NCAA Division 1 Softball Championships — from Regionals to Super Regionals, all the way to the NCAA Women’s College World Series.

“As we continue to progress, grit and toughness is something we as a team have been working on,” said senior Maddison Demers. “Having gritty at-bats and gritty plays, but also playing for the person that’s next to you and not focusing on yourself as much.”

Day by day, the Illini aim to not only grow individually, with their own talents and skills, but continue to establish congruence as they bring their abilities together. They are ready to outperform Wisconsin with their toughness, unity and potentiality.

Like most teams, Illinois has challenges that they face and overcome. However, they have perseverance despite the difficulty of any obstacle, big or small. They walk onto the field ready to dominate with their pitching, fielding and hitting. Knowing that when they make their last plays, they gave it their all.

“Something we try to remember is to not let the little things get to us, having those gritty plays and gritty at-bats and coming together more as a unit,” Demers said.

With a team batting average of .300 — the best in the Big Ten — the Illini proceed in getting those timely hits in order to score runs. They have a motto of “pass the bat,” which emphasizes going up to the plate and having a quality at-bat, setting the tone for the upcoming hitter.

The team’s willpower to accomplish what is necessary in order to continue on track with their victorious scoring assists them as they move forward into the season. With a current record of 11-5, Illinois is adamant about achieving success as a unit and prospering throughout.

“Mentally and physically, we’re just really focusing on making sure we have high energy and we’re locked in all the time,” Demers said.

Illinois strives to continue to bring their physical and mental capabilities to the field this weekend in Madison. Currently their opponent sits at a 4-12 record with an eight-game losing streak.

The Illini will be facing the Badgers in a four-game series, starting Friday at 3 p.m. The series will continue into a doubleheader on Saturday at noon and 2:30 p.m.; later, ending with their final matchup Sunday at 4 p.m. All games will be available to watch on either the Big Ten Network or the Big Ten Network +.