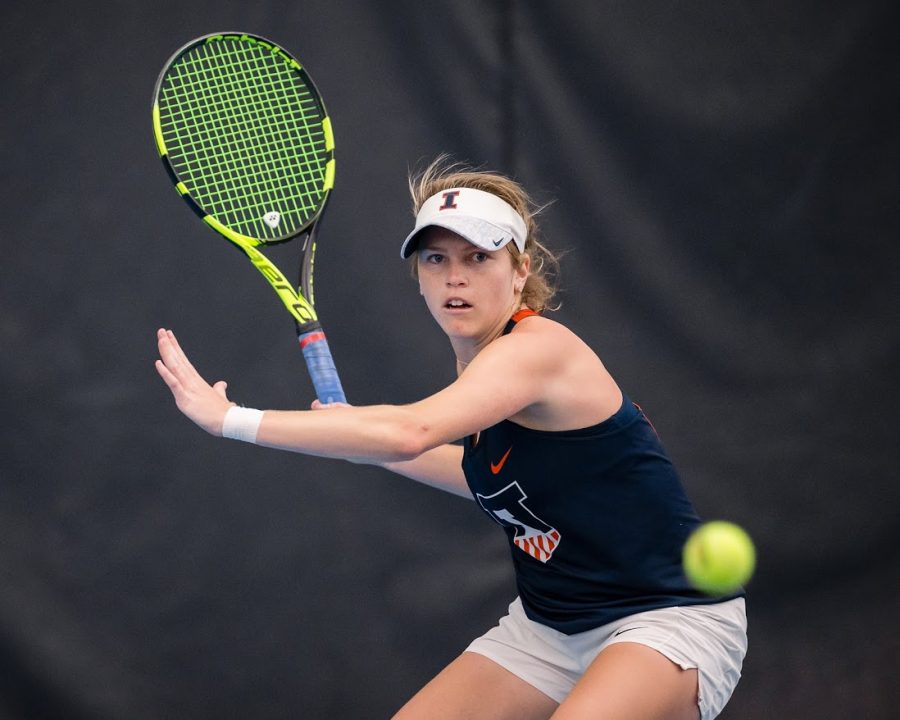 Illinois’ Jaclyn Switkes gets ready to return the ball during the match against Rutgers at Atkins Tennis Center on Friday, March 29, 2019. The Illini won 6-1.

Somebody hand Illinois a broom and a dustpan because it just swept the tennis courts at Maryland this weekend. The Illini went through a rough patch this season with three straight losses, but they ended their losing streak during the match against the Rutgers Scarlet Knights on Friday and kept up the momentum in their match against the Terrapins on Sunday.

The Illini triumphed over the Scarlet Knights, 6-1, and the Terrapins, 4-0, making this their eighth straight win over Maryland. The Illini now have an 8-9 record and a 3-2 record in conference.

Sophomore Emilee Duong and senior Daniela Pedraza Novak were the doubles pair that started it off for the Illini. The duo claimed a 6-2 victory over the Terrapins’ Arnelle Sullivan and Anastasiia Gevel. Soon after, sophomores Asuka Kawai and Mia Rabinowitz claimed their victory, 6-1, over Saya Usui and Katsiaryna Yemelyanenka. The Illini have taken the doubles point in 11 matches so far this season, per fightingillini.com.

No. 54 Kawaii has been playing some of her best tennis across the last few matches. On Sunday, she beat her opponent Millie Stretton, 6-2 and 6-1, on court one. Kawaii came in clutch the last few matches the Illini lost and said the team had its confidence boosted after its last two wins.

“We talked a lot about how we wouldn’t put any pressure on ourselves,” Kawai said. “It’s been a tough season with lots of ups and downs. We’ve just been telling ourselves to keep our confidence up and to keep believing and trusting in one another and the match would work itself out.”

Along with Kawai’s stellar singles match, the other Illini singles competitors played to their best abilities as well. Senior Jaclyn Switkes finished her set on court three with a 6-0 and 6-2 win. Sophomore Sasha Belaya came through with her 6-1, 6-3 win over the Gevel on court four.

Belaya’s match against Gevel remained unfinished due to the Illini getting the full doubles points from the other doubles matches they had won.

The Illini’s tenacity has spiked significantly after this weekend, according to Belaya. She said after playing against very competitive teams, they’re feeling confident going into their upcoming matches.

“Going into practice this week, we talked about how these teams (Michigan State and Michigan) are really good,” Belaya said. “We just need to take it one match at a time.”

Illinois will host Michigan State on Saturday and Michigan on Sunday at the Atkins Tennis Center.