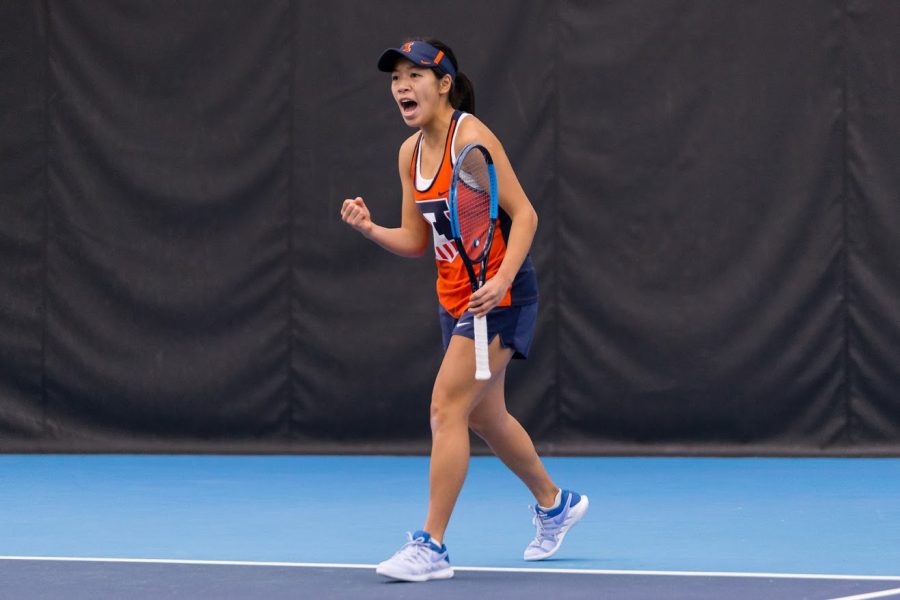 Illinois’ Asuka Kawai celebrates during the match against Notre Dame at Atkins Tennis Center on Friday, Feb. 8, 2019. The Illini won 4-3.

The Spartans couldn’t withstand the force of the Illini this weekend and lost at the Atkins Tennis Center 6-0.

This Saturday, the Illini were at home for the first time in a month and able to play their match under a blanket of sunshine and 70-degree weather. And the Illini brought the heat onto the courts.

The Illini also dominated the courts during their singles matches, using the same energy they had during doubles play. Sophomore Emilee Duong was up against freshman Nicole Stephens and went 6-1, 1-6 and 7-5. On court six, senior Daniela Pedraza Novak took a 6-0, 6-7 (3), 6-1 win over Metcalf. Rabinowitz prevailed against Lemonds with set scores of 6-2, 7-6 (6).

On Sunday, Illinois went into its match against No. 18 Michigan with an undefeated record at home. Unfortunately, the Illini weren’t able to keep up the same momentum they had while competing against the Spartans.

The Illini started off strong in doubles play with a victory from the pair of Duong and Novak over the Wolverines’ junior Giulia Pairone and freshman Anca Craciun 6-3. Another victory from the team of Kawai and Rabinowitz came through over Michigan’s sophomore Alyvia Jones and junior Chiara Lommer 6-4. According to fightingillini.com, the Illini have won 14 doubles points this season, including seven in the last eight matches.

Michigan came through in the singles matches, taking wins on four courts to secure the win over Illinois. Duong triumphed over Michigan’s Craciun with 6-4, 4-6, 1-0 (8). Pedraza Novak also took a 6-4, 6-4 win over Jones.

The Illini’s current record is 9-10 overall this season and 4-3 in conference play. The team will be hitting the road for matches against Wisconsin on Friday and Minnesota on Sunday.