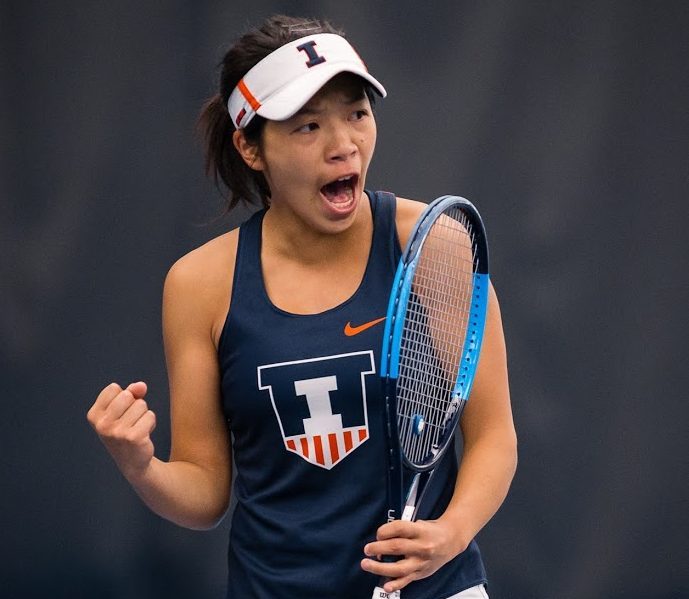 Illinois’ Asuka Kawai celebrates during the match against Rutgers at Atkins Tennis Center on Friday, March 29, 2019. The Illini won 6-1.

The Illinois women’s tennis team competed against Wisconsin and Minnesota this weekend and cruised through both matches for the wins, 5-2 and 6-1, respectively. The Illini have been working harder during practices, according to the team, and it’s reflecting well during their most recent matches.

The Illini were unable to clinch the doubles points, but the doubles pair of sophomores Asuka Kawai and Mia Rabinowitz put the Illini on the board with a 6-4 win.

It was the fight of the sophomores in Madison, Wisconsin, on Friday during singles play and the Illini secured wins in 5 out of the 6 singles matches. Sophomores Kawai, Emilee Duong, Rabinowitz and Sasha Belaya all managed to defeat each of their opponents.

“As a team, we’re on the up and coming,” Duong said. “We climbed the plateau, now we just have to keep moving forward.”

The Illini headed to Minneapolis, where they sent the Golden Gophers back to their burrows on Sunday.

Illinois took to the courts ready for whatever Minnesota served. The team started off strong in the doubles matches, with the pair of senior Daniela Pedraza Novak and Duong dominating Tina Kreinis and Caitlyn Merzbacher with a 6-0 win, giving the Illini the early advantage point. Not long after, the team of Belaya and senior Jaclyn Switkes took to the court, taking down Cammy Frei and Tiffany Huber with a 7-5 win.

The Gophers came up to tie the Illini early on during singles play, with Huber of Minnesota taking a 6-2, 6-4 win over Rabinowitz. The Illini responded forcefully, securing wins on the other five courts.

“We went into these matches with the intention of taking care of business,” Rabinowitz said. “These teams are a lot stronger than they used to be, so we had to remain focused throughout and I think we did an amazing job locking our focus into these matches.”

Illinois hosts Penn State on Friday and No. 11 Ohio State on Sunday at the Atkins Tennis Center. Rabinowitz said they’re really looking forward to competing this weekend after securing two Big Ten matches on the road.

“We’re really excited for these upcoming matches,” Rabinowitz said. “It’s the last Big Ten weekend of the year and I’m confident we can finish this season even better than we did last year. Playing them at home means that there’s a little more on the line, but we’re ready to make this one memorable.”

The Illini’s match against the Buckeyes marks the team’s Senior Day and Duong said they’re looking to “take the W” at this one.

“Ohio State is usually ranked higher, so we really have to focus on the details of our game and work a little harder,” Duong said. “Coach (Evan Clark) really wants the W and it’s Senior Day, so we’re all really focusing on every aspect of our game to make this match one to remember.”