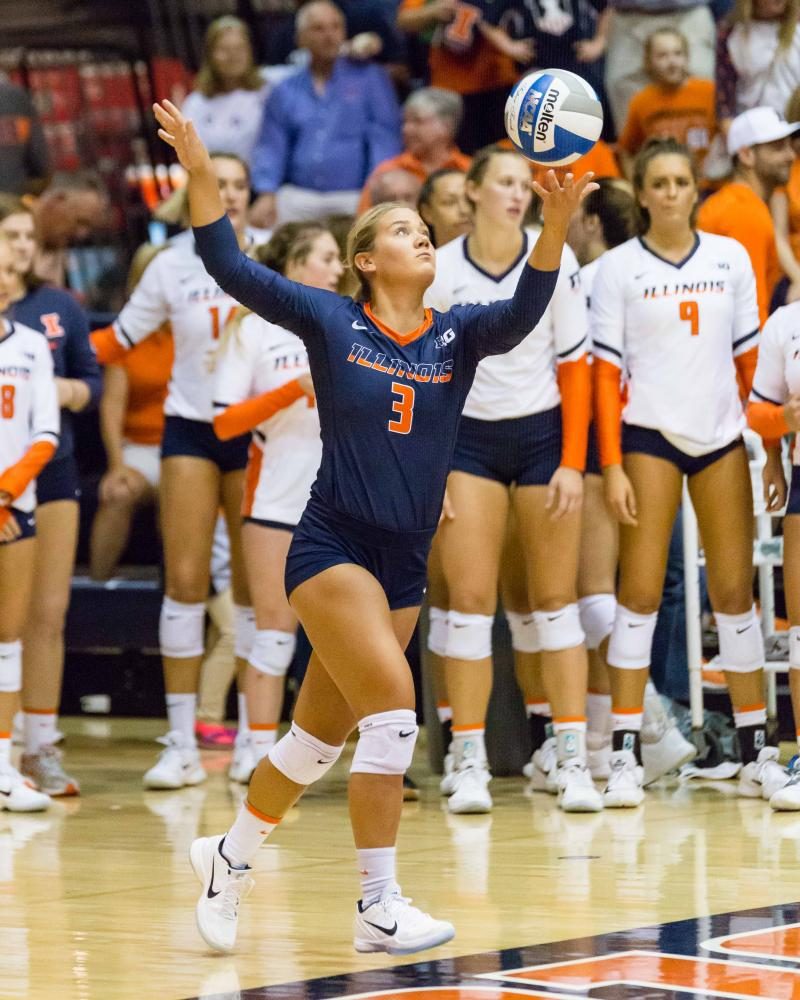 Illinois defensive specialist Brandi Donnelly serves the ball during the match against Stanford at Huff Hall on Sept. 9.

The Illini are returning home with a 3-0 run at the Dr. Mary Jo Wynn Invitational this weekend, but not with a trophy.

Despite a flawless record at the invite, Illinois finished second to Washington State as a result of set differences.

Junior setter Jordyn Poulter and freshman Tyanna Omazic were named to the All-Tournament team. Illinois kick started the invitational at Missouri State with a 3-1 win over Chattanooga Friday afternoon. The team followed up its success with a 3-0 sweep over Tennessee State Saturday morning.

A five-set comeback battle against Missouri State Saturday afternoon concluded Illinois’ non-conference competition and marked the end of the fourth tournament the Illini appeared in this season.

Senior Brandi Donnelly dug up 25 balls and fell one short of her career high against Missouri State. She said that the match marked her team’s peak performance during the invitational and was a chance to display the team’s defensive identity.

“Our match against Missouri State today had a ton of digs and was really back and forth,” Donnelly said. “I think we started it a little bit slow, we had a quick turn around though. We worked hard in general and we ended the tournament with a tougher team and really worked.”

According to head coach Chris Tamas, the team capitalized on its opportunities throughout the tournament.

“We fought well. Sometimes it’s good to really get out a win,” Tamas said. “They jumped on us during a couple of rotations, but we chipped back too little, too late. The rest of the way was pretty much back and forth.”

“I thought we took some good swings. We missed a lot by just a little bit,” Tamas said. “But execution was happening, and we made nice choices late in the match and were able to stay aggressive without being out of control.”

Hranicka said that playing consistently was a key component during all three matches.

“I think I really started playing more consistently. It was an overall team effort,” Hranicka said. “I think we did (well defensively). We started figuring out where their tendencies were.”

Against Tennessee State, Hranicka lead the Illini with 12 kills in front of Omazic’s eight.

The freshman middle blocker saw major court time for the first time this season, and according to Hranicka, it was an opportunity for newer players to make an impact.

“It was cool to see Tyanna out there, and have some new faces out on the court,” Hranicka said. “She had a few big moments, which made everyone’s jobs easier.”

This Wednesday will mark the beginning of Big Ten play as the Illini face off against Indiana on the road.

Practicing for conference competition doesn’t mean doing anything new. According to Tamas, finishing matches under five sets is going to be a main focus for the Illini looking forward.

“We expect more of the same once we step into conference play. The Big Ten conference is deep as ever, and we need to take care of business earlier than five steps, especially with such a young team too,” Tamas said. “We expect that and try to train for it. We do most of our prep over film.”