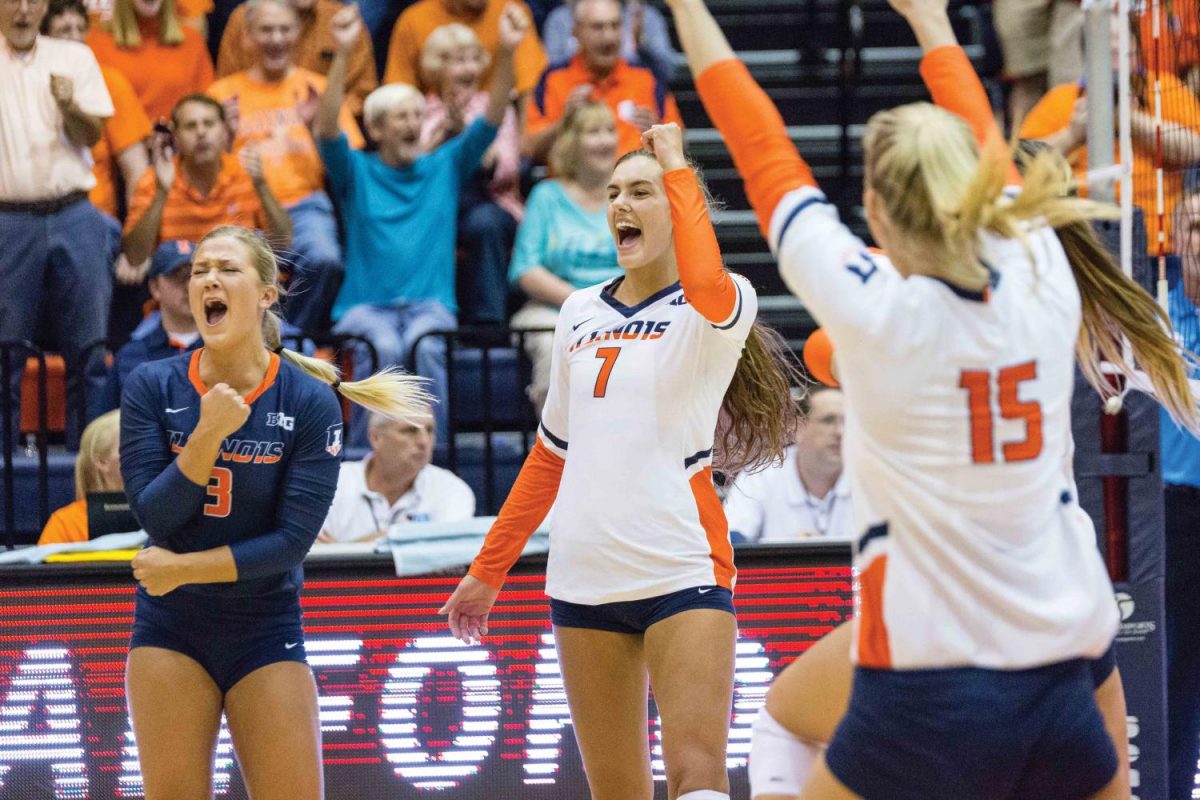 Illinois outside hitter Jacqueline Quade (7) and defensive specialist Brandi Donnelly (3) celebrate during the match against Stanford at Huff Hall on Sept. 8.

Some collegiate volleyball players — like sophomore Jacqueline Quade — are lucky.

When athletes hang up their high school and club volleyball jerseys for good, they often say goodbye to a slew of teammates they grew up playing the game with.

Coaches pull players in all different directions, breaking up a sisterhood built on volleyball one Division I school at a time.

However, some athletes are able to hang onto a teammate or two as they begin the journey into their college careers.

Quade is one of the few Illini that currently play with someone from their days in club volleyball.

“Actually, me and Beth (Prince) played one year of club together in high school. It was her senior year, my junior year,” Quade said. “And then I played against a lot of the girls (on Illinois). I know I played against Ali (Bastianelli) a couple of times and Caroline (Welsh) once.”

Although Quade moved from Fort Wayne, Indiana, her Munciana and Fort Wayne Volleyball Club teams reached farther than just the Midwest. She says that no matter where you’re from, the club volleyball world is full of familiar faces.

“Club is a pretty small world,” Quade said. “We all know each other just because we’ve played with and against each other.”

Junior setter Jordyn Poulter came to Illinois from the Denver area, but she still plays with one of her former teammates as an Illini.

“(Me and Blayke Hranicka) played our 18 years of club together,” Poulter said. “We’re both from the Denver area and, yeah, she was at NC State and she was looking for a change, and we needed another middle and it was a good fit.”

Poulter said playing alongside her former teammate has helped her grow as a volleyball player and as a person.

“I think both of us have matured outside the gym as well as just become stronger athletes,” Poulter said. “And obviously, the longer time you play the game, the better your IQ is going to be in different situations on the court.”

For lone senior Brandi Donnelly, her days playing club volleyball seem farther away than her teammates. Throughout the past three years, she has had the chance to play with some of her club teammates and has also seen them leave the program as stronger athletes and people.

“(I haven’t played with anyone) so much now, but last year, I had played with a few of the seniors,” Donnelly said. “I knew a lot of players when I came in as a freshman, from seeing them in club and other tournaments. One of them played at my sister club too.”

Donnelly, a Williamsville, Illinois, native, played for Elite Cardinal and played at AAU Nationals three years in a row. She says that being near the Chicago area gave her countless opportunities to play against girls she would later see in college.

“You always saw a lot of people at tournaments,” Donnelly said. “It’s fun to look back on people on the other side of the net and think, ‘when have I seen them before?’ or ‘I think I knew them.’”

Like Hranicka and Poulter, most of this season’s team are players from Illinois, but a handful are from hours away from the Land of Lincoln.

One of the freshmen, outside hitter Megan Cooney, says her experience playing club around Kansas City was one that helped introduce her to a handful of her current teammates.

“I played against Tyanna (Omazic) a lot. She lives about an hour away from me at home,” Cooney said. “I played Kylie (Bruder) once or twice too.”

Before coming to Illinois, she had no idea some of her former competition would become some of her closest friends.

“I think I was closest with Tyanna before coming to school. But I didn’t ‘know’ her. We’d see each other on and off the court for different things,” Cooney said. “We’re definitely close now, but we would see each other at Illinois camps since we were (high school) freshmen too.”

For some Illini, it was a natural transition from club to college volleyball. Quade says she followed in the footsteps of her older teammates in order to acclimate.

“It was a pretty natural adjustment period (to college),” Quade said. “I’m a pretty go-with-the-flow kind of person, so it’s not like I was like, ‘what do I do, what do I do?!’ It was more like, ‘oh, okay they’re doing that, I’ll do it too.’ Feeling things out.”

Donnelly says that attending Illini volleyball camps helped her adjust to the environment in Huff Hall.

“I actually graduated early, so it fell about six months before I was coming to campus,” Donnelly said. “I went to camp by myself but it was good since I got to talk to the girls and meet everyone who I’d be playing with. I saw what was coming.”

After committing to Illinois, Quade says her experience at camp became more enjoyable, as did her time playing club.

“I always just had fun with (camps), but it was definitely a big weight off my shoulders once I had that decision finalized,” Quade said. “Just being able to play without the thought of like, ‘this coach could be watching, or this coach, I really want to go there or there.’ There’s just less to think about, and it’s easier to place more focus on volleyball.”

No matter where you’re from, the club volleyball community seems to carry on into college. Poulter said the relationships she made before coming to Illinois are poised to last a lifetime.

“I think one of the great parts of collegiate athletics is that you’re going to play so many people that you know whether you’ve played with them in club or high school, USA, all of the above,” Poulter said. “It’s really fun to keep those relationships going and stay in touch with those people.”