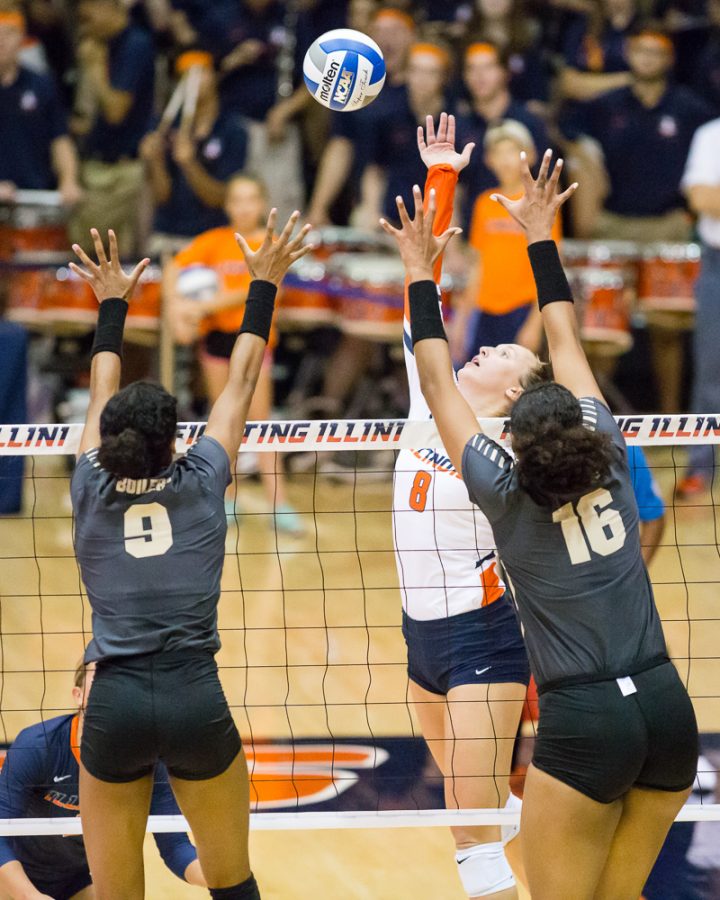 Outside hitter Beth Prince hits the ball during the match against Purdue Oct. 6. Prince is currently on the executive board of the voulunteer group SAAC.

Junior Beth Prince looked beyond the volleyball court to improve the campus she calls home.

Two years ago, Prince volunteered to represent the Illinois volleyball team on the Student-Athlete Advisory Committee (SAAC). Since then, her involvement has cultivated into a role on the executive board as secretary.

The committee is administered by the Department of Athletics and is composed of at least two representatives from each varsity sport. In addition to Prince, junior Ali Bastianelli and sophomore Jacqueline Quade are also members of the committee.

Prince said that SAAC is a way for her to support the team and the school she loves.

“I really love this place, and I was like, ‘How can I get more involved other than just being on this team,’” Prince said. “So, being on SAAC was one of the first steps in that I guess. Then running for exec was just the next stepping stone in that.”

According to Prince, the volleyball team has always been heavily involved in the organization. Although every team aims to be involved, she said that the volleyball athletes tend to go above and beyond, especially when it comes to helping the surrounding community.

“I hope volleyball can continue to be a team that pushes for SAAC and doesn’t just sit and ‘be’ on (it),” Prince said. “Another point is that we try to use our position as student-athletes to better the community. We focus on doing stuff like, ‘Hey, this group of people really loves you guys, lets go help them as a team or as an athlete.’”

Joining SAAC has given outspoken members of the team a chance to shine off the court, according to head coach Chris Tamas.

“There’s lots of different types of leadership you need to have on your team, and (volleyball’s SAAC members) really exemplify being a little bit more vocal and making sure everyone is a little more taken care of,” Tamas said.

After being involved in his own athletic counsel at the University of the Pacific, Tamas said life outside of college athletics was put into perspective for him.

“When I was a player, I was on one of those committees too, and it lets you grasp that what we’re doing is important here, but some people are still trying to get food and don’t have toys,” Tamas said. “All of these people don’t have these things that we get to have every day, so it just gives you that perspective.”

He said he is thankful his team is able to reach out to the community in a way that does not involve volleyball.

“We probably have a quota we’re supposed to (meet),” Tamas said. “But they just go above and beyond it. (The representatives) let us know if something’s going on. I always see (the team) out or see pictures of them out supporting the soccer team or softball, so it’s just a really great aspect of our team too.”

Although being an athlete has given members of the Illini volleyball squad opportunities to lead in the game, SAAC pushes the leadership model away from the court.

High school clubs gave Prince a template for leadership. But for Bastianelli, the committee gave her an entirely new experience.

“I was never really involved in (a lot of things) in high school,” Bastianelli said. “SAAC looks good not only on a resume, but as insight to other sports and things going on around the University.”