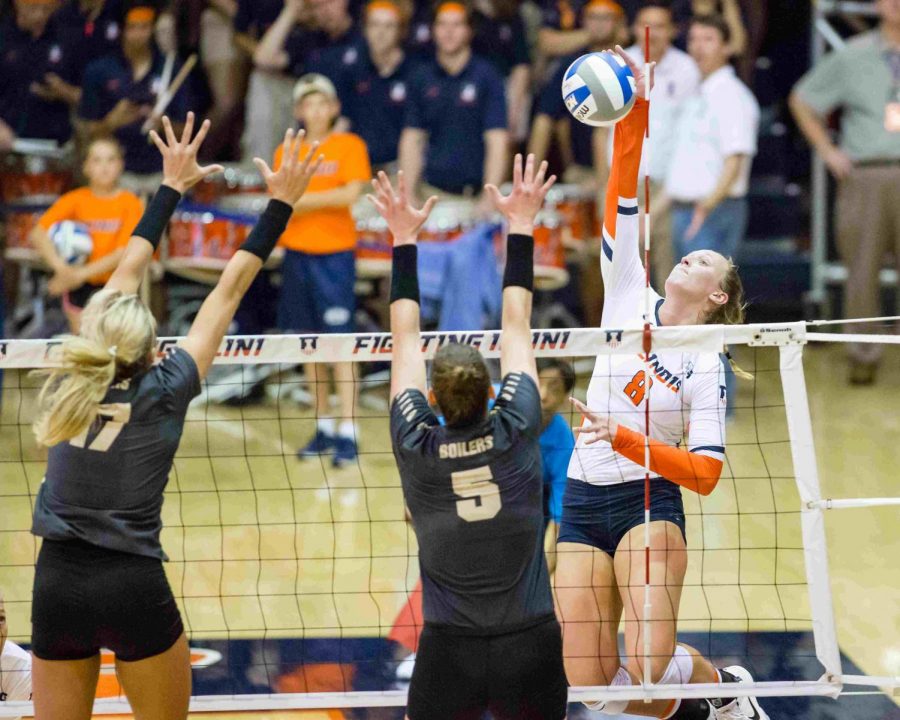 Illinois outside hitter Beth Prince (8) hits the ball during the match against Purdue at Huff Hall on Friday, October 6. The Illini lost 3-0.

The Illini volleyball team donned Halloween costumes at practice prior to Wednesday’s match against Northwestern.

Junior outside hitter Beth Prince strolled into Huff Hall for Tuesday’s practice dressed in a Peter Pan costume — complete with a pan flute. Behind her, sophomore defensive specialist Annika Gereau slid across the floor in a giraffe onesie. Head coach Chris Tamas said he planned to be “70’s Bill Walton.”

When asked if there would be a costume contest, junior middle blocker Ali Bastianelli said, “I hope so. I don’t know who’s going to win. Obviously, I hope I do.”

According to Prince, this was the first year the team held a costume-themed practice as a part of Halloween.

“This is actually the first time we’ve ever done anything like this,” Prince said. “We were going to do it last year and I think we ended up canceling practice for the day and so this year someone’s like, ‘so are we doing it?’ and we were like ‘yes, we’re doing it!’ Everyone’s in on it, so it should be fun.”

After a three-game losing streak against the some of the top teams in the Big Ten, the Illini were in good spirits. Tamas said the team learned a lot from last week’s matches.

“Looking at the whole week though, I’m proud of the efforts we gave and saw some improvements as we went through a tough stretch,” Tamas said. “We still fell a little short. We still have to learn how to play better and more consistently all the time, especially against our better opponents.”

Although this is the second time Illinois will play Northwestern, Tamas said the team is approaching the match with renewed confidence.

“We focus on one match at a time. We play Northwestern tomorrow and that’s what we’re focused on,” Tamas said. “I think that’s the only way to do it. If you look too far ahead, you might start to lose focus on what we’re doing. Every day is a new day, every rep is a new rep. That’s kind of been our philosophy since day one and since we’ve started.”

Prince is hopeful being familiar with the Wildcats’ style of play will hand her team the advantage on Wednesday.

“We know them because we have played them before,” Prince said. “We already kind of know their tendencies and now we can just kind of fine tune what we already knew and how they’ve progressed and get ready for what we think their game plan is gonna be.”

In Big Ten play, Northwestern is 3-9, while the Illini are 7-5. The Wildcats recently broke a five-game losing streak with a 3-0 win over Rutgers.

According to Tamas, Northwestern will give Illinois a chance to fine-tune gameplay before the last stretch of the regular season.

“I told them this over that stretch: you have to be out there, you have to compete, you have to be brave. There’s no other way to go out there an think about what’re they going to do,” Tamas said. “We can’t control a lot of those things. All we can control is what we’re doing on our side of the net and just kind of go from there.”

“We have to just keep grinding,” Bastianelli said. “This is the part of the season (Tamas) had mentioned to us that this is either where teams get great or some teams just kind of sink off and don’t perform like they want to, whether it’s from injury or being tired, fatigue. School’s getting harder with finals coming up in a few weeks.”