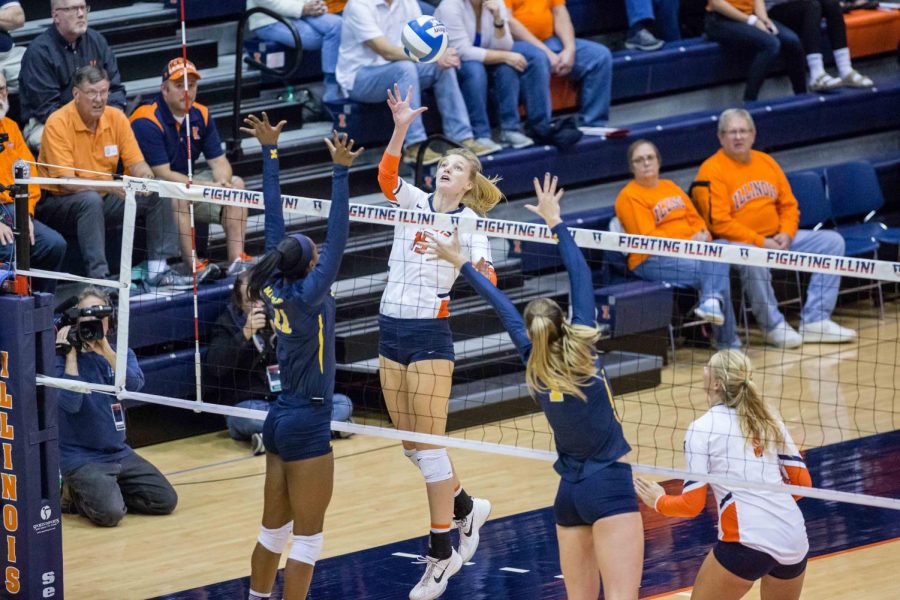 Illinois outside hitter Megan Cooney tips the ball over the net during the match against Michigan at Huff Hall on Nov. 5. The Illini won 3-2.

With 21 wins under their belt, the Illini are ready for the first round of NCAA regionals.

The door has closed on the regular season for Illinois volleyball. But after tying it all together with a three-game winning streak, the women are more than hopeful for a successful trip to the tournament this year, said head coach Chris Tamas.

Although the Illini had a sendoff to lone senior libero Brandi Donnelly last Wednesday against the Hawkeyes, the emotions of the season bled over into the final regular season contest Saturday. Tamas said that coming into the next week after three consecutive wins will keep spirits high.

“I think we’re well off with a three-game winning streak,” Tamas said. “But it’s about playing every game the way we fought through the Big Ten this year. We beat Ohio State out of a chance to get into the tournament (Saturday), and that in itself was exciting.”

Despite the Buckeyes’ domination in the first and third sets, the Illini found their edge later on in each set.

“We weren’t very good at our first touches (against OSU),” Tamas said. “But we handled the ball well and saw a lot of great things from a lot of different players.”

During the first set, Illinois saw its largest point gap of the match with Ohio State’s 24-15 lead at the end of the game. However, the second set painted an entirely different picture, with a match-high hitting percentage from freshman outside hitter Megan Cooney at .545.

The Illini clinched the second set 25-21, after the squad regained an early lead off of a Poulter serve and Cooney kill.

In the third set, Ohio State pulled ahead for a bit with a 6-2 early on. Illinois crept closer later in the game with a kill from freshman Tyanna Omazic, who narrowed the gap to 16-15. The Buckeyes capitalized off a three-point run that boosted them to the set point.

The action spilled over into the fourth set as the Illini locked into an early lead. Although Ohio State narrowed the gap to 20-19 after a massive six-point deficit, the Illini still managed to sail to the set point within three points of the Buckeyes.

Illinois put up a fight in the final showdown of the night, breaking six ties within the 15-point set.

Tamas said the challenges inside the Big Ten have helped prepare the Illini for tougher opponents that they are bound to face in the tournament. Currently, four Big Ten teams are sitting comfortably in the NCAA top 10, while Illinois is hovering among the top 30.

According to Tamas, the Illini are holding tight to the philosophy they’ve had all year — play one game at a time.

“I’m proud of the way we’ve fought all year, but we’re still looking at playing one game at a time,” Tamas said. “It’s always good to get a win, but it’s about the next game.”