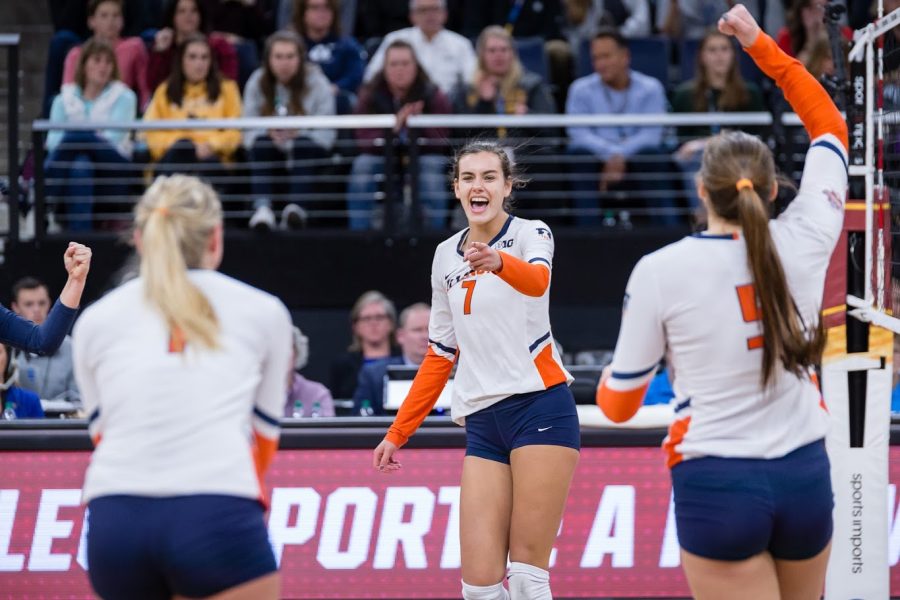 Illinois outside hitter Jacqueline Quade (7) points to setter Jordyn Poulter (1) after scoring a kill during the match against Nebraska in the Final Four of the NCAA tournament at the Target Center on Thursday, Dec. 13, 2018. Nebraska defeated Illinois 3-2.

After a heartbreaking loss in the Final Four to end Illinois volleyball’s best season since 2011, the Illini are ready for new beginnings. With a new team and head coach Chris Tamas entering his third season at Illinois, the Illini are continuing to get better each day.

“We’re just really looking to improve and that’s really been the goal since I’ve been here, just to make sure it’s one day at a time,” Tamas said. “I’m proud of the work they’ve been putting in and that’s what we want to continue to see.”

With high expectations and goals to return to the Final Four, senior outside hitter Jacqueline Quade also repeated the phrase ‘one day at a time’ when discussing how the team is approaching this season.

Quade was one of the three Illini who traveled to Japan this summer to compete in a different environment. Sophomore transfer Mica Allison accompanied Quade on the U.S. Women’s Collegiate National Team. The pair said getting to play together outside of the Illinois team strengthened their relationship on and off the court.

Freshman middle blocker Rylee Hinton also explored Japan this summer with the Big Ten Foreign Tour team. Hinton said the different style of play used in Japan helped her learn more about her own game and ability to compete with different offensive styles.

While Quade has earned her spot as a starter through her breakout season last year, Hinton and Allison are in the midst of battling for a starting spot in their respective positions.

Hinton has been competing with fellow freshmen Kyla Swanson and Kennedy Collins for the middle blocker position behind senior Ashlyn Fleming. While the battle has been tough, Hinton wanted to be challenged at the collegiate level and believes it has given her mental toughness. Freshman Ellie Holzman was also a contender for middle blocker before suffering a season-ending injury.

With record-setting setter Jordyn Poulter gone, Allison, junior Kylie Bruder and redshirt freshman Diana Brown have each been working to earn the starting setter spot. Despite the outcome, Allison says the competition aspect has helped both her, Bruder and Brown improve.

“I think it’s important we have competition everyday,” Allison said. “It’s not getting easier and it won’t. I know we respect each other a lot and we’re both fighting hard for this position. I’m going to be happy for either of us either way. We’re on the same team, we’re not enemies.”

In agreeance with Hinton and Allison, Tamas believes the level of healthy competition within the team has created a lot of room for growth and improvement as the Illini head into the 2019 season.

“If you always have that pressure, that intensity, on your level of play and your under the microscope, you get used to it,” Tamas said. “We play in a conference that’s really tough and in an  environment with three, four, five, six thousand people, so you’re going to have to do it in front of those people too.”

While the freshmen are making an immediate impact, senior like Quade, Fleming, defensive specialist Caroline Welsh, and outside hitter Beth Prince will contribute veteran experience that should create a dynamic team.

The Illini are continuing to search for that perfect balance in the lineup with less than a week until their season-opener at Tennessee. However, Tamas and his staff will have gotten a good look at the team’s ability at the Orange vs. Blue scrimmage over the weekend.

After their first match in Tennessee on Friday, the Illini will open their home season at Huff Hall on Sunday afternoon against the Vols.