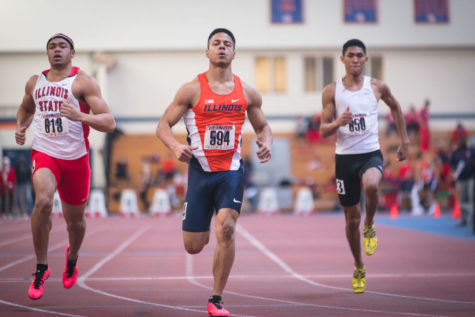 The Illinois men’s track and field team finished first in a field of 12 at EIU Big Blue Classic over the weekend in Charleston, Illinois. After finishing the first day of competition in third place on Friday, the Illini jumped to first the next day with the help of six event titles. Freshman Jonathan...

After being crowned Hy-Vee Cup co-champions last weekend at the Drake Relays, the Illinois men’s track and field team soared to No. 14 in the national rankings, the highest position the team has ever held mid-season. Now the Illini enter the final week of the regular season and head to Iowa City f...

This Saturday marks Illinois’ first home outdoor track meet since 2010. And after four years, the team is ready to put on a show for its home fans.   “We’re going to be out in full force and everybody’s gonna be out on the track,” said head coach Mike Turk. “Every event’s going to ha...

The Illinois men’s track and field team traveled south this weekend to Auburn’s Tiger Track Classic in Auburn, Ala. They were met with great conditions and were able to bring home five event titles and several other high finishes. “It's satisfying to come down into SEC-country and come home with a bunc...

The first outdoor meet of the season presented a stark difference from running indoors. Conditions were cold, wet and windy, yet the Illini were still able to score eight event titles. “We had very adverse conditions to say the least with the weather,” head coach Mike Turk said. “We really fel...

Last year, Brandon Stryganek left the Big Ten Indoor Championships with a conference championship in the 60 meters. This year he comes in with a target on his back. “It’s gonna be a little different for me because I’m defending my 60-meter title," Stryganek, said. “But we’ve had a target on ou...

The Illinois men’s track and field team had a successful home meet Saturday at the Orange and Blue Open.  The Illini competed without several of their top athletes, who rested this weekend in preparation for the Big Ten Championships next Saturday. Aside from unattached runners, only three teams competed in...

The Illinois men’s track and field team returns to the Armory this weekend for the Orange and Blue Open after a series of tough meets on the road.  Last weekend, the team split, with distance runners traveling to the Iowa State Cyclone Classic in Ames, Iowa and the rest of the team competing at the SP...