The Illinois swimming and diving team began the season with its annual Orange and Blue intra-squad meet Oct. 2 at the ARC swimming pool.SOWith both teams evenly split up with a mixture of upperclassman and freshman, the Blue team left the pool victorious with a 121-98 win.The event not only brought mu...

Illinois swimming and diving mending the departure of Meng

The Illinois record books list the names of some of the greatest athletes in the school’s history. But if you skip to the chapter on swimming and diving, there’s a name you’ll repeatedly see: Alison Meng.Meng graduated from Illinois in May as the owner of four individual and two relay school re... 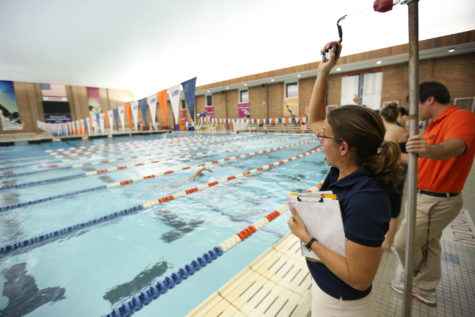 Head Illinois swimming and diving coach Sue Novitsky will finally get an opportunity to gauge how her team’s hours of practice and summer swim schedules helped her players in the teams’ first intra-squad meet on Oct. 2.The Illini will compete against each other at the ARC pool, their home arena and...

When she attended Champaign Centennial High School, Illini swimmer Audrey Rodawig was only two and a half miles from the University of Illinois campus.To put that into perspective, that’s just a bit further than going on a run from the ARC to the Engineering Quad, and back again.After spending her ...

Expectations grow with release of 2015/16 swimming and diving schedule

The Illinois swimming and diving team announced its upcoming schedule for the 2015-16 season last week. The Illini face four Big Ten teams, with three of those contests taking place away from home — a tougher schedule than in years past. In 2014, Illinois’ lone away Big Ten meet was a 160-140 loss at ...

After finishing the 2014-15 season with a 6-4 dual meet record, along with 42 changes to the individual record books, the 2015-2016 season looks to be a promising one for the Illini swim and dive team.Sophomore Samantha Stratford will be a crucial part of any success Illinois will have in the pool t...

Swimming, diving finish season in lower half of the Big Ten

While the season’s results were far from spectacular, the Illinois swimming and diving and diving team always gave its fans a good showing at home.After competing on the road for the entirety of the first half of the season, the team finished off the regular season with four-straight home meets.The...