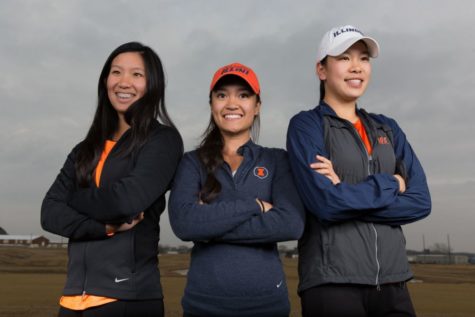 Despite a disappointing end to its season, the Illinois women’s golf team has a lot to look forward to. The team was not selected to participate in the NCAA Regional Tournament despite a fourth-place finish in the Big Ten championships after being given an eight seed. Although not selected, Illinois’...

The Illinois women's golf team had a week to prepare for the 2015 Jim West Challenge, but it still won’t be easy for the Illini to finish atop the leaderboard at the tournament.RBFor the second-straight week, the Illini are competing in Bermuda grass, which is thicker than the grass o...

It’s been a week since the Illinois women’s golf team’s eighth-place finish at the Mercedes-Benz Invitational. Now the Illini head to Boerne, Texas, for the Jim West Invitational, and in preparation, they’re purposely getting distracted.Junior Stephanie Miller made up fake rules during practice ...

Stephanie Miller, a junior on the Illinois women’s golf team, joked about dumping dried Korean squid down teammate Bing Singhsumalee’s bag Tuesday. “It’ll smell like fish for a while,” Miller said, jokingly. “Yum!”It’s not hard to notice Singhsumalee and Miller’s friendship, which sta...

Illinois takes swing at new — yet old — grounds in Knoxville

TWEET: The Illini are new to Knoxville, so coach Renee Slone and her husband are advising the team to focus on its short game.

Illini look to bounce back this weekend at Iowa City

The women’s golf team takes to the tees in Iowa City, Iowa this weekend for the Diane Thomason Invitational, where the Illini look to improve on their first two outings. The Illini have been up and down in their first two starts of the year, carding a third-place finish at the Ptarmigan Ram Fall Classi...